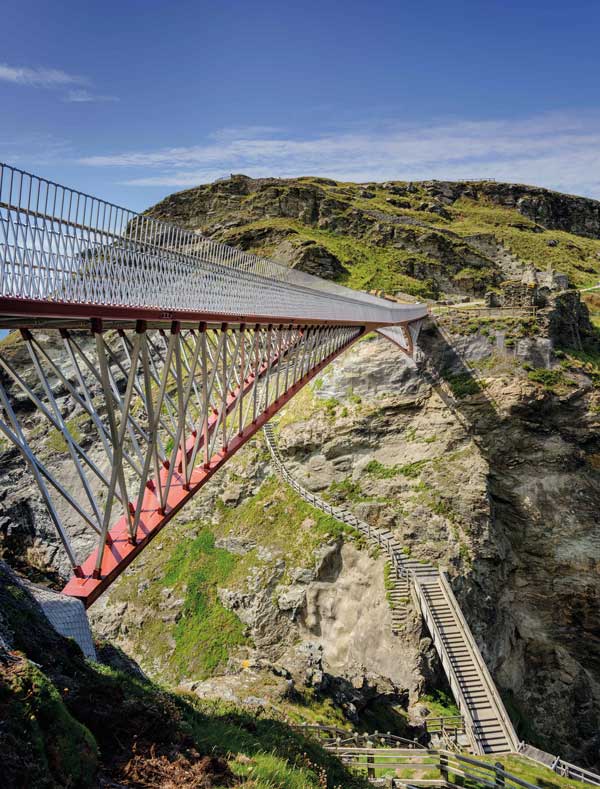 For the first time in more than 500 years, the two halves of Tintagel Castle have been reconnected after the installation of a new steel footbridge.

Now separated by a steep gorge, the castle, which is predominantly positioned on a headland, was once linked to the mainland and its gatehouse by a narrow strip of land that was lost to erosion sometime during the 15th or 16th century.

The recent opening of a new footbridge has restored this link, allowing visitors to once again walk in the footsteps of the site’s medieval inhabitants.

Fabricated in Plymouth by Underhill Engineering and designed by structural engineers Ney & Partners alongside William Matthews Associates architectural practice, the bridge consists of two independent 33m-long cantilevers that reach out from either side of the gorge and almost touch in the middle. 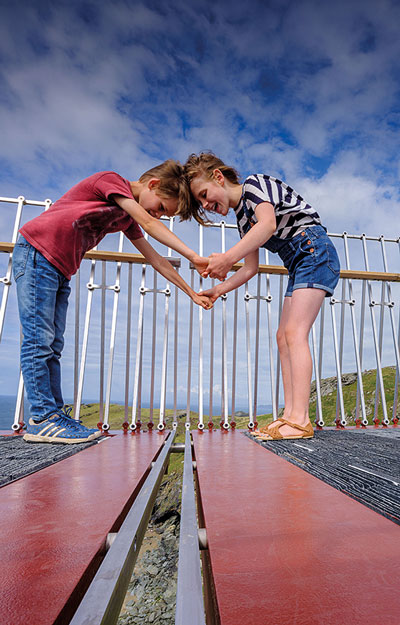 The cantilevers nearly touch in the middle of the bridge 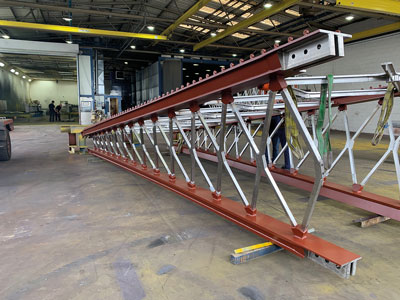 The steel assemblies have finger joints that connect with adjoining sections

At the centre of the bridge, a narrow gap (40mm) has been designed to represent the transition between the mainland and the island [headland], the present and the past, history and legend.

“Steel was the only choice for the bridge as we needed a lightweight solution, and one that could be fabricated offsite into deliverable pieces,” explains project Architect William Matthews.

Getting the steel elements to site was just one of the challenges that needed to be overcome as the gatehouse can only be accessed by one narrow lane. A multi-axle vehicle was used to deliver the steelwork and navigate the winding road.

Lifting the steel into place was another significant challenge. With no room or access for a crane in the gorge, which is more than 60m-deep, or on either side, the construction team utilised a lifting procedure not often seen the UK.

A cable crane, which are used in the Alps to install power lines and ski lifts, was installed across the gorge. It had a 5t lifting capacity, could pick-up steel elements from a small delivery yard on the headland and subsequently fed the construction of the bridge’s two cantilevers.

None of the bridge’s steel elements exceeded the cable crane’s capacity, while the largest two pieces, each 10m-long × 4.5m-deep and installed at either end of the cantilevers where the structure meets the abutments, where within a size that was transportable on the access route.

All of the steel elements were fabricated by Underhill into fully assembled and erectable pieces, that included a top and bottom cord, bracings and cross members.

A total of six pieces were needed for each of the cantilevers and they are formed from a combination of mild steel and stainless steel parts.

“As the bridge is in a very aggressive environment with plenty of wind-borne sea salt around, we chose mild steel for the parts which can be easily repainted and stainless steel, which is more resistant to corrosion, for the areas where painting would be more difficult,” explains Mr Matthews.

This means the bridge’s main top and bottom cords are fabricated from mild steel, while the bracings and cross members are stainless steel.

The connection points between each individual steel assemblage [two on each piece] are also fabricated from stainless steel and were welded to the main cord members during the fabrication stage. The connections consist of finger joints that interlock with opposite members on the adjoining section, similar to a woodwork dovetail joint. Once the individual sections were lifted and manoeuvred into place during the erection programme, the connections were then bolted up.

Underhill’s fabrication process required some precise engineering and each section was trial erected with its neighbouring piece to ensure the two cantilevers could be seamlessly erected on-site.

During the erection programme the permanent handrails, along with temporary floor boards, were installed to create a safe working environment. The erection team took delivery and erected at least one bridge section every day, and once the two cantilevers were fully erected, the slate flooring was installed.

The bridge is part of a larger £5M programme of works at Tintagel Castle which also includes improving footpaths around the site, helping to limit the impact of visitors on the unique archaeology and ecology. 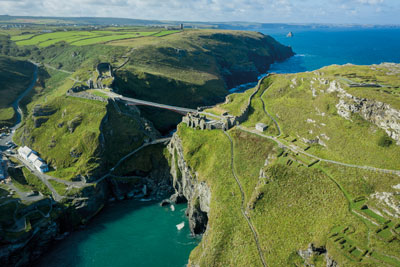 The medieval scholar Geoffrey of Monmouth wrote that the Tintagel land-bridge was so narrow that “three armed men would be able to defend [it], even if you had the whole kingdom of Britain at your side”.

Legend also has it that the King of Britain, Uther Pendragon – transformed by the wizard Merlin into the likeness of the Duke of Cornwall – stole across this passage way into the castle where he spent the night with the Duke’s wife, Ygerna, who later gave birth to the future King Arthur.

Allegedly so impressed was Richard, Earl of Cornwall by the Arthurian myth that in the 1230s and 1240s he built a castle at Tintagel, with the land-bridge an integral part of its design.

The bridge at Tintagel, designed by Ney and Partners and William Mathews Architects, is exposed to a coastal environment so material selection is a key design step. Richard Henderson of the SCI, with a review from Matthieu Mallié of Ney and Partners, discusses some of the issues. 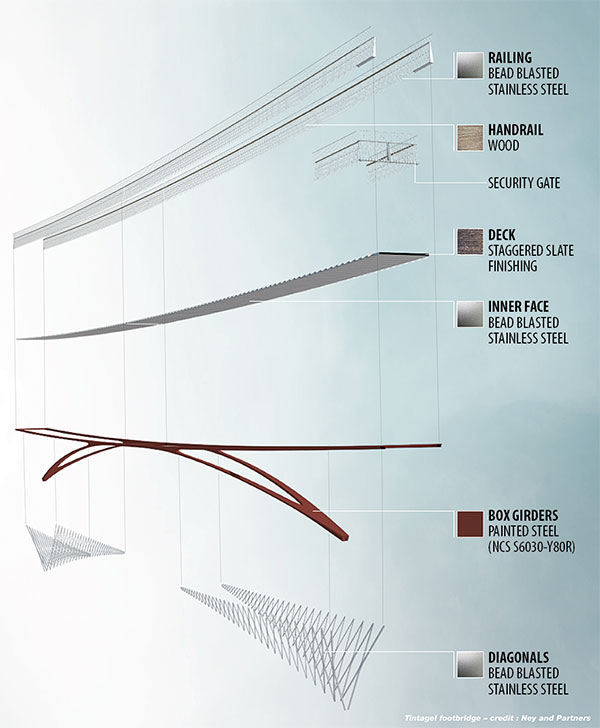 The Ney and Partners/William Matthews Architects successful competition entry for the Tintagel bridge involved approximately 33 m long cantilevers reaching out from each cliff face. The design included delicate balustrades and structural bracing for carrying shear forces and more substantial tension and compression top and bottom chords to transfer the bending moments back to the abutments. The fact that the original land bridge was lost a few hundred years ago underlines the exposure of the site to the power of the Atlantic Ocean. The choice of material was affected by durability, maintenance requirements and visual appearance. In the competition entry, weathering steel was to be used for the main top and bottom chords and duplex stainless steel for all other steel elements. SCI was engaged by English Heritage to assess the suitability of different steels through a programme of corrosion tests at the site, in collaboration with the design team and Arup Materials.

The table of corrosivity categories in ISO 9223 lists category “C5 very high” with the example description for a typical external environment including “… coastal areas with high salinity”. The predicted thickness loss for carbon steel in the first year of exposure is given as >80 to 200 μm.

Corrosion tests on steel samples were carried out over a one-year period to determine the rate of corrosion and suitability of steel for the project before the choice of material was finalised. The C5 corrosivity category of the site was confirmed by the tests and data on the rate of steel loss collected. Following the completion of the assessment, weathering steel was showing a potential 70 to 120 year life span depending on the prediction models. Nevertheless, the Client could not accept the risk of an unexpected corrosion rate and a painted carbon steel solution was chosen for the tension and compression chords.

The more slender members of the bridge which form the “Telford” diagonals of the cantilevers, the bridge deck (the trays in which the slates are placed), its shear bracing in plan view and the balustrades are made from stainless steel. The stainless steel chosen was duplex grade 1.4462, which has very good resistance to corrosion combined with high strength.