Healthcare in the frame 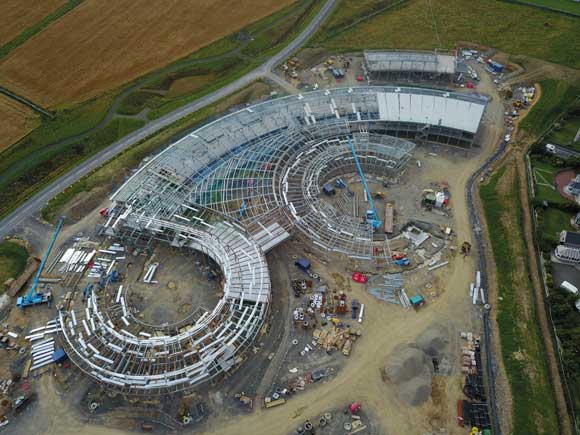 A number of challenges have had to be overcome during the construction of a new hospital in the Orkney Islands. Martin Cooper reports from a project where steel has ticked all the boxes.

FACT FILE
New Orkney Hospital and Healthcare Facility, Kirkwall
Main Client: NHS Orkney
Architect: Keppie
Main contractor: Robertson Major Projects
Structural engineer: AECOM
Steelwork contractor: BHC
Steel tonnage: 1,200tHealthcare in the Orkney Islands is set to be transformed by a new £64M hospital and healthcare facility which will provide a state-of-the-art clinical environment for the delivery of health services, and with the introduction of new technologies and facilities will reduce the number of people having to travel to the Scottish mainland for routine care.

Replacing the existing Balfour Hospital, the new facility, which opens in 2019, is currently being built on a greenfield site on the outskirts of Kirkwall, the Island’s largest settlement and capital.

The project is said to be the biggest construction job on the Orkney Islands since St Magnus Cathedral was completed in the 12th Century. In recent times, it is certainly the largest project since the construction of Kirkwall Grammar School and Pickaquoy Leisure Centre [see NSC April 2012].

Apart from the Cathedral, all of the aforementioned projects have used structural steelwork as their main framing material.

Steel has a number of advantages over alternative framing solutions when it comes to construction on outlying islands [see box below].

“A composite steel solution with metal decking was the best choice for the hospital, as other framing materials simply wouldn’t have worked,” explains Mark Dalziel, Senior Project Manager for Robertson Major Projects, which is delivering the project.

“For instance, there is only one concrete batching plant on the Orkney Islands and they could not have supplied our needs. Installing our own plant would have been very time-consuming and wouldn’t have been cost-effective, so steelwork, which can be brought over from the mainland by ferry ready for erection, was the best option.” 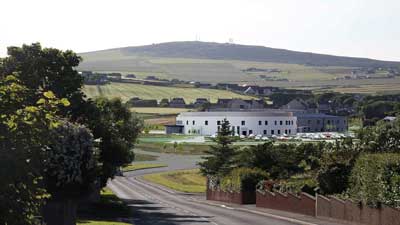 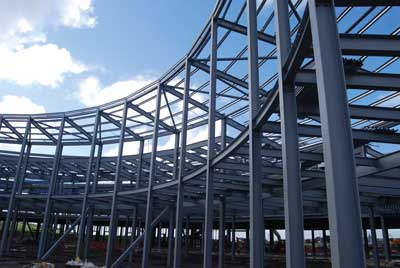 Minimising vibration generated by footfall is an important issue for hospitals, particularly in areas accommodating wards and operating theatres. At this hospital, all of these facilities are located on the first floor and, to minimise vibration, the composite reinforced concrete floor slab has been designed as 300mm thick, as opposed to a more conventional 150mm in less sensitive areas.

Supporting the thicker slabs, the design has also required the use of short-span heavy steel beams and two additional lines of columns, further negating the potential for vibration issues.

Importantly, the hospital has a very complicated design and shape, necessary to support the required clinical adjacencies and flows, and this also lent itself to a steel composite solution.

The two-storey structure incorporates two inner circular courtyards, one completely enclosed by the building, and the other a partially enclosed horseshoe-shaped yard with an opening.

In between the courtyards there is a connecting hub containing the main entrance, restaurant, a shop and main waiting area. Adjacent to the hub and courtyards, and joining them altogether, the main hospital building is a long-curved structure.

“The plan geometry of the design is very complicated and the curved longitudinal grids are based on a number of different radii. We’ve used straight steel beams for most areas, effectively faceting the frame between grids, although for the tightest curves we’ve used curved steel members,” says AECOM Project Engineer Chris Denton.

Utilising steelwork supporting metal decking has also made it easier to form the required curves in the floorplate.

“Metal decking is fairly easy to cut on-site compared to the alternative precast flooring solution, which would have been far more challenging and time-consuming,” says Mr Dalziel.

Predominantly the steelwork is based around a fairly regular 6m grid pattern, at least as far as the perimeter columns are concerned. However, internal columns arranged around the tighter curves of the courtyards have been adjusted accordingly, presenting the scheme with a grid pattern that can also vary from 4m up to 7m spacings.

“There may be three columns positioned along the outside perimeter of a curved area, but the inside of the curve only requires two columns,” explains Mr Denton.

The hospital’s configuration is fairly standard throughout with a central corridor running down the middle of most parts of the building, separating rooms on either side. The corridors are where the services are located just below the steel first floor and roof beams.

As hospitals are heavily serviced, and this one is no different, some services have had to be accommodated within the beam’s depth, via a series of bespoke holes.

“In some areas, we would have had severe congestion without running some services through the beams,” says Mr Dalziel. “Having a BIM model to share with the steelwork contractor BHC and all of the other team members meant that we could avoid clashes and provide sufficient room for services.”

The entrance to the hospital is accommodated within a large central column-free space known as the hub. This double-height space will have a series of north lights positioned within the roof, allowing plenty of natural light into the hub.

The hub is formed with a series of 15m-long rafters creating the required spacious zone.

From the hub the southern courtyard can be accessed. This totally enclosed outdoor area will be landscaped and feature a sensory garden and seating to create a sheltered area for visitors and patients alike. The other partially enclosed courtyard will be an outdoor area for a range of users.

The building’s steel frame derives most of its stability from vertical diagonal bracing, positioned in internal partition walls and perimeter areas where there are no windows. This has worked well for the ground floor where the GP practices, dentistry, outpatients, staff areas and kitchens are located.

The first floor, which predominantly has operating theatres and patient rooms – all en-suite single occupancy units – has been designed with more flexibility in mind. Stability to the steel frame on some parts of the upper floor is therefore provided by moment frames.

Using moment frames instead of bracing has allowed the scheme the flexibility to change partition walls and room layouts right up to the last minute, without causing any undue issues to the steelwork contractor’s fabrication programme.

Summing up, NHS Orkney Chief Executive Cathie Cowan says: “This development will match our aspirations to deliver the highest quality care and services from fit-for-purpose facilities.” 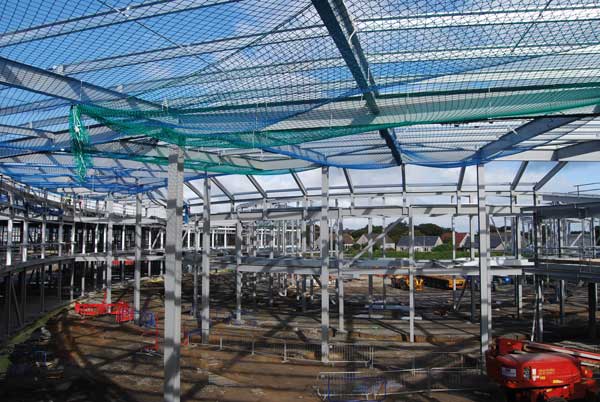 Delivering a major healthcare project on the Orkney Islands presented main contractor Robertson Major Projects with a unique set of challenges. To solve these, it took into account the remoteness of the island, supply chain logistics, local landscape, and challenging climatic conditions.

For example, procuring and shipping construction materials, such as steel, to the island and storing on-site well in advance of programme requirements reduced the vulnerability of the project to extreme weather conditions.

Steelwork’s speed of construction was also vital as the envelope of the building is designed to take into account the available trades on the islands and to achieve an early wind and watertight position, thereby allowing internal trades to progress despite inclement weather.

Phil Francis of the SCI discusses design for vibration mitigation

The vibration requirements for hospitals are the most onerous that a typical designer might encounter. Vibration design should always be considered at every stage of the design process, since it is quite usual for vibration requirements to dictate both the thickness of slab required and the maximum spans. The 300mm slab specified by AECOM for sensitive areas of the Kirkwall hospital project is not atypical.

The SCI’s key publication concerning vibration is ‘Design of Floors: A New Approach (P354)’ 1. In addition to the guidance for ordinary structures, Section 8.2 gives specific advice for hospital floors. A limiting response factor of 1 is presented for operating theatres and 2 for wards, derived in accordance with ‘Health Technical Memorandum 08-01 (HTM 08-01)’2. Designers should also be aware that hospitals often include sensitive equipment, such as MRI machines, which may have specific vibration requirements, which should be sought from the manufacturer.

P354 presents both a simplified assessment methodology and a finite element method. The simplified method combines the individual natural frequencies of the elements into a system frequency, which in combination an approximate model mass allows the acceleration of the floor to be calculated. As with any simplified method, conservative assumptions have been introduced. The implications of these assumptions on the sizes of the structural elements can be large, especially in the most sensitive areas. For this reason, the simplified method is recommended only for initial design.

Finite element analysis represents the best available tool for vibration design. In recent years the requirements of P354 have been implemented in a large number of software packages. The designers of the Kirkwell Hospital made use of Autodesk Robot. Other software packages known to have implemented the P354 method include Masterseries and OASYS GSA.

The requirement for such large slabs and beams can result in a considerable ‘structural depth’, which may be an issue for some designs. In this situation, various ‘shallow floor’ systems are available, which allow for the beams to be integrated into the slab. Testing of the proprietary slimdek system has shown good performance in hospital applications3.