The Victorian facade was retained from the original building

When City financier Julian Simmonds was unable to find the perfect London apartment for himself and his family he decided to build his own. The smart money backed a steel frame for what will be one of London’s most exclusive developments, reports David Fowler.

More and more people are nowadays realising a dream to build their ideal house, but Julian Simmonds has taken the idea to a completely new level.

Searching for a London apartment, the former executive vice-president of Citigroup found to his frustration that nothing on the market seemed to meet his requirements.

Then, by chance, he noticed an empty former King’s College building, whose elegant Victorian façade stretched for over 100m along Manresa Road in Chelsea. He decided it would be ideal, bought it and gained planning permission for redevelopment.

By the end of this year it will have been transformed into London’s most exclusive and luxurious residential development, its 15 duplex, triplex and penthouse apartments offering buyers the sort of clear space hitherto only found in Docklands lofts.

Behind the retained façade of the original 1895 building, steel has been adopted as the construction material most suited to creating the clear spans needed to give residents the maximum freedom in how they use the interior space. 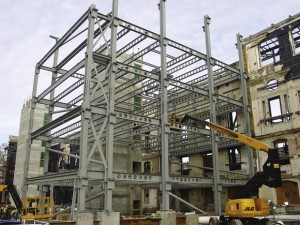 Cherry-pickers with articulated arms could reach across the 13m bays 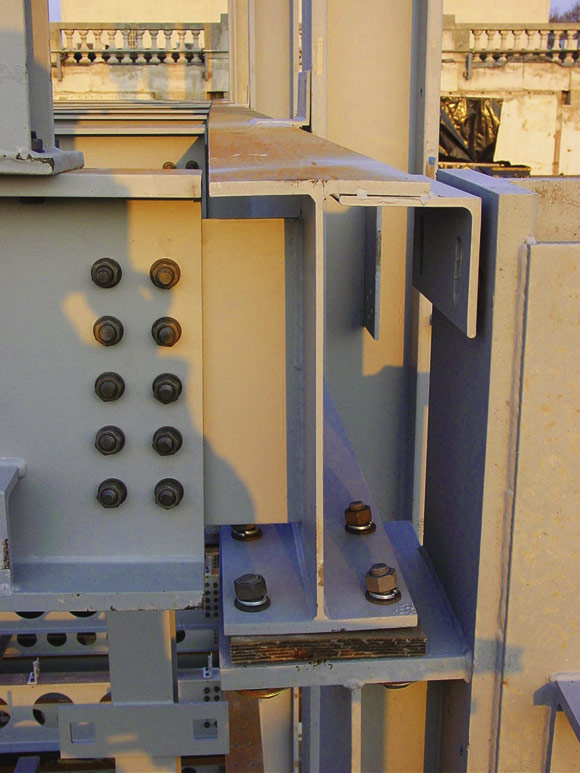 Heavy acoustic damping pads were used in the steelwork connections 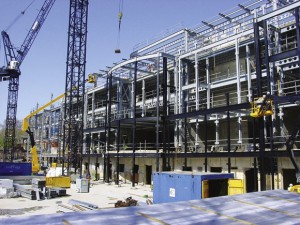 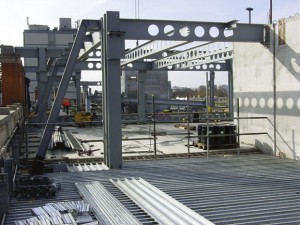 Mr Simmonds and co-developer Candy and Candy describe the development as “eight star”: taking as the benchmark in quality the world’s most luxurious hotels such as the seven-star Burj Al-Arab in Dubai, George V, Hotel de Paris and the Bellagio, it indicates that Manresa Road goes one step better.

For the residents, who will start to move in later this year, the multi-million pound purchase price will be just the start. The apartments are being sold on a ‘shell and core’ basis at prices from around £7M–£15M and buyers can expect to lay out another £7M or so for fitting out.

21 Manresa Road will offer residents, Mr Simmonds says, “flexibility, huge rooms, an M&E specification that’s never been done before and a flexible structure. The quality will be unprecedented in the residential sector, and residents will have the flexibility to create big spaces.” Others seem to agree such a mix is missing from the market, as there seems to be no shortage of potential buyers.

The new structure is divided into eight 13m wide bays running from front to back and will comprise just 15 apartments: eight single width triplex (three storey) units, four double width duplex units, and three triple width penthouses. There is a raised ground floor, a first floor, a mezzanine level and a second floor. Room heights, dictated by the existing windows of the façade, will be in the region of 4m. In the duplex apartments the mezzanine floor will be made of timber on Metsec purlins, so that it can be removed to create a stunning double-storey space.

An initial concept design in reinforced concrete had been developed when in early 2003 structural engineer Michael Barclay Partnership was consulted on the design. “We put forward a steel option because we thought going for wide-span construction would give the interior designers and architects a lot more freedom,” says partner Tony Hayes. Adopting concrete would have meant using internal columns, or beams of a greater structural depth that would have carried a penalty of reducing the storey heights. “We came up with a steel alternative that removed four internal columns in every unit, and confined the structure to the line of the  party walls,” says Mr Hayes.

Universal columns along the party walls at around 2m centres support cellular beams spanning the full width of each apartment to create a column-free space. “Because the client is selling the apartments as shells we wanted to give them a blank canvas, so they wouldn’t have to go back later and employ another engineer if they wanted to remove a column or modify the structure,” says Mr Hayes. He adds: “The beauty of the scheme is that we can generate a service zone within the depth of the Fabsec beams.”

Design of the cell beams, which was undertaken by steelwork contractor Bourne Steel, was complicated by a number of factors. One is the number of holes for services. “There are 300mm holes at 450mm centres, with a number of additional holes for ductwork over and above that,” says Project Manager Rob Sperring of main contractor Multiplex.

Second, an unusually onerous deflection criterion applied. The deflection of the cellular beams under subsequent fitout loads, both imposed and dead, is limited to 1/750 of the span rather than the usual 1/360.

This is partly to protect expensive finishes such as marble floors which would be susceptible to damage, and partly because stiffer beams are less able to transmit vibration. The beams are pre-cambered to take out deflections under construction loads.

Preventing sound propagation was necessarily a key concern. The primary beams in each unit run from front to back of the building, one on each side of the main columns and supported by brackets. Blockwork party walls are built off these beams so that between each dwelling there are two walls separated by a void of around 700mm, which also acts as a vertical service duct.

Both the primary and secondary beams rest on Tico acoustic attenuation pads. In addition the fixing bolts are fitted with sleeves, collars and washers to prevent sound being transmitted through them.

Vertical sound transmission is taken care of by the composite steel/concrete floor construction, with 150mm concrete on top of Richard Lees Holorib decking. Residents are thought likely to add over 100mm of their own finishes, probably with esilient material beneath. “Effectively there’ll be 250mm of concrete on top of the beams,” says Mr Hayes.

The construction timetable was tight. Demolition of the old structure and other buildings on the site began in January last year. Steelwork contractor Bourne Steel was appointed and integrated into the design phase from late summer 2003. Steelwork erection started on 16 December last year, after work on the basements had been completed.

“Everyone said we were crazy starting four days before Christmas,” says Rob Sperring “but it highlighted a number of problems which Bourne worked on over Christmas. It gave us momentum so that when we came back in January we could hit the ground running.”

Access was difficult because of the huge tubular bracing members supporting the retained façade, which crossed the site diagonally. Bourne Steel brought in two special Genie cherry pickers whose telescopic booms were fitted with “droop snoots” or articulated arms, giving them a reach of 25m.

“They could stand outside a bay and reach back to the far side of the bay next door,” says Bourne Steel Divisional Manager Rod Potts.

Another advantage of the machines was that they allowed the steel to be fixed without the erectors having to walk on the steel itself at all.

The steel was installed bay by bay, with the cherry pickers standing on the garden area, erecting the steel to its total height at the front and cascading back. This allowed following trades to get to work more quickly than constructing a level at a time over the building’s complete width.

Installation of the steel is heading for completion this month, on schedule despite a design change to the roof steelwork. Angled rafters were introduced to form the profile of a mansard roof at penthouse level. “This transferred loads all over the place,” says Potts. “The rafters were picked up by the gable beam, which needed a column to the second floor. Some of the beams that were already in fabrication had to be redesigned.”

But between two and three weeks were recouped by changing the construction sequence, and the frame will be completed on programme or ahead.

This bears testament to what all concerned agree is a strong co-operative team spirit between everyone on site. “We have a good relationship with Multiplex,” says Potts. “In site meetings we sit down and thrash out problems without animosity.”

Multiplex’s Rob Sperring says: “All the contractors are here because we want them to be. Bourne was selected because they’ve worked with us before and are recognised as a non-adversarial company who deliver.”

The on-site atmosphere has been helped by the close personal attention given to it by Julian Simmonds, who is on site most days, and the feeling that everyone is working on something unique.

The first apartments are due to be handed over to their new owners in September, and the development is certain to become one of London’s most prestigious addresses.

From art school to prestige address 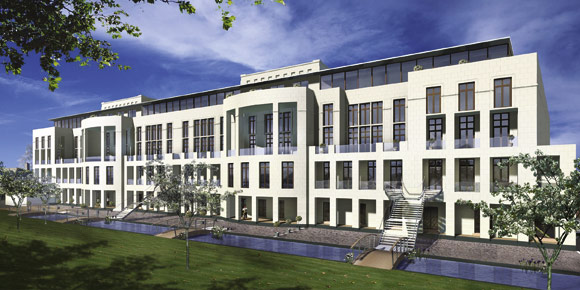 21 Manresa Road was designed by the architect J M Brydon and completed in 1895 for South-West London Polytechnic. During the 1930s it became Chelsea School of Art. In 1985 the building was transferred to King’s College London, which used it as a research facility until 2002.

Only the façade of the building has been retained. An additional entrance on the right hand side, symmetrical with the existing one, has been created. Residents of the new apartments will enjoy such luxuries as air-conditioning circulating 20 litres of air through the apartments every second, high-speed security gates to the basement car park operated by number plate recognition, and to the rear of the apartments the largest private garden to be created in London since World War II.

A man with a vision 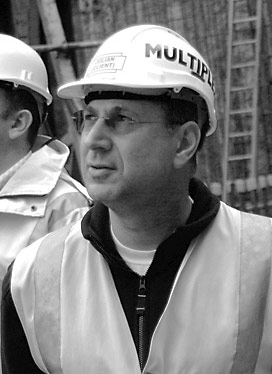 When Julian Simmonds retired from Citigroup, where he was an executive vice-president, after 29 years, he wanted to move into the ideal apartment.“I was looking for a lateral flat,” says Mr Simmonds, “something with 5–6,000sq ft of space without stairs, but I could never find anything suitable.”Discovering the Manresa Road site, he formed the idea of buying it and developing his own.“The quality will be unprecedented in the residential sector,” he says. “Buyers will be able to create big spaces. We’ve gone with steel because it gives the flexibility to form 60 x 40 ft rooms, and allowed people the freedom to do whatever they want.”

Candy & Candy was brought in as project manager after he gained planning permission. Mr Simmonds pays tribute to the construction team: “I’ve been very happy with Multiplex and all the subcontractors. There’s a good relationship between all of us. People like working on a prestigious site; we’re spending the money we need to get a good job, being fair, and people have responded  very fairly.”

Mr Simmonds points to the flexibility of the structure and the ability to create huge rooms as factors which are attracting buyers. In addition there is a very high M&E specification, including full air-conditioning with humidification and air cleaning, and the choices for heating by warm air, underfloor, or radiators. An uninterruptible power supply will provide 48 hours’ backup in the event of a power cut. And all the plant is designed to cope with the theoretical maximum number of people the apartments could hold, about 1500.

“It’s not a problem that the apartments cost a lot of money,” he says, “if you provide value for money.”

Mr Simmonds intended Manresa Road to be a one-off, but does not rule out further property ventures if the right opportunity comes  up.