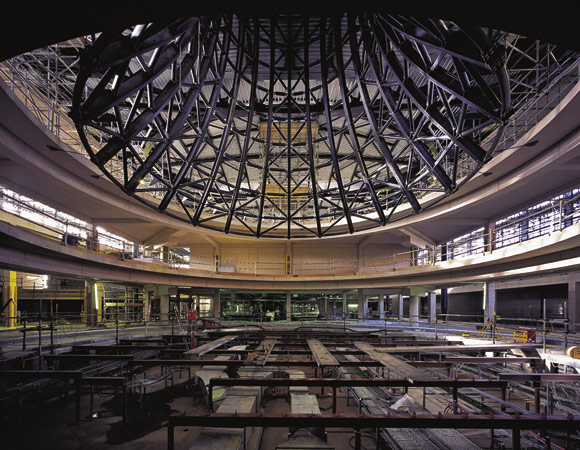 The brief for the roof of the Welsh Assembly building was simple: it should appear to float. Putting the vision into practice was more difficult.

Dramatically sited on the edge of Cardiff Bay, the new Welsh Assembly building is nearing completion, with contractors working flat out to meet the handover date at the end of August. Unlike many prestigious projects, it looks set to be on time and on budget.

The building’s most striking feature will be the complex steel roof. Supported on 12 slender columns and surrounded by a glazed public area, the roof is intended to appear as if it is floating in the air.

It consists of six shallow but elongated domes or blisters, one of which is pierced by the inverted funnel which rises majestically over the debating chamber. 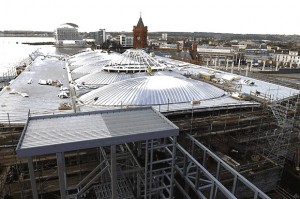 The roof consists of six shallow ‘blisters’, one pierced by the debating chamber’s ‘funnel’ structure 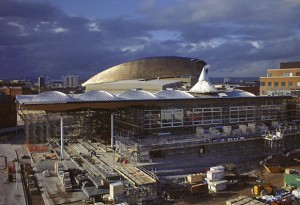 Structural engineer Arup had the job of creating a lightweight structure. The roof was originally conceived as a flat plane but that would have meant a heavier form of construction. The shallow domes were adopted as a structural form with built-in rigidity.

Each dome’s main structural members are two arched ribs canted over at 45° to the vertical. The horizontal thrust generated at the ends of the arch is resisted by ties running across each bay alongside the dome.

SH Structures fabricated and erected the steelwork. Estimating Manager Peter Redfern says fabricating the complex structure would have been extremely difficult without a 3D CAD model, which was created in X-Steel: “Not only is each bay curved, there is also a camber to take out live load deflections.”

The most complex elements of the structure were the large nodes at the top of the CHS columns,  fabricated from a combination of open, hollow and plated sections. This forms a transition to the circular hollow section members around the base of the dome. The arch members are also CHS sections, with purlins formed from channels.

The dramatic funnel structure over the debating chamber has curved universal beams as its main ribs, with circular hollow sections spanning between. “The only heavy sections are around the edge of each bay and at the top of the columns” says Mr Redfern.

The funnel is integrated into the main roof steelwork at the top, and drops down below roof level where its base is supported by a concrete ring beam. Above roof level it forms a tapered, glazed lantern topped by a 6m tall rotating wind cowl — the biggest of its type in Europe, inspired by the traditional oast house — which is part of the building’s natural ventilation system.

In the final condition, permanent diagonal bracing members formed from high tensile bar run from the top of the columns, which are pinned at the base, to ground level.

Temporary stability during construction needed careful consideration — the structure was not inherently stable until it was complete. “There was quite a lot of temporary support needed, which we supplied using Tirfors and temporary bracing members,” says Mr Redfern. “We carried out a trial erection of each bay at our works so we were confident it would go together as intended. That was a big help on site.”