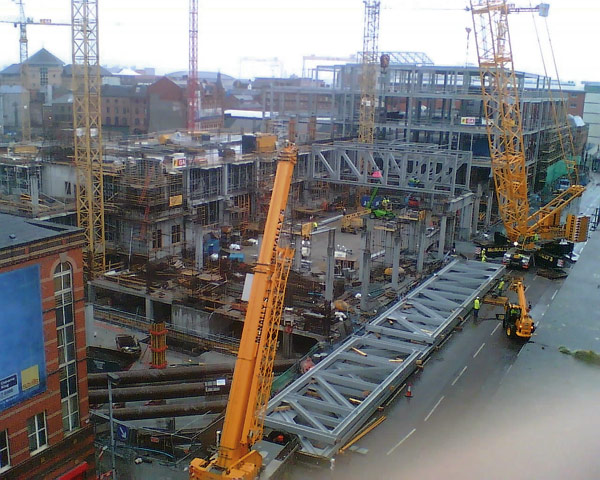 Many of Belfast’s city centre streets were recently closed over two weekend nights as seven large steel trusses were transported from the Harland & Wolff shipyard to the Victoria Square development.

Brian Keys, Project Manager for steelwork contractor Fisher Engineering said: “The trusses are so big they had to be fabricated off-site. Space is also at a premium at Victoria Square, so we delivered the elements to the shipyard and welded them together there.”

Fisher Engineering secured a rolling road closure for a Friday and Saturday night. The trusses were individually transported by lowloader over the first night and stacked beside the project.

The following night, one street beside the development was shut as the seven trusses were lifted into position by a 1,000 capacity crane.

The trusses support four levels of apartments over a retail service yard. “To allow for an unobstructed area without supporting columns, we had to have extremely large trusses,” Mr Keys explained.

The £300M Victoria Square project includes 75,000m² of retail space and 90 residential apartments. It is scheduled for completion by early 2008.