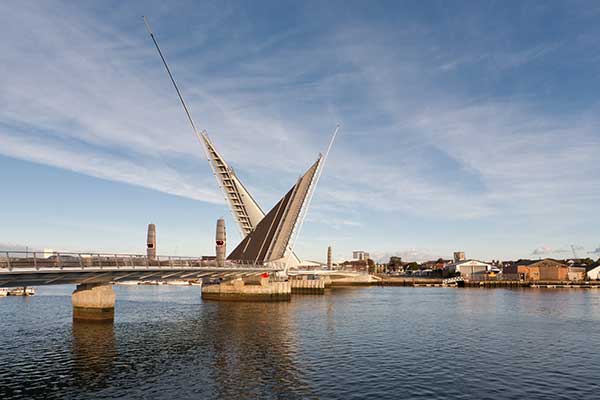 In the latest of our Projects Revisited series, Martin Cooper reports from Poole harbour’s iconic second crossing which has become a benchmark for future developments in the Dorset town.

Spanning the harbour, the bridge connects Poole Old Town to Lower Hamworthy. Working in conjunction with an existing bridge, it opens almost hourly for maritime traffic and therefore the design has been driven by the need for robustness and reliability.

As well as providing a much-needed second crossing, the Twin Sails Bridge provides critical infrastructure for 26 hectares of brownfield land, one of the largest regeneration areas in the South West.  Over the next 10 to 15 years, the regeneration is expected to deliver around 2,000 homes and create up to 5,000 jobs. 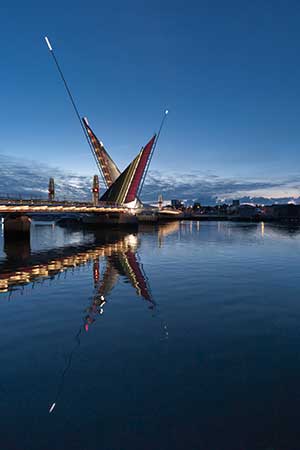 The bridge provides a new landmark for Poole harbour

“The bridge is and will act as a spur for regeneration,” says Borough of Poole Engineering Manager John Rice. “But as a second crossing it has also helped to alleviate congestion in the town and make the local bus services more reliable.”

A boost to the regeneration of the area it may be, but the bridge has also gained an iconic status due to its shape and design.

Poole is proud of its maritime and industrial heritage and this is reflected in the world-class design of the bridge – with its two triangular shaped lifting leaves symbolising the sails of a yacht.

“It has become a benchmark for any future developments in Poole,” adds Mr Rice. “The design is highly individual and the local community and visitors alike have all responded very positively about the bridge.”

Wilkinson Eyre Project Architect Simon Roberts agrees: “The public has definitely warmed to the bridge and it has become a local landmark.

“This is especially evident when it opens bacause you don’t need to be at the quayside to view the structure as the tips of the lifting spans can be seen from certain parts of the town centre.”

Lightweight design
The low level bridge has five spans, with the mid-span dividing in half as two lifting elements. Structurally the bridge is designed and configured as a simple bascule, with a flat deck and two hydraulically operated lifting sections.

“There are no other structures in the vicinity, so being a low level bridge it blends into the landscape,” explains Ramboll Design Project Manager Steve Thompson. “However, drama unfolds when it opens at mid-span to reveal its elegant yet simple maritime shape.” 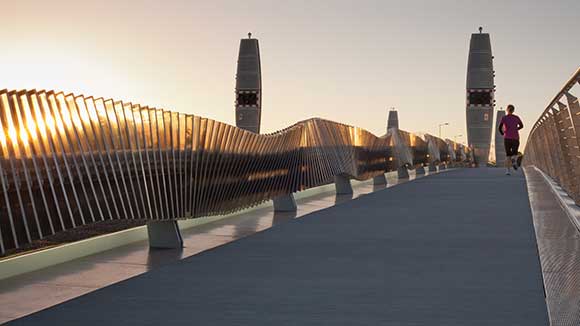 As well as designing a landmark opening bridge, materials had to be selected to maximize durability and minimise maintenance requirements throughout the life of the structure. The main deck of the approaches comprises a reinforced concrete deck slab on steel box girders, for the footways the decking is lightweight aluminium, supported on steel cantilevers.

According to Mr Thompson steel was the only option for this project as the bridge needed to be a lightweight structure that could open at least 15 times a day. A low level bridge, which mirrored the height of the quayside, was another important design criterion best achieved with steel.

The quaysides on both banks of the harbour are old structures and in places in an uncertain condition. Building a lightweight bridge, and constructing it in sections that were floated into position using the tidal movements, avoided time-consuming and costly surveys and possible strengthening works to the quayside. 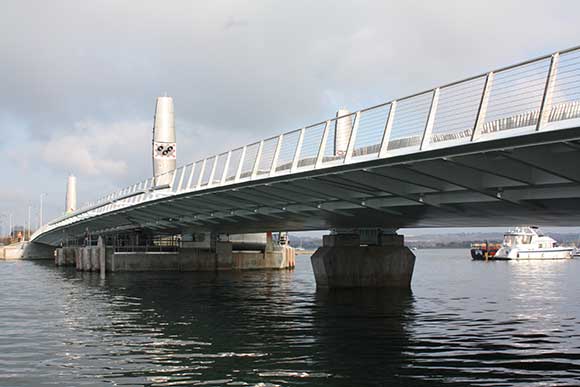 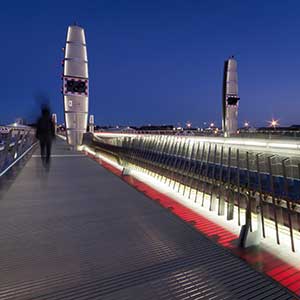 The steel sections for the bridge were fabricated at Cleveland Bridge’s Darlington facility and transported by road to Poole. The company initially assembled the first three spans of the bridge and positioned them during July of 2011.

“We had to keep the harbour open to maritime traffic at all times,” says Cleveland Bridge Project Manager Ben Binden. “So working from the western bank we first erected three spans, which included the two lifting segments for the central span. Once the hydraulic lifting gear was installed and commissioned we then erected the final two spans.”

Once each span had been fully welded and painted they were ready to be positioned.

Each completed span was loaded onto a self-propelled mobile transporter (SPMT) which then carried it the short distance down to the water’s edge and onto a flat-deck barge.

Once the barge was in the bay, tugs helped nudge the barge into position so the span was positionally aligned with its final bearings.

However, before the final positioning could take place the construction team had to wait for the correct tide. “Each span was taken onto a barge via an access ramp from our assembly point,” explains Mr Binden. “The barge then had to wait for high tide before moving the span into a position above and between its supports.” 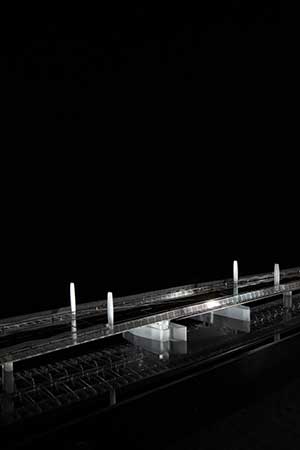 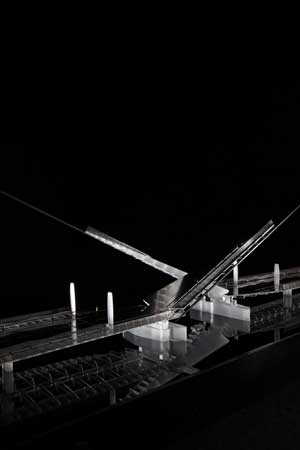 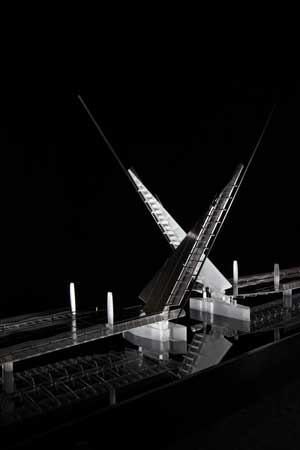 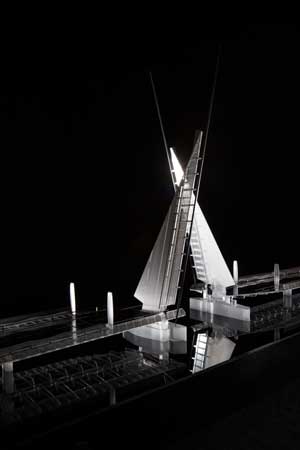 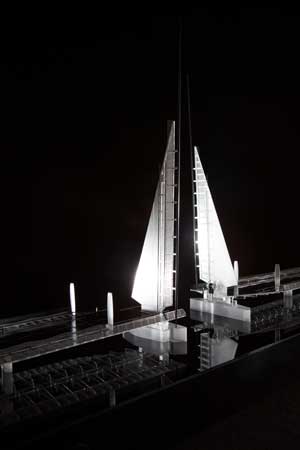 All photos except * :  Dave Morris – Spiers+Major