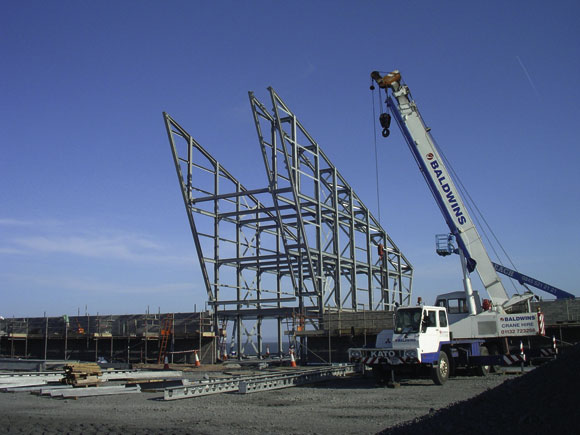 An educational facility at a South Wales power station is making use of a number of sustainable features including a steel frame.

An example of sustainability in construction, and a destination for children and adults to learn about energy’s environmental impact is under construction in South Wales. Known as the Aberthaw Centre for Energy and Education, it will open later this year and provide an important new resource for local schools and community groups.

Affording views over the adjacent Bristol Channel, the completed Centre’s viewing gallery will also allow visitors clear views into the power station to observe how it is minimising the impact of electricity generation on the environment.

“We have always encouraged educational visits to the power station and we believe this centre will improve the quality of those visits,” says Aberthaw Power Station Manager Phil Allen. 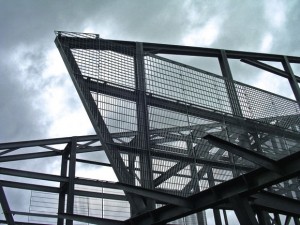 The fin is both architectural and structurally integral to the project

The initial design for the Centre was based around a concrete framed structure with three-storey high fins, however after some value engineering a smaller single storey building was decided on.

“The design needed to keep an industrial feel because of its location – so much of the steelwork is exposed – while we also wanted to reduce costs,” says Tobias Stiel, Mott MacDonald Project Designer. “Steel allowed us to achieve these aims and offered a quicker construction programme.”

Steelwork for the structure is based around a 15m tall fin; an architectural feature as well as an area to house energy saving heat pumps. The roof of the fin also accommodates a viewing gallery, accessed via a 9.5m long footbridge from an adjacent embankment.

Either side of the fin the structure extends in two directions, 30m for the west wing and 24m for the east wing. The west wing will house large classrooms, while the smaller east wing will contain a training room and an office. Taking advantage of the Centre’s coastal location, the south elevations of both wings will be fully glazed, opening up the structure to sea views.

Structurally imposing and central to the project, the fin is structurally integral to the scheme, as the building derives much of its stability from this architectural feature.

The fin is actually formed from two fins, positioned approximately 5.8m apart and tied together via moment connections. One fin is a double fin, 1.25m wide and braced together, while the other connected fin, which forms the overall fin structure, is a single steel structure.

According to Mr Stiel some of the design challenges associated with the project, and especially the fins, included the control of high uplift forces at the base of the double fin, controlling deflection of the single fin, and designing a visually acceptable connection which would remain exposed. 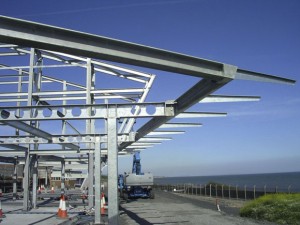 The Centre overlooks both the power station and the Bristol Channel

For steelwork contractor EvadX, the double fin was the first part of the structure to be erected.

“This was a tricky procedure as the shape of the fin means it naturally wants to topple over,” says Andrew Roberts, EvadX Project Manager. “To stop this every member had to be braced back to the adjacent member.”

Aside from the steel frame, which has a number of inherent sustainable attributes, the project is awash with environmentally friendly features. These include using by-products from the power station in the construction programme. Pulverised fuel ash has been used for foundations and furnace bottom ash will be used to construct the centre’s car park.

Once constructed the building will be insulated with material made from recycled glass bottles; heated by the pumps in the fin and cooled by ducts on the roof designed to catch the wind, while rainwater will be collected for use in the toilets.

Summing up, Mr Stiel says the design concept is energy and environment. “The Centre offers views of the sea, while the gallery on the fin affords unobstructed views of the power station’s chimney, in this way we have achieved the concept.”

Aberthaw is a coal-fired power station and began full operation in 1971. It is located to the west of Cardiff, in the Vale of Glamorgan, on the north bank of the Bristol Channel.

Aberthaw can generate 1,500MW of electricity for the National Grid System, and this is estimated to be enough to meet the needs of some 1.5M people –  equivalent to the total population of five cities the size of Cardiff.

The power station was designed to burn semi-anthracitic, low volatile coal. A high percentage of this coal is locally sourced and transported to the site by rail.

As part of its commitment to investing in lower carbon technologies Aberthaw has invested £9.5M to enable the co-firing of carbon neutral biomass fuels such as sawdust, palm kernel expeller and wood chips in 55MW of existing generating plant replacing some of the coal.