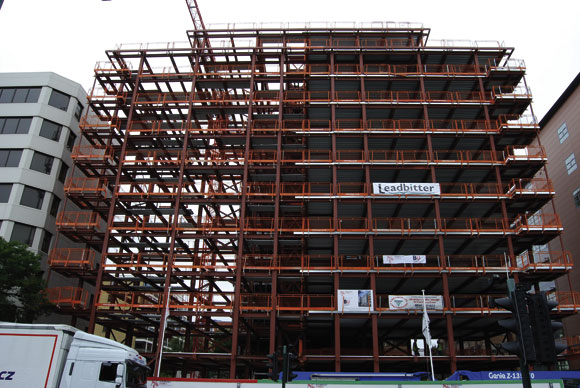 The building is now one of the tallest structures in Bournemouth

An 11-storey steel framed student accommodation block has already become a well known structure in a town not previously renowned for its high rise buildings. Martin Cooper reports on how the entire construction programme has benefited by using steel.

Situated on a rise along Holdenhurst Road, a stone’s throw from Bournemouth railway station, a new 11-storey student accommodation block is now one of the most visible sites in the town and set to become a first class purpose built building for students attending the local university.

The steel framed structure is being undertaken by Leadbitter on a design and build basis, and is due to be completed for the new academic year in September 2009.

Commenting on the project, Dave Cook, Leadbitter’s Regional Director, says: “This is a significant development in the heart of the town and will provide modern facilities for hundreds of students.”

The brownfield site has been used as a car park in recent times, and ground conditions are generally river terrace gravels and sand. These are typical conditions for this coastal area and shallow pad and strip foundations were considered the most appropriate for the conditions. 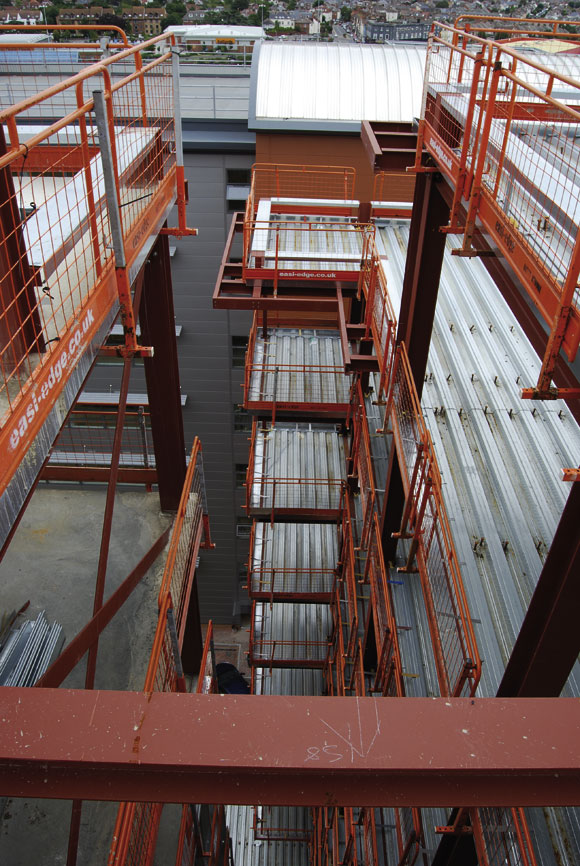 Easi-edge protection was installed by ACL on all floors 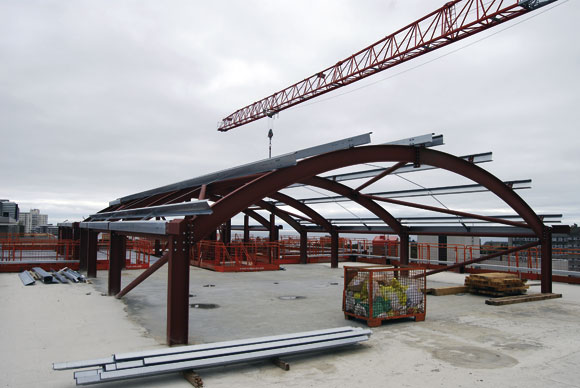 Roof top plant will be housed beneath a steel canopy structure 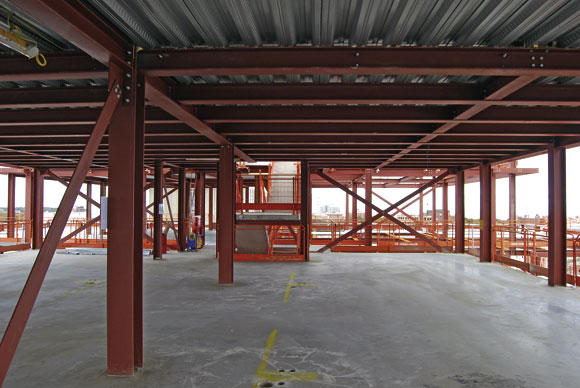 Bracing for stability is located in corridors and within lift shafts

The building is T-shaped in plan and consists of ten storeys of student accommodation, with 40 en-suite rooms per floor. One wing (the top of the T), which fronts Holdenhurst Road, has shops at ground floor level and the structure steps back at first floor level. Car parking is provided under the rear wing directly behind the retail zone.

“We had a 26 week programme and completed the steelwork in just 20 weeks,” explains Jason Berry, ACL’s Senior Site Manager. “We will come back in April to erect an entrance canopy, but apart from this all the erection work was completed swiftly even though we lost a few days this summer due to the unseasonably windy weather.”

Simon Hollis, Site Agent for Leadbitter, explains the job has had to contend with all usual problems associated with an urban project, such as space and access. “The site is very tight and so all steel was erected with our on-site tower crane and cherrypickers working at their 35m reach capacity.

Ordinarily on a job of this size – the structure is 32m tall – a mobile crane would have been employed to do the majority of the lifting. However, as Mr Hollis explains: “As the job progressed there just wasn’t the room for a mobile crane and standing it in the road wasn’t an option.”

Prior to the steelwork programme beginning, Leadbitter had installed piles and prepared the ground by pouring a concrete slab at the front of the site and tarmacing a large section where the covered car park will be located. This provided ACL with the required hard and flat surface needed to safely operate such a large cherrypicker.

Predominantly the steelwork consists of 406 x 178 beams and 356 and 368 columns, with perimeter columns generally 305 members. Bracing for stability is located within the structure’s lift shafts and along corridor walls.

“These were the only areas suitable for bracing,” explains David Harrison, ASK Ward Technical Director. “All the elevations have windows and internal bracing was the only solution.”

ACL supplied, fabricated and erected all steelwork, and columns were spliced at every other floor, for ease of handling. Any longer steel sections would have been difficult to unload on the aforementioned tight site.

Once the main stair tower was up, ACL lifted in the precast stairs which then allowed easy access to the project for the deckers and other follow on trades. Easi-edge protection was also installed along with the steelwork, which also speeds up access and any safety issues that may arise for other trades.

Each level above the ground floor retail area consists of two bays separated by a main corridor down the main I-section of the T-shape, and likewise along the front elevation.

ACL then erected the top section of the T-shape, which fronts Holdenhurst Road. “We used the tower crane in conjunction with a cherrypicker for the majority of the job,” explains Mr Berry. “However, as the final wing was erected, we were running out of space, not just for laying down steel but also for positioning our MEWP.”

ACL generally erected a load every two days, but as the job progressed and because of the lack of space, steel deliveries were eventually reduced from 20t loads to 10t loads.

“We generally had use of the tower crane all day, but the main issue for steelwork was the lack of lay down space, particularly towards the end of the programme,” adds Mr Berry.

During February and once the cladding has been completed, ACL will return to site to erect the entrance canopy. This area is currently Leadbitter’s access point to the site and so this section of the steelwork has had to be delayed.