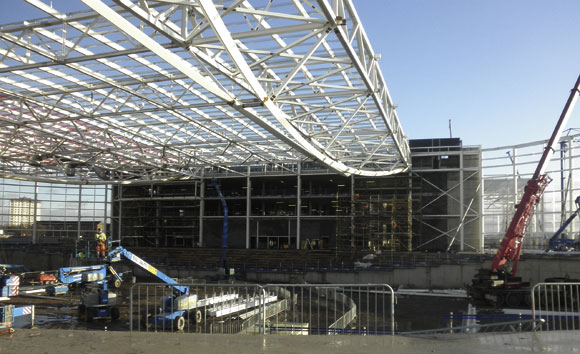 Brought to site piece-small, the trusses were assembled on site and then lifted into place. This was then followed by a similar procedure whereby the curved tendons were attached

Steelwork has played an integral role in the construction of one of the most important venues to be used during the 2014 Glasgow Commonwealth Games.

The Commonwealth Games are coming to Glasgow in 2014, and in preparation for this momentous event a number of projects are underway including the construction of the National Indoor Sports Arena (NISA) and Sir Chris Hoy Velodrome.

The venue will host two events – badminton and cycling – at the Games, and will on completion be one of the biggest indoor sports facilities of its type in Europe.

Located on a 10.5 hectare site in the east end of Glasgow, adjacent to Celtic Park and the soon to be built Commonwealth Games Athletes’ Village, the venue will act as a catalyst for regeneration and growth in this part of Scotland’s largest city.

The indoor arena (with a footprint of 92.4m × 110.7m) will host Badminton events during the Games, and will have 5,000 spectator seats when set-up for sporting competitions. Ordinarily the venue will be used for indoor athletics, as it will include a 200m six lane track, warm-up facilities and areas for field events. Adjoining the arena there is a sports hall annex, housing basketball courts, and this measures 35m × 92m. 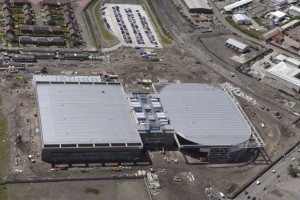 The velodrome (90.2m ×116.4m) has been designed by Ralph Schuermann, designer of the Beijing Olympics velodrome. There will be a permanent capacity for 2,000 seated and 500 standing spectators viewing the 250m cycle track, which can be increased to 4,000 seats during the Games.

Essentially the facility is split into two halves, with the steel frames of the velodrome and indoor sports arena both structurally independent and linked together by a concrete framed hub. This is a four storey element which contains among other things the main entrance area and circulation routes, changing rooms, offices and a cafe. On top of the hub their is a two storey plant area (see below).

Steelwork for the project has been undertaken by Watson Steel Structures, and it has fabricated and erected 3,250t of steel to form primary frameworks for the two structures.

“In addition to this permanent steelwork a further 90t of enabling steelwork has been designed, fabricated and installed to support and stabilise the structures during their partial stages of completion,” explains Watson Steel Project Manager Peter Riley.

Watson Steel initially received drawings of the main frame steelwork from Sir Robert McAlpine in April 2010 and then undertook to have the first 1,450t of painted steelwork for the arena delivered to site 18 weeks later in early August. This was followed quickly, at the end of the month, by the first 1,550t of steel for the velodrome, and then finally the 250t of steel for the annex arrived on site in November.

Both main structures are alike in form, with a large column free space at the centre, so consequently they had similar erection programmes. As the hub was one of the first phases of the project to be built, it offered some stability to the steelwork as it was erected, however temporary works and some ingenious engineering were still required to erect both structures.

The most interesting element of the steelwork, and one that provides the principal strength of both roof structures, are two pairs of unusual primary trusses. Each is formed from a 10m wide × 3.4m deep × 93m long fully braced box girder, manufactured from conventional I-sections. 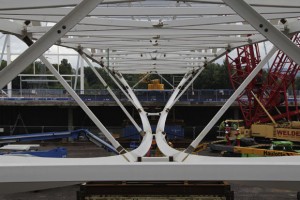 However, these trusses which will be left exposed – as will all of the roof steelwork within the two arenas – have an added aesthetic element, a pair of underslung curved tension tendons, which further contribute to the strength of the truss, and form a compound girder which is 9.4m deep at its mid-span.

Designing a truss of this size is one thing, bringing it to site is quite another matter. Watson had to identify a strategy which enabled each of the primary trusses, with their curved tendons, to be delivered to site in transportable lengths and then quickly assembled and erected such that they were self supporting over the entire 93m span.

In order to achieve this Watson developed a bespoke bolted connection at the four intersections of the curved tendons. It was designed to resist the tensions in the curvature of the tendons after initial installation, and also to provide access to fully weld the connections at these intersections after installation.

Each of the curved tendons were delivered to site in eight sections, carefully assembled in to their finished shape on a set of containers and temporary frames, and then fully welded into full length 77m-long sections. The four main box girders were meanwhile assembled on site from a number of pieces and formed into two halves while supported on stillages.

Once assembly and initial welding of the curved tendons was completed the two box girder halves were lifted up jointed at mid-span. This was achieved by using two 400t capacity crawler cranes, each rigged with 120t of superlift. The curved tendons were then attached to the underside of the box girders via bespoke temporary connections, fully bolted and diagonal spacer bracings installed.

On completion, each of the trusses was lifted into its final position and released from the cranes, after which the process of fully welding the four remaining tendon connections was completed.

In both the Arena and Velodrome the two primary trusses and their supporting columns, which are located at third points within the structures, were the first roof steelwork sections to be erected. Once up they allowed the secondary trusses, which span in the opposite direction, to be installed along with the remainder of the main frame.

Construction work is expected to be completed on the project by early next year and the complex will open towards the end of 2012.

Galvanizing and colour brought to site

Sitting atop the facility’s central hub is a two-level rooftop plant area, and as this 120t steel framework is exposed to the elements, Highland Galvanizers & Colour Coaters were contracted to galvanize this part of the project.

Paul McCafferty, Sales Director of Highland, said: “The Velodrome will be an iconic structure in Glasgow and it’s tremendously gratifying to be involved in such a high profile project.”

The rooftop is not the only area Highland has been involved with, as the company also specialises in colour coating and consequently it will be bringing zest to the complex. The company will be colour coating all of the external steel bollards and cycle racks after being appointed by project landscape architects Scott Wilson.