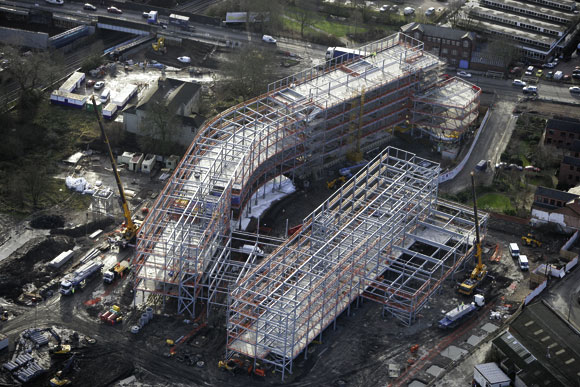 A new steel framed college campus lies at the heart of a multi-million pound regeneration of Walsall, a scheme set to transform the West Midlands borough.

The Walsall First project is a £750M public and private sector investment regeneration scheme which aims to deliver more than 5,000 jobs and 1,600 new homes for the West Midlands borough over the next 10 to 15 years.

At the centre of the scheme and the first project to get underway is the new Business and Learning campus for Walsall College. This campus has been designed to play a pivotal role in upgrading the skill base of local people and will feature highly equipped, specialised academies as Walsall seeks to move its economy firmly into the 21st Century.

Conder’s Managing Director Jason Hensman, explains: “The main 145m long, curved steel, main college building will provide 4,800m² of space on each of its four levels. It has a central glass-fronted atrium, connecting the two four-level wings, and accommodates 300m² of flexible learning space above the main entrance.”

The atrium rises to a height of 21m, and its 22m wide glass screen, forms the main hub and central focus of the college.

“New students arriving in September 2009 will be welcomed with reception and student services as well as a top-class refectory all on ground level,” adds Mr Hensman.

The two separate wings forming the campus are connected across the atrium by six pre-cambered, spliced Westok cellform beams – the largest being 27m long and weighing 7.3t – which support the curved roof structure. 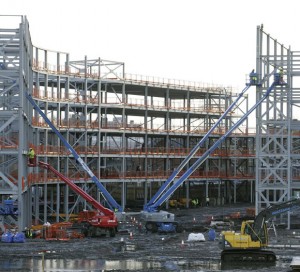 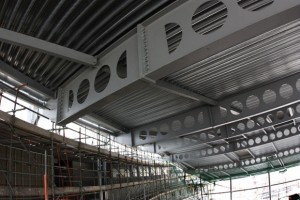 On the ends of the beams at the curved main building, six fixed bracket joints with 60mm round pins were used. At the opposing end of five of the rafters, the predicted expansion movement is achieved using 60mm square sliding pins. When the building is completed, these intricate movement joints will be hidden by a proposed suspended ceiling on level five and from the fourth floor.

The curved atrium roof extends beyond the glass screen and Conder designed 12 hidden connections for the exposed steelwork, using 200mm x 200mm box sections with cut away  access hatches, unseen from below.

Highly compact connections were achieved with end plates on each tube, plus fins and angled cleats welded at Conder’s yard, to the 16.25m long, 330mm diameter CHS angled columns, which slope at 80 degrees from their ground bases to the roof.

Conder’s steelwork erection programme started in October last year and was aided by the fact that all groundworks had already been completed. The brownfield site had been levelled and piled in preparation for the steelwork to begin.

Conder used just one mobile crane for its entire erection programme which was primarily completed by early February this year. The company divided the project into five zones and erected steelwork in zones one and three first. These areas are the tips of the structure’s two wings, and once complete Conder then linked them together by erecting the atrium zones.

For zones one and two of the main building, Conder undertook special design and fabrication of the floor beams – typically 300mm x 200mm RHS members – and soffits adjacent to the precast flooring units. The flat soffits provide natural ventilation, avoiding the use of air conditioning and heating equipment, with the floor slab acting as an effective heat sink.

On each beam, under every connection and soffit, 450mm wide flange plates, with full 8mm welds, were added so that each beam appears continuous through every column position.

“The 450mm wide plates also provide advantages for the connections on the box sections,” explains Kevin Meers, Conder’s Contract Manager. “The sections are too narrow for the end plate connections, with four bolts located within the section and four externally, but hidden from view above the flange.”

The final zone to be completed was the automotive workshop which is an independent one-storey structure situated adjacent to the main college building. The building measures approximately 60m x 40m and required 60t of structural steel beams and columns.

Structural stability throughout the project is provided by bracing located in stairwell and lift cores. These were the only locations suitable for bracing as the main elevations feature windows and doors along their entire length.

Commenting on this prestigious project, Shepherd Construction’s Site Manager Dave Critchlow, says this project couldn’t have been designed in anything other than steel.

“There are so many curves and intricate details that steel was the only solution,” he adds.

Another aspect of the design which favoured the choice of steel was the fact that beneath the site there is a myriad of old limestone workings. These tunnels have been largely located and stabilised from above, but consequently the design did require the lightest structural frame possible, and this meant steel was chosen.

Walsall College’s new campus is scheduled to open for the 2009 autumn term. 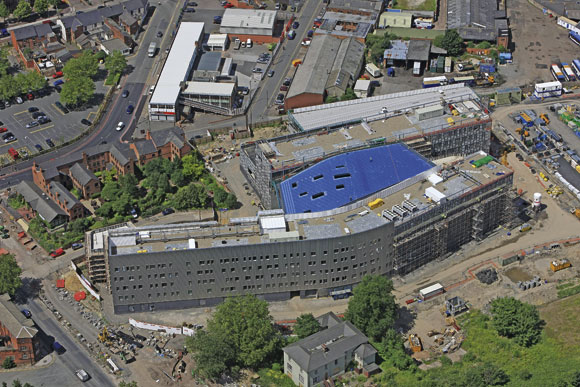