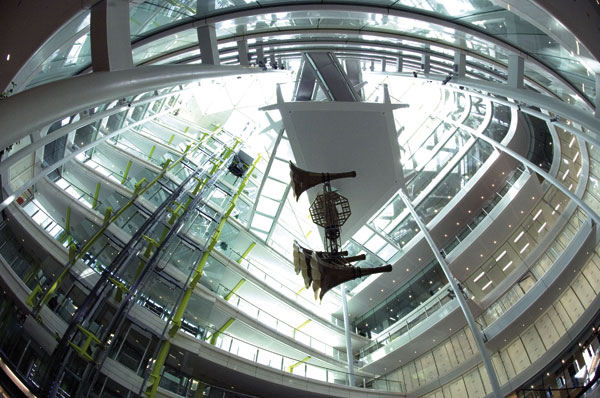 A new eight-storey steel framed headquarters was constructed for Unilever within a retained Grade II listed façade built in 1931.

Inside a listed and retained facade a new eight-storey office building and an adjacent five-storey gatehouse structure was constructed with a combination of reinforced concrete cores and steelwork bracing.

The main focus of the project is the main building’s central atrium that has four levels of suspended structures that are known as ‘flying carpets’. These platforms are supported by a series of spiralling rods hanging from a diagrid roof system. They also provide a communal meeting place for the building’s workers and are illuminated by spotlights attached to the CHS support columns. 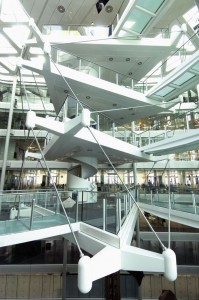 Each of the four ‘flying carpets’ are a different shape and were prefabricated in William Hare’s workshops and transported to site in two pieces and then welded together.

“Due to the complexity of the support Duplex rods their design necessitated precise calculations to determine the tension in each in order to achieve exact positioning of platforms,” says Nick Day, William Hare Project Manager.

The ‘flying carpets’ are accessed by a series of opaque glass walkways that are formed from box sections and fabricated T-sections that taper into the adjacent floors. These were also prefabricated and transported and erected in single lifts. In addition to the usual benefits of steel construction, the concept of preassembled units helped reduce the overall programme duration to achieve effective completion in 25 weeks.

Temporary works were necessary to construct the atrium steelwork and to minimise disruption at ground level. An innovative propping platform was first assembled at level 5 from which temporary props and access platforms were sprung.

Other interesting elements of the project include a series of lozenge columns, which were formed by the welding of two continuous side plates between two CHS sections. These members support architectural lift guide arms, which were fabricated from plate and hollow sections.

Fire protection to the new steelwork frame above ground floor was provided by shop applied intumescent paint with a site applied topcoat on the mainly visible members. Applying the fire protection off site greatly reduced the build time and ensured good quality and a minimum life to the first maintenance period of up to 12 years.

Fabsec cellular beams were specified to integrate the services within the structural floor depth. The latest Fabsec software, Fbeam, was used to optimise the beam mass with the most efficient paint thickness, and this was one of the many value engineering exercises incorporated by the design team.

The building is an excellent example of sustainable project delivery that surpasses BCO specification. The project also achieved a BREEAM ‘Excellent’ rating and carbon emissions were reduced by 25%.