50 Years Ago: Lanchester College of Technology 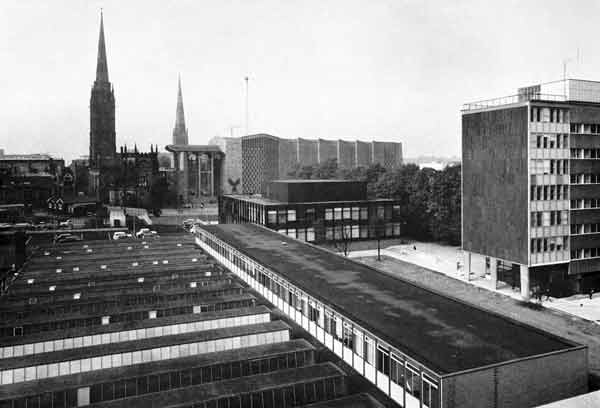 The Lanchester College of Technology, Coventry, named after F. W. Lanchester the famous local engineer and motor car designer, has considerably grown and broadened its horizons since 1958, following the increased national emphasis on advanced technical education. The College occupies an important urban position in the centre of the town close to the east side of the new Cathedral and, when completed, will constitute a major part of an interesting educational and civic precinct, which includes the Central Swimming Baths, an Art College, and Art Gallery and Museum.

The earlier building phases of the college have concentrated on providing teaching, laboratory and workshop accommodation in four buildings on the site. The last phase has been concerned with the provision of two buildings, one housing the Students’ Union and the other the administration and main lecture theatre for the College. These two buildings, lying close to the cathedral, require to be of a quiet and dignified expression but also truly representative of technology.

In order to achieve a coherence of design between the two college buildings and 80-in planning module has already been adopted elsewhere on the site and expressed as vertical steel joint mullions. These factors led to the investigation of using steelwork and precast concrete floors in the construction of the two last buildings and, when impartially considered on costs relative to other forms of construction, it was found that a steel frame offered the most economic solution.

The Students’ Union building (Block E) contains the main assembly hall of the College, the Students’ Union offices and the College dining rooms and kitchens. Structurally, the principal requirement was for a clear span hall measuring 60 ft. by 106 ft. by 22 ft. high, with car park below and dining room above on the top floor. In general the principal stanchions lie just within the external walls and the beams extend outwards to carry horizontal channels to which the 8 in. by 5½ in. steel joist mullions are fixed at 6 ft. 8 in. centres. These also serve to carry the steel glazing and pressed steel sandwich infill panels fixed to the rear flange by means of stud bolts welded on before delivery to the site.

The hall is spanned by inverted Warren girders at 20-ft. centres. The beech slat finish of the ceiling follows the contours of the underside of the trusses, thereby increasing the area of natural lighting. The mezzanine floor is suspended between the upper ground floor and the first floor to contain the lavatory facilities for the dining and common rooms.

Block F houses the administrative offices in addition to the 6,000 sq. ft. library on the ground floor and a raked lecture theatre on the first floor, rising above the roof: it seats 276 persons. In this block the steel frame is carried from internal stanchions to the external steel joist mullions, again at 6 ft. 8 in. centres, which also serve to support the steel glazing fixed in the manner described earlier. In order to avoid the problems involved in taking the external steelwork into the ground, the mullions have been stopped off just below the suspended ground floor and tied back to a perimeter beam which is situated on the plinth wall round all sides of the building.

The lecture theatre was constructed in 20-ft bays with cambered castellated beams spanning 60 ft. – the splayed shape of the auditorium being attained by building up blockwork walls within this framework. Large steel raking joists carry transverse angles for the support of permanent steel shuttering for the in-situ concrete tiering to which the seats are fixed. Externally, the steelwork was cleaned and given one coat of red lead primer, in addition to the manufacturer’s primer, and finished with two coats of oil paint.

The architect for this project was Arthur Ling, then City Architect and Planning Officer; and the consultant engineer was Granville Berry, City Engineer and Surveyor.

The ‘Sunday Times’ builds in Steel 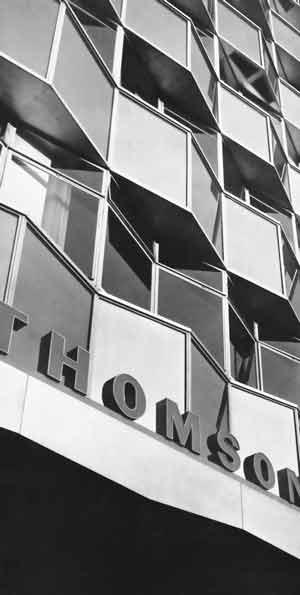