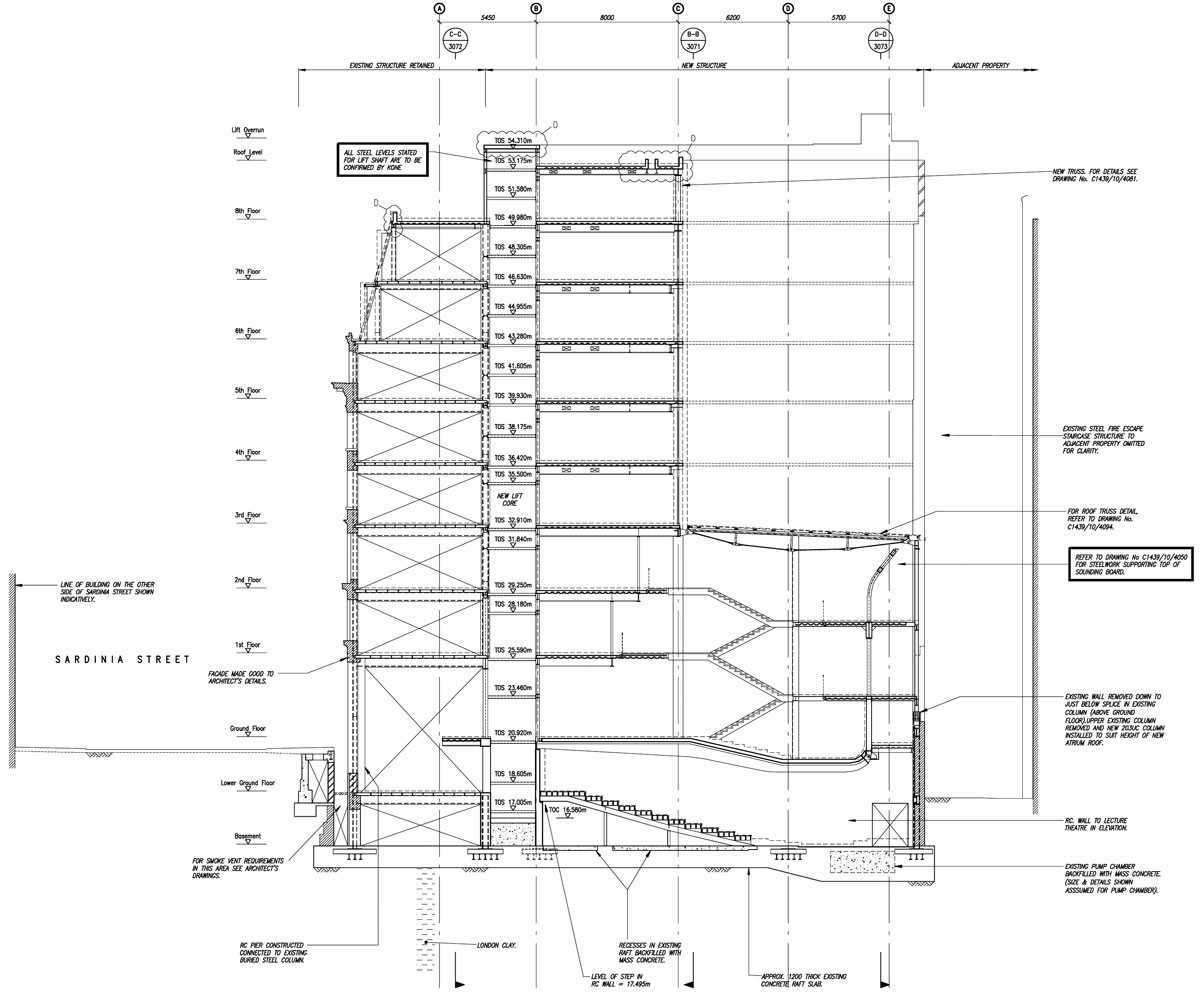 Side view of the new internal steelwork

An innovative hanging floor arrangement and modular cores, all behind a retained façade, have all helped to keep a major London academic project to schedule. Martin Cooper reports. 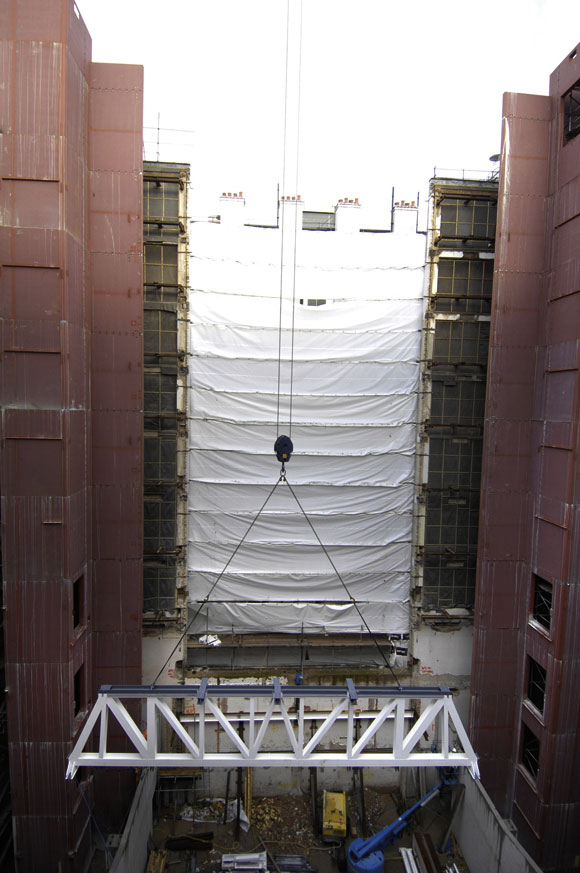 The ground level truss being lifted into place 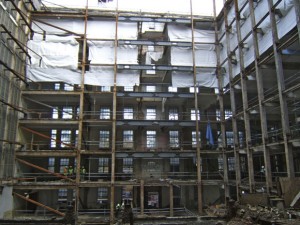 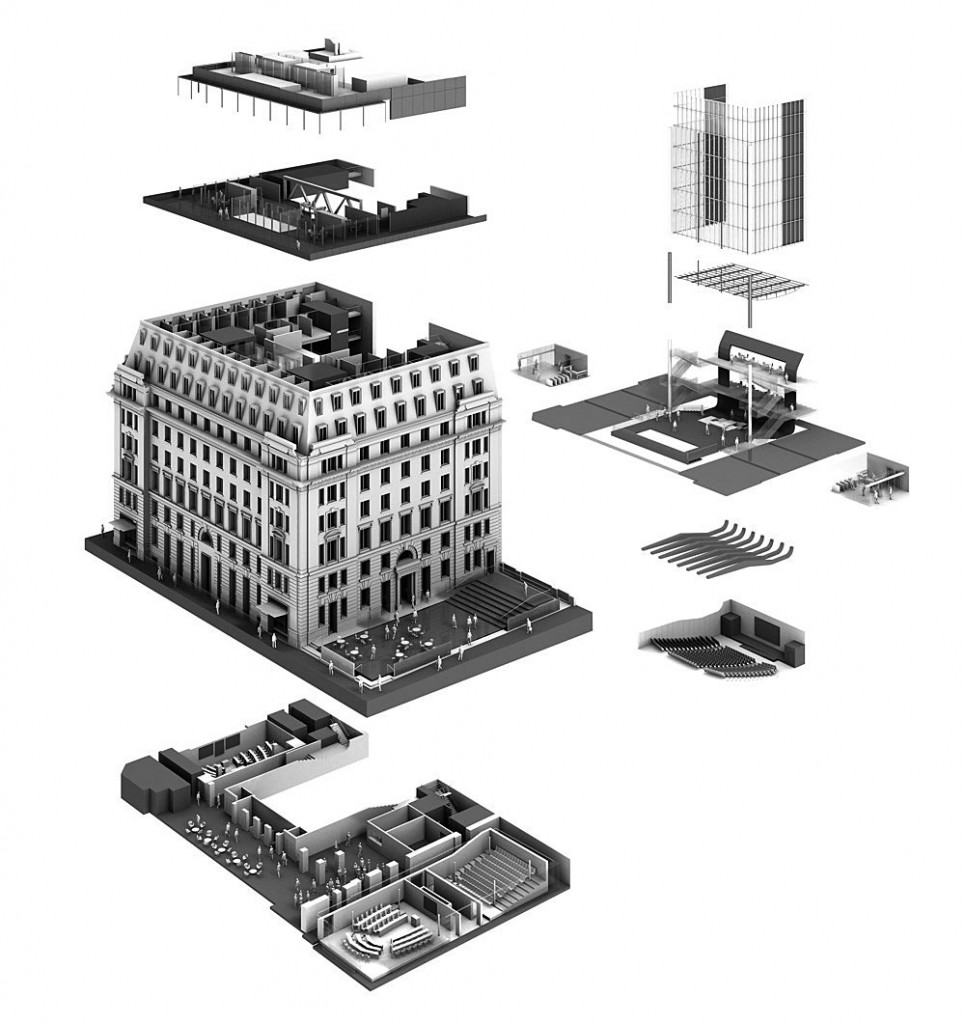 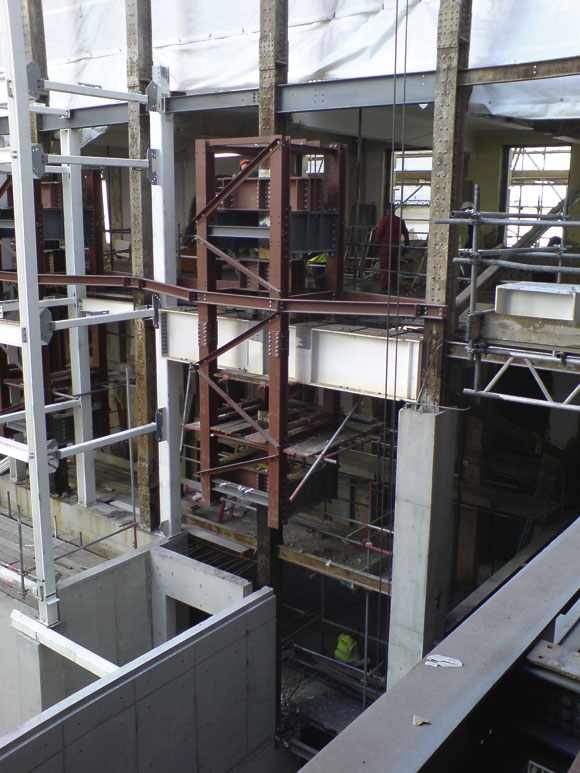 Four columns have been removed, using a by-pass frame, to create a more open-plan area

The latest central London construction project to incorporate an historic retained façade is the 12,700m² new academic building for the London School of Economics and Political Science (LSE).

Originally built in 1912 and situated between Kingsway and Lincoln’s Inn Fields, the Portland stone clad steel-framed structure has nine-storeys plus basement and is U-shaped in plan.

As well as retaining the building’s facade, the construction plans incorporate a larger floorplan, an atrium taking up some of the open area of the U-shape, a roof pavilion which will add another floor to the structure, and a revamped forecourt area.

Main contractor Osborne started its work on site in early 2006 and demolition – carried out by McGee – began in September and lasted for approximately four months.

The demolition work essentially removed all the existing floors, including the structure’s two basement levels, while retaining the facade and the external bay of floor structure around the perimeter of the building.

Retaining some of the existing floor space helped stabilise the façade during the works, but this also meant steelwork contractor Bourne Steel was needed on site from an early stage.

“As each floor was demolished we had to erect new permanent steelwork and we were basically in and out at this stage,” says Mr White. “Once demolition was over, however, our presence on site increased significantly as we then began erecting the new build elements of the job.”

Working behind a retained facade presents a number of challenges for contractors. Mr White says getting all steel members into the site had to be done by tower crane and consequently all sections were kept to a minimal length and weight.

Marrying the new steel elements to the original steelwork was another challenging aspect of the project for Bourne. “Our connections to the existing riveted steel were very labour intensive as the old plates had to be washed before being drilled,” explains Mr White.

This configuration of hanging steelwork also allows the main ground floor area and an adjacent lecture theatre at lower ground level to be clear of internal columns.

The 15t roof level transfer truss is 17.5m long and is supported on two CHS columns which extend right through the new build section of the building. These columns are 559mm diameter at the lower levels, decreasing to 508mm diameter further up the structure. At basement level these two columns are founded on new piles.

“All of the floors down to the third level are hung from the bottom cord of the truss by two steel hangers which are each made up of two 100mm x 50mm solid steel bars,” adds Mr Rooney. Further down the structure, separate SHS hangers connect to the second and first floor levels.

Bourne had to use some intricate temporary works to install the hangers. They were craned into the site in 16m lengths attached to a ‘strongback’ device which prevented any damage during transit. This device was detached from the hanger once they were in place and then used for the next section.

The new atrium measures 13m x 16m, extends upwards from the third floor level, and will incorporate a visible scenic lift. To support its glass cladding eight 13m-wide bowstring trusses will be installed. Below third level the entire footprint is used by the building, with the ground level containing a large public walk-through area above the basement theatre.

Meanwhile, to add to the flexible floor areas and create a more open plan feel, four existing columns – which are structure height – have been removed from every level. Transfer beams have been inserted above these new grid plan voids and the adjacent columns have been strengthened by concrete encasements to take the extra loading.

Another 6t steel truss has also been installed at ground level and this supports eight 19m long pre-cast concrete ribs which form part of the roof structure to the basement level lecture theatre.

All those involved in the project say the steel elements of the project have kept the job to schedule, as time is of the essence. The new LSE building is due to open for the Autumn term in 2008. 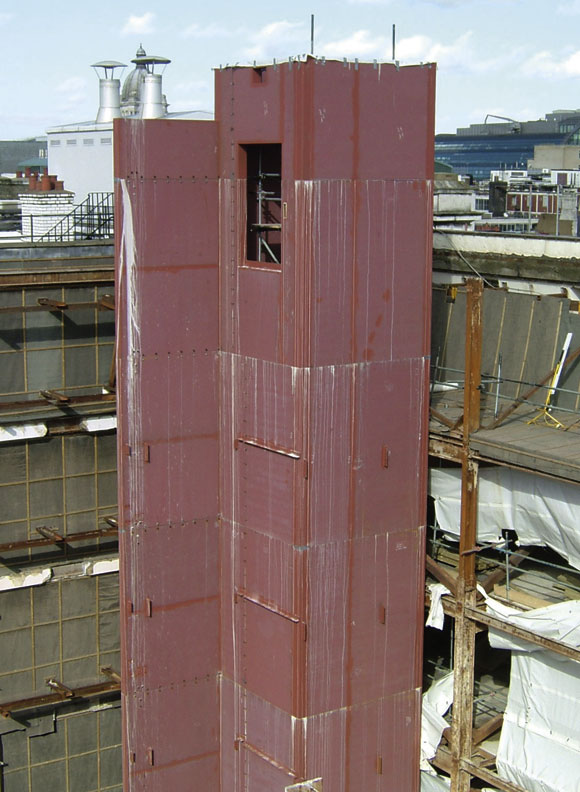 The original building layout contained two masonry staircase/lift shafts and these were dismantled by McGee during the demolition works. The initial construction plans envisaged the replacement with similar sized concrete lift cores.

Mark Makinson, Osborne’s Site Manager, explains that as McGee were contracted to install new cores they suggested the Corefast option as a quick and efficient alternative.

Corefast is an off-site, modular technique for the rapid erection of structural cores. The system makes use of Bi-Steel, which comprises two steel plates connected together by bars to form panels. When erected on site the void between the panels is filled with ready-mixed concrete to create a high performance construction.

“Ordinarily, it would have been the steelwork contractor which would have erected the steel cores, but as the specification changed from concrete at McGee’s suggestion they did the work,” says Mr Makinson.

Speed was critical for this project and both cores were erected in just over two weeks by using the Corefast modular system.

“With concrete we were looking at a 14 week programme,” comments Mr Makinson. “By using Corefast, we were able to meet the client’s ambitious programme requirements.”

Robert Fisher, Corus Bi-Steel Business Development Manager for Corefast, says the fact that McGee did the installation highlights the product’s simplicity of erection.

“The core design was ours,” explains Mr Fisher. “The modular sections were delivered to site in single storey heights and they were all bespoke units to suit the site layout.”

Each storey height was erected from two sections: one a F-shaped unit and the other a C-section. These elements, which weighed no more than 4t each, were craned into the project individually and then bolted together.

Commenting on the advantages of using the Corefast system, Mr Makinson adds, the steel units were specified in 216mm thicknesses. This is the thinnest Corus produces, but as steel is stronger than concrete a thinner core wall was installed, increasing the net internal floor area.

Mr Makinson comments that he was also impressed with the construction tolerances of the Corefast units, which helped with the speed of installation.

“Another advantage of the Corefast method was that we were able to have other trades working during the installation process, says Mr Makinson. “If we’d have gone down the reinforced concrete core route, not much else could have gone on while they were being constructed.”