The 2004 Market Share Survey confirmed the dominance of steel as the constructional framing material of first choice in the key sectors of the market, as developers and designers continued to turn away from lower-tech alternatives like concrete. Nick Barrett highlights some of the strongest market trends.

One of the most encouraging features of the 2004 Market Share Survey was that in the major growth sector of high rise residential, steel was winning market share. In a market which had grown from 1% of the total accommodation starts in 1999 to 11%, steel has seen its market share increase from 39.4% to 43.5% in a single year.

The number of steel-framed apartments has doubled since 2003, with steel frames used for over 10,000 high rise apartment units in 2004, compared with less than 5,000 units in 2003. These tend to be prestige developments, often waterfront, and the good news is that despite all the worries about the broader housing market, apartment building still looks like being on the increase – and a large proportion of new building will be multi-storey. With the competitive position regarding steel versus concrete frames unchanged by rising steel and cement prices, steel can expect to continue the recent trend of capturing market share as developers latch on to other benefits of steel – not the least important of which for the housebuilders is construction speed and being able to catch windows of market opportunity.

A number of factors have come together to create this rising demand for high rise accommodation. The house buyers’ view of high rise living seems to have undergone a sea change in the past few years. There has been a marked increase in the popularity of city centre living and as people return to towns they are demanding apartments rather than the terraced houses or tenements of the past. An increasing amount of this is being provided in multi-storey structures.

According to a survey by property consulant Savills, there are over 87 high rise blocks of over 20 storeys either under construction or planned across the UK. As well as providing around 19,000 housing units, they will give great views across cities or rivers, and they are being built with car parks, gyms and other features. These signature buildings are a far cry from the public sector high rise failures of the past, and are the most visually arresting part of the urban renaissance of the UK’s major cities.

Government policy of encouraging brownfield developments rather than building new homes in the countryside has been a factor in encouraging these inner city, high rise residential developments. Although London will be the focus of the action, hardly a major city does not have a major development or two in the pipeline.

Of those identified by Savills, 49 were in London, but almost 25% were in the North East and North West. Towers are expensive to build; according to data from cost consultants construction costs rise markedly between 20 and 40 floors. As the building’s height rises so does the need for foundation strength, and the relatively low self weight of steel helps swing the cost argument further away from concrete. 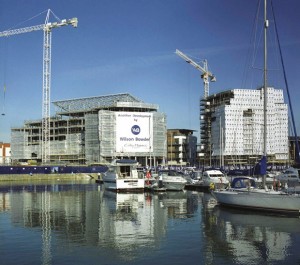 This is a market which is usually thought to depend to a crucial extent on cost. As Savills’ survey pointed out, for the tallest residential buildings of over 50 storeys a developer needs to achieve sales values in excess of £425 per sq ft, which may explain why relatively few tall residential towers have been developed in the past.

Savills says that in spite of this, many developers turn a blind eye to the finances as there is an acceptance that a signature building can offer help in promoting a large regeneration scheme. “It may not make the developer his fortune, but the marketing and awareness that it generates for the scheme as a whole, far outweighs any loss in the overall profit margin,” Savills argues. Still, we can be sure that price is still in the equation somewhere, which suits steel.

There have been misleading press reports that post-tensioned concrete slabs have doubled their volume in terms of floor area over the past two years and taken share from steel frames. But as the Construction Markets survey shows, the volume of high rise apartments has risen substantially, from 3% of the residential market in 2002 to 11% in 2004. Post-tensioned concrete volumes may well have increased in absolute numbers, but this simply masks the fact that steel frames have also gained, not only in volume but also in market share at the expense of concrete alternatives.

Trends are also running steel’s way elsewhere. What was marked in the ‘all multi storey non-residential buildings’ category was the continued lack of market interest in concrete for frames there. Steel’s market share increased to 69.2%, with in-situ concrete down to 16.8%, its lowest level since the survey began in 1980.

The concrete collapse was also marked in multi-storey offices where steel extended its dominance with a share of the market, defined by floor area, of 71.7%, while insitu concrete saw its share of offices fall to 20.9%, from 23.3% in 2003.

In the ‘other multi-storey buildings’ category, which includes retail, leisure, education and health buildings steel enjoyed a 68.2% market share with insitu concrete being used on just 15%, down from 17.5% in 2003. Load bearing masonry saw its share of these sectors rise to 11.2% from 8.4% in 2003.

Of particular note in steel framed multi-storey non-residential buildings is the continuing rise in the use of intumescent coatings for fire protection. In 1995, around 10% of steelwork in multi-storey buildings used intumescent coatings; in 2004 that figure has risen to 65%. The steel industry’s commitment to research and development into steel’s fire performance has led to an engineered approach incorporating intumescent coatings becoming the industry standard, with significantly reduced costs and improved safety. Fire performance was once regarded as steel’s Achilles Heel, but the improved understanding that has been developed through focused research is now turning it into something of an advantage, particularly when compared with in situ concrete – where designers are increasingly recognising that it is a mistake to consider concrete as inherently fire resistant.