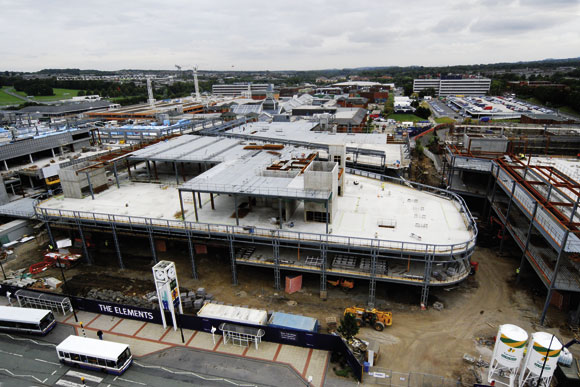 Once complete The Elements, combined with the existing Almondvale Centre, will create one of Europe’s largest indoor shopping malls.

Steelwork’s flexibility has come to the fore on a new retail development in Livingston town centre. Martin Cooper reports.

The growth in large retail developments, right across the UK, shows no sign of slowing down and one of the largest on-going schemes is The Elements, a £90M extension to the Almondvale Shopping Centre in Livingston, West Lothian.

The project will provide more than 34,000m2 of new shopping space including 30 new shops and two anchor department stores, 2,322m2 of leisure space and a winter garden.

The existing Almondvale Centre was built in two main phases, during the 1970s and 80s, and contains around 120 shops, most of which are well known high street retailers. It also includes one of the UK’s largest superstores, an ASDA, which is located at the east end of the mall.

However, according to the project’s developers, the town’s shopping population has grown by 70% since 1998 to around 150,000, and is predicted to increase further during the next few years. 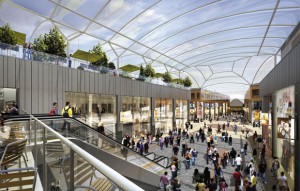 Covered by an ETFE roof, the mall will have two trading levels.

Livingston’s core catchment area is centred on West Lothian, which has the youngest population and the highest projected population growth of any local authority area in Scotland. The town is also ideally placed to attract shoppers from both Edinburgh and Glasgow.

Consequently the retail expansion is regarded as a necessary step and forms an integral element of a much larger development of Livingston’s town centre, which also includes a new multi-storey car park.

Construction work for The Elements is taking place on the site of a former Safeway store and its adjoining carparks. Once the project is completed Livingston will have one of Europe’s largest indoor shopping complexes with more than 92,000m2 of retail space.

Main contractor Miller Construction started work on site early in 2007, and began by demolishing the existing structures and clearing the site. Steelwork contractor Severfield-Reeve was then able to begin its programme in March, erecting approximately 4,000t of steel by the end of 2007.

The project features four malls which all converge at a central plaza, which will contain a large open public space and an array of restaurants overlooked by a rooftop level winter garden. Each mall will have two trading levels, a ground floor and a mezzanine level within the retail blocks. All of the malls will be covered by a transparent ETFE roof, which will allow natural daylight to penetrate into the shopping areas.

Martyn Wakefield, Site Construction Manager for Severfield-Reeve, says that one of the most challenging aspects of the project is the fact that there are six individual steel-framed structures which form the retail development.

“Each of the blocks are structurally independent and so they were all individually erected,” he says. “In many other similar malls the entire structure would be just one building.”

There is very little connection between the blocks apart from at roof level where steel trusses span the malls to support the ETFE grid roof structure. Each steel framed building has its own tolerances and setting out had to be exact to take into account the roof which sits on steel plates above each block.

“By incorporating six blocks the design will break-up an otherwise regimented streetscape, as each block will be clad with a different combination of cladding,” adds Allan Driscoll, Arup’s Project Engineer.

Where the four malls converge they form a cross and in each corner, abutting two malls, there is one of four steel framed blocks (B, C, D and E). One of the malls leads directly into the existing Almondvale centre, while another leads directly to a new entrance foyer. The other two malls lead directly into anchor department stores (Blocks A and F).

All of the steel framed blocks are two-storey high, including the Debenhams (Block A) anchor store, with the exception being Marks & Spencer (Block F) which has three levels.

Marks & Spencer were not the original tenant of Block F and once they were lined up for the tenancy the design was changed at their behest. “This block was the most time-consuming for steel erection,” explains Mr Wakefield. “We already had most of the steel for this anchor store erected when the design was altered. We had to do a lot of variation work including adding an extra floor.”

Steelwork’s inherent flexibility came to the fore during the alteration work as a number of columns had to be
moved to allow for new voids to be created as lifts and stairwells were repositioned.

“By using steel we designed a fair amount of flexibility into the structures,” adds Mr Driscoll. “We also wanted to make allowance for possible changes in tenant requirements and this made the alteration work a lot easier.” 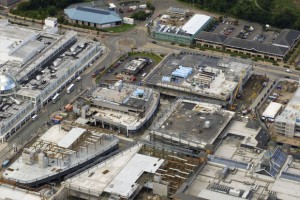 Alteration work aside, Severfield-Reeve’s steel erection work went smoothly. It is predominantly stick and beam construction on a 7.5m x 7.5m grid, with a slightly larger grid pattern for the two anchor stores.

Stability is provided for all of the structures by concrete cores, with two or three in each block. “This was the best option as there is no room – because of the glazed shopfronts – for any perimeter cross-bracing,” explains Mr Driscoll. “So all steelwork is tied back to the reinforced cores.”

Service yards for The Elements are located beneath Blocks A and F, and large 19t plate girders were needed to support the shop floors. “These were the largest steel members we had to erect,” says Mr Wakefield, before explaining that there was one other aspect of the project which was unique and impacted on all construction work.

Because of the project’s location, midway between the existing shopping centre and a designer outlet, a temporary covered pedestrian walkway, positioned in two of the malls, bisects the construction site. This allows shoppers free access between the two existing malls during construction work and effectively cuts the site into two separate entities.

This meant all deliveries had to be planned and sent to the correct half of the site, and Severfield- Reeve had two separate workforces. As the walkway had no protective crash deck, no materials, including steel, could be lifted over it and all erection was done in such a way as to avoid going over or near the walkway.

Taking everything into consideration, such as a tight timescale and accommodating all of the variation work, the team members all agree the project has gone extremely well and The Elements is due to open on time this November.