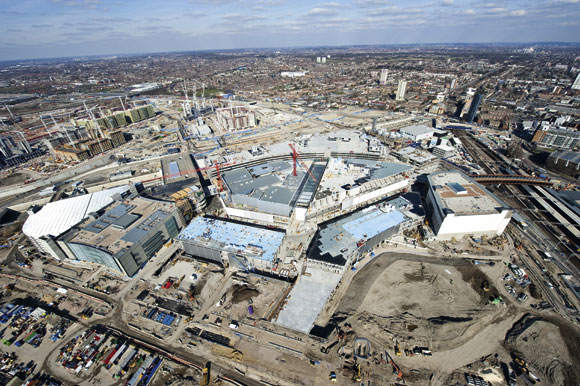 Located next to London’s Olympic Park, Europe’s largest urban shopping centre is rapidly taking shape. Martin Cooper reports from a project which will act as a gateway to the 2012 Games.

Due to open next year Europe’s largest urban shopping centre, and indeed London’s largest retail destination is currently under construction in the east of the capital on previously disused land next to Stratford station. Over the last few years developer Westfield has completely transformed a site which was a mixture of railway sidings, small industrial units and an area used to deposit more than half a million cubic metres of overburden from the construction of the Channel Tunnel Rail Link (CTRL).

Westfield Stratford City, which sits adjacent to the Olympic Park, is huge and there are some big numbers associated with it. To start with there is an overall steel tonnage which is close to 43,000t and this total could even increase. Approximately 380,000m² of metal decking has been installed in a project which will offer more than 175,000m² of retail and leisure space including more than 300 shops.

Add to this the fact that Westfield estimates the development has a 4.1 million catchment population, equating to some £3.24bn weighted spend, what we have here is a massive project, both construction wise and economically. One which together with the Olympic Park covers more than 700 acres and is consequently one of the largest urban regeneration projects ever undertaken in the UK. 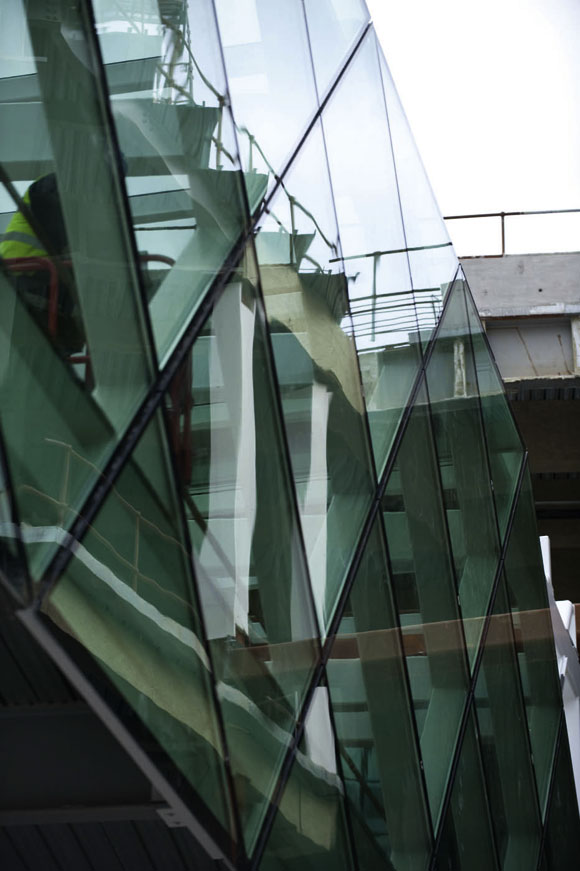 The link bridge to the Marks & Spencer anchor store 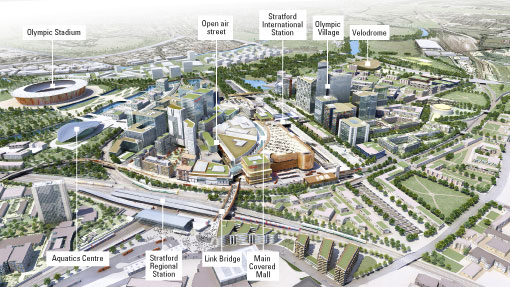 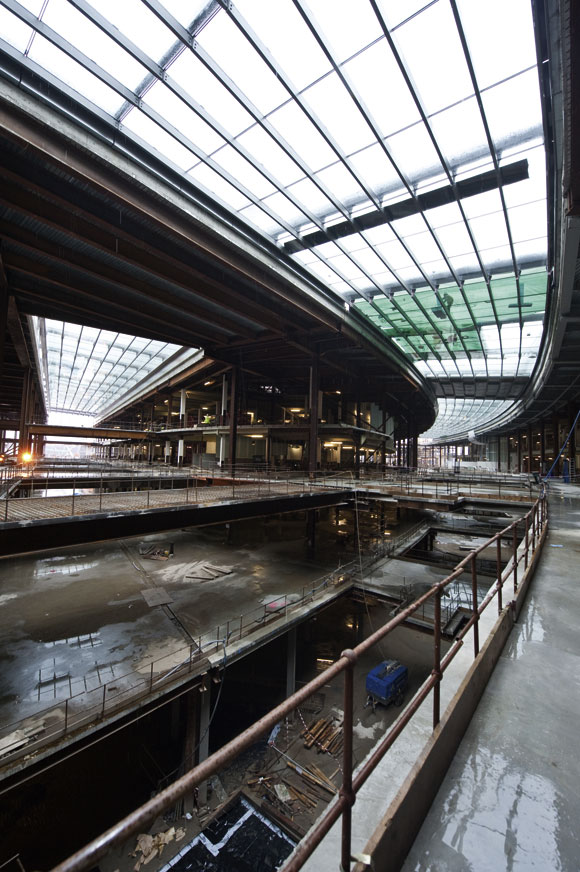 The main covered mall which links the two anchor stores

Although the development was on the drawing board prior to London’s successful 2012 Olympic bid, it is intrinsically linked to the event. Stratford City will act as the gateway to the Olympic Park, as visitors arriving at either Stratford International Station or the Regional Station will have to walk through the shopping centre.

Preliminary works on site began in mid-2006 and were soon followed by a three-month earthmoving programme. The land had been raised in places by as much as 10m due to the rubble deposited from the CTRL, and apart from a few areas that were contaminated, no material was taken off site. Instead Westfield created a number of plateaus before the entire site was piled using a combination of precast piles, continuous flight auger piles and sheet piles to create the basement walls.

Above ground the project is a steel-framed construction project, as the material lends itself to a “flexible and fast construction programme” according to Keith Whitmore, Westfield’s Director of Design & Construction.

Speed of construction is vital to the majority of projects, but flexibility is equally important to Westfield. “With steel you can change things quickly and we have to be flexible around our clients demands,” he says.

By using steel as the framing material much of the development has been ‘future proofed’ for further expansion. This decision was made early in the design process and includes all of the main buildings with the exception of the anchor blocks.

Westfield recently announced an extension to one which initially consisted of offices and retail over four levels, but will now be topped with an extra seven floors of commercial office space.

“The steelwork was designed to take extra loading from possible additional floors. That’s another one of the advantages of designing with steel, it’s flexible and you can add floors much quicker than with other materials,” continues Mr Whitmore.

This philosophy has also been applied to the project’s main car park. At present the plan is for 5,000 dedicated shopper car parking spaces across three separate locations, however the main car park has also been designed for possible future expansion. Here the main steel columns have been installed 6m below the basement slab, allowing room for a future excavation to create another subterranean level.

“We’ve put asphalt down on the lower level of this car park, instead of concrete as it’s easier to dig up,” explains Mr Whitmore.

Overall the development has eight main retail blocks and is anchored by a 22,296m² John Lewis store which sits above a 2,972m² Waitrose supermarket, and a 18,580m² Marks & Spencer. A state-of-the-art 12 screen Vue cinema is also under construction, while a 267-bed, 11-storey Premier Inn will be positioned conveniently close to the International Station. ‘Future proofing’ comes to the fore again, as there are plans to enlarge one of the retail blocks and add another hotel to sit on top.

The centrepiece of the project is a 400m long curved three level glazed mall which links the two anchor store buildings. Another route between the two major stores is uncovered and this passageway will provide direct access from Stratford Station to the Olympic Park.

Steelwork erection has been undertaken by Severfield-Reeve and its Contracts Manager Steve Pinkney says the most challenging aspect of the project has been the location. “The site is surrounded by railway lines on three sides, which has meant space is at a premium. As the project is erected we’ve used up the available storage space.”

During the peak of the steel erection programme early in 2009, more than 800t was being erected a week, which required 40 to 50 weekly truck deliveries to keep the site fed. Severfield at this stage had seven erection gangs working on seven separate fronts.

“Although we are erecting a lot of steel, it is mostly repetitive as the retail zones are all based around a regular 7.5m grid and the car parks are 16m grids,” says Mr Pinkney.

The exception to the regular grid pattern is the cinema where a series of 32m-long trusses form the required column free open plan area.

Westfield Stratford City is scheduled to open in 2011, a full year before the Olympics kick-off. This gives it plenty of time to get used to the thousands of expected shoppers who will visit the centre, although the numbers will significantly increase during the Games.

To this end, Westfield has plans in place to remove street furniture and outdoor planters from the main malls while the Olympics are on, to make the avenues wider and allow greater numbers of people unimpeded access through the site. 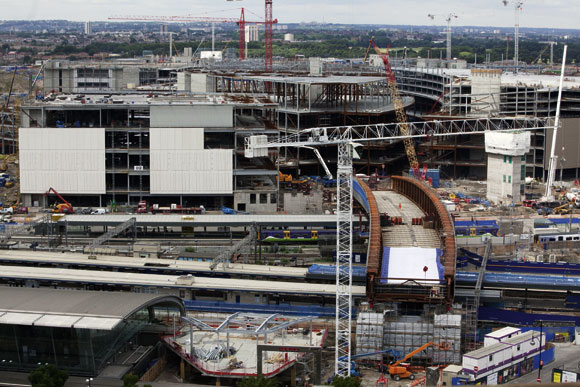 Westfield’s development will be linked to the existing Stratford town centre via the 128m long x 14m wide Town Centre Link Bridge which spans 11 railway lines at Stratford Station. This steel composite structure weighing 1,600t, was assembled by Watson Steel Structures into three separate sections which were then progressively pushed out on three occasions.

The first two pushes involved night time possessions of the ‘live’ rails, and these were so successful that the final push was actually done during the day with no disruption to rail services or passengers.