Council in the frame 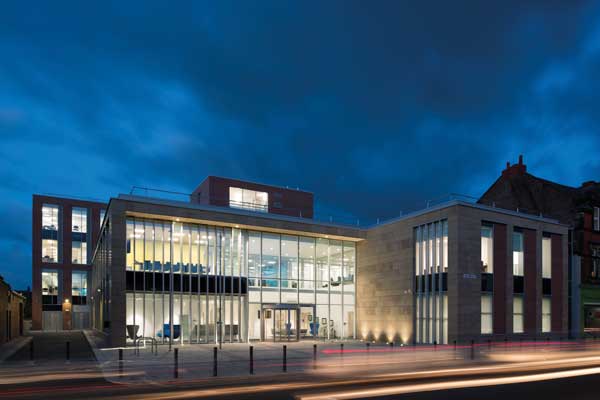 A steel-framed solution has been chosen for Cumbria County Council’s new offices in Carlisle.

By moving the majority of its staff into the new premises, the Council is able to sell more than 20 older offices throughout the city, a move which will save it around £1M each year.

Located on the historic Botchergate, the headquarters building features 450 workstations and accommodates around 700 staff, with hot desking, mobile working and modern technologies helping to further slash overheads and cut the council’s carbon output in half – from 1,546t to 826t.

Eric Wright Construction Managing Director John Wilson says: “As a business, and working in partnership with our design team, we’ve extensive experience in creating high-profile, bespoke office accommodation for clients across the UK, and we believe we have delivered such a project that will help Cumbria County Council achieve its commitments to ongoing overhead reductions and cost savings.”

Working to a 62-week programme Eric Wright Construction initially had to prepare the site by demolishing some shops and houses and then installing pad foundations in readiness for the steel frame.

An archeological dig was also undertaken during the early part of the programme. Medieval and Roman artifacts were unearthed and some of these will be exhibited within the main entrance of the new Council offices. 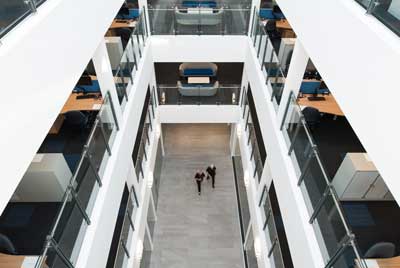 Offices are arranged around a large central atrium 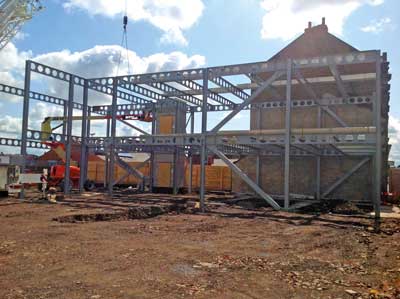 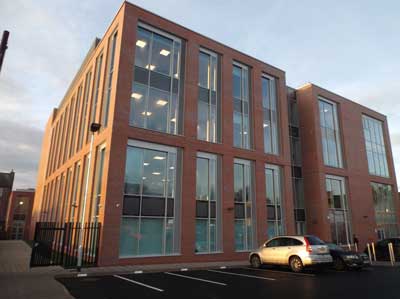 Staff parking is provided to the rear of the new building

“It’s all one large braced structure,” explains Curtins Project Engineer Joe Guest. “All of the structural stability is derived from bracing located in stairwells and in each corner of the building.”

Deciding on where to put the bracing was quite time-consuming as the building’s elevations all have numerous windows, which makes them unsuitable for large cross bracing, while internally there are very few partition walls that could have provided a location.

The two-storey part of the structure has been designed with Westok cellular beams (to assist with services integration), while the four-strorey structure was designed with SlimFlor beams supporting 200mm reinforced concrete planks sat on the beam’s bottom flange, providing the offices with the desired exposed soffit.

The area where the two types of steel-frame link provided the designers with a challenge as the floor heights did not correspond. Some complicated detailing was required to ensure the levels worked seamlessly.

As well as fabricating, supplying and erecting the steel, Border Steelwork Structures also installed metal decking in the two-storey part of the building and placed the precast planks in the office block, all of which was done with a single 50t-capacity mobile crane.

Commenting on the erection programme, Border’s Senior Contracts Manager Stuart Airey says: “With over 50 loads of concrete and 20 loads of steel, the steel and concrete works had to be planned and coordinated meticulously to ensure continuity of the build.

“We had a 12-week programme for all of our works but achieved it in eight weeks, which was greatly appreciated by the Eric Wright Construction site team.”

Prior to the construction starting, the design of the project went through a number of changes before its final form was decided on.

The client wanted a modern building that also fitted into and complemented its surroundings. A steel-framed solution was chosen for its cost-effectiveness and speed of construction.

“It’s a tried and tested method for this type of office building,” explains architects AHR. “As well as achieving the required long spans in the offices, steel is also very flexible and suitable for a range of cladding solutions, in this case glazing, brickwork and stone.”

Summing up the project, Council Leader Stewart Young says: “The Council has to make the best out of the financial situation it is in. Our downsizing deal is a crucial part of making the organisation ready to face the future. We need modern, flexible accommodation with lower overheads.

“The only way to do this is to sell off our older properties and we are already working in innovative ways with developers to manage this. It’s like making that move from a big old family home into a smaller, modern house that you know will be cheaper to run and look after.

“On the plus side, this scheme will help to secure the economic future of Botchergate. Our new office will act as a magnet to attract other businesses and regenerate the southern gateway into Carlisle, which has been run-down for quite some significant time.”