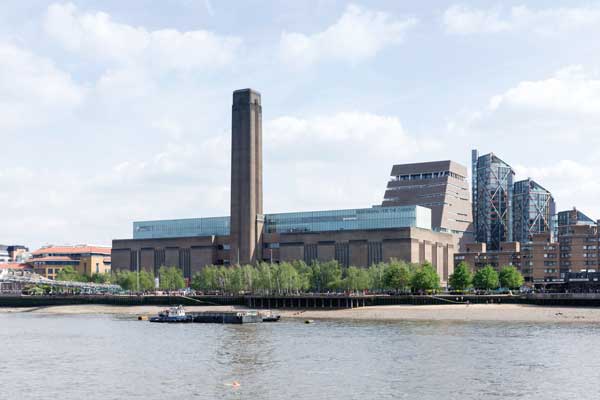 The extension tower sits behind the existing Tate Modern building

Designed by architects Herzog & de Meuron, who also designed the original conversion of the Bankside Power Station in 2000 into the original Tate Modern, the new structure has added 60% more space to the museum.

Tate Director Nicholas Serota says: “This is a landmark not only for Tate and London but also for the UK as a whole. The opening signals a new era for modern and contemporary art in the UK.”

The Switch House arranges the museum’s new spaces into a unique pyramid-shaped tower, standing 64.5m-high, with its outer structure folding into dramatic lines as it rises.

Said to be reinterpreting the power station’s brickwork in a radical new way, it is clad in a perforated lattice of 336,000 bricks, partially supported on steelwork. This unique façade is said to allow light to filter in during the day and to glow out in the evening, transforming a solid, massive material into a veil that covers the skeleton of the new building. 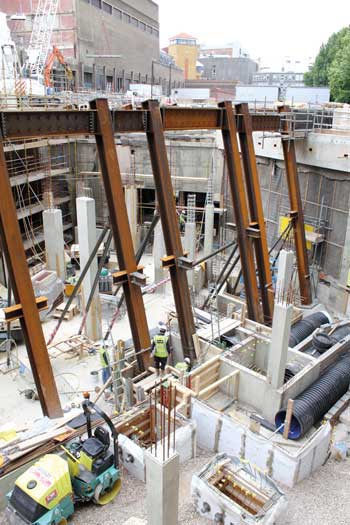 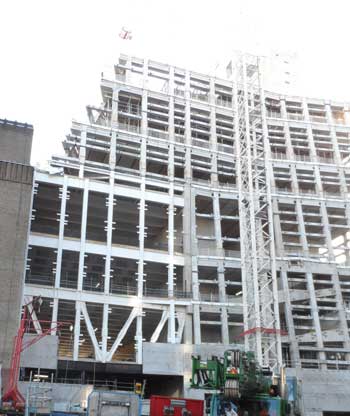 The western transfer truss integrated with the concrete frame 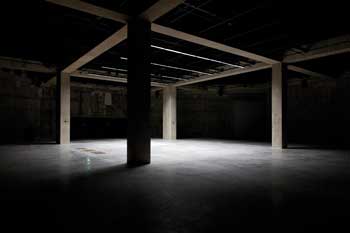 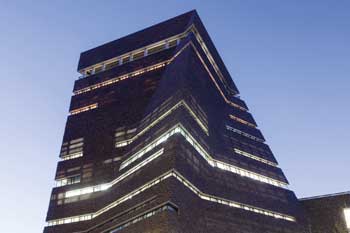 Explaining the façade, Architect Jacques Herzog says: “Our aim was to create a building conglomerate which appears as one thing, not as a phase one and a phase two.”

The resulting exterior creates both an iconic addition to the skyline and a unified Tate Modern. It also puts environmental sustainability at the heart of its design, with natural ventilation, solar panels and new green spaces.

The 10-storey Switch House has been designed as a hybrid structure with both steel and concrete-framed elements.

A total of 1,000t of structural steelwork was fabricated, supplied and erected for the project by Bourne Steel during phase one and then Severfield during phase two.

For Phase one the western oil tank steelwork was erected forming the footprint of the tower structure, including raking columns and ground floor transfer beams weighing 1,200kg/m. Also as part of the phase one works, Bourne Steel installed all of the steelwork to strengthen the existing ground slab within the original Switch House and new steelwork up to ground level.

Beginning at ground floor, Severfield began phase two by erecting and bridging over the basement spaces (known as The Tanks), with the main steel frame elements that comprise four levels that accommodate the entrance and shop, and above this three floors of galleries.

Steelwork was chosen for this part of the scheme as the material offered the best and most efficient way of creating the 18m spans required for the gallery spaces.

The steel element does not encompass the entire footprint of the Switch House extension, it shares the area with the adjacent concrete-framed tower. At fifth floor level, the steelwork actually supports the entire northern façade of the tower.

“The steel frame is formed with a series of large 1,200mm-deep fabricated beams spanning up to 18m,” explains Ramboll Project Director Martin Burden. “The large beams were needed not just as transfer structures for the fourth floor roof which supports the façade, but also to support the gallery floors that will have some heavy exhibits to accommodate.”

Working in the same way as cellular beams, all of the fabricated girders have large openings to accept services within their depth.

To support the sloping northern elevation of the tower, a 1.2m-deep steel spreader beam weighing 1,000kg/m was installed at level five. This beam distributes the loads from the perimeter structure and façade above into the level five roof beams, which, in turn, transfer the load to the core and northern Switch House columns.

In order to distribute the loads effectively, while minimizing the deflection of the north elevation, the spreader beam was supported on a series of 16 jacks. These were closely monitored during the construction of the north elevation, and jacking operations undertaken at strategic times to maintain the beam at a constant level and minimise impact on the construction above.

Once the final brick was installed, the jacks were grouted with maximum differential movement between jack locations having been limited to the required 2mm.

To achieve the tolerances required for installation of the glazing and brickwork it was essential that the deflection of the structural frame at the perimeter of the Switch House building was limited.

“Although complicated by the geometry of the tower and the various types of transfer structures, deflection limits of 1 in 1000 were achieved,” adds Mr Burden.

Other notable structural steelwork elements include a storey-high truss that was required at the level two west elevation to span over UK Power Network’s assets as well as long span transfer beams, which were installed to achieve the wide entrance openings needed for the delivery of art and installations.

Access between the Switch House and the original Tate Modern spaces, known as the Boiler House is via the Turbine Hall, which connects to the two structures.

The two are also connected via a new footbridge that spans the Turbine Hall at fourth floor level.
In order to cause minimal disruption to visiting times and exhibitions in the Turbine Hall, the 20m-long steel link bridge was fully assembled and installed on site during a one week long procedure.

With no room or access for cranes the bridge was hung from the roof structure of the Turbine Hall and pulled across the void incrementally by a series of strand jacks.

Summing up, Mayor of London Sadiq Khan says: “I’m delighted that the Tate Modern’s extraordinary new extension is now open. The Tate is an incredible success story, attracting millions of Londoners and visitors from all over the world and it is a shining example of the capital’s status as a global leader in the arts.”