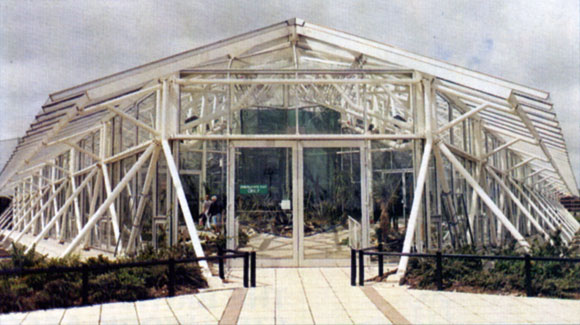 For Swansea City Council in association with Citygrove developments

Plantasia – a tropical hothouse is the central feature of the retail shopping park at Swansea.

The 1600 sq m, £2.5m theatre of planting features three main areas. An arid zone at low level is designed for cactii, while a humid fern house is at the highest level, from where water cascades down into a central pond within the main tropical area containing palm trees and exotic plants.

The hothouse is designed to be walked around. Interconnecting paths weave between areas of planting to give exciting views from all levels. The structure, designed in tubular framing, supports a glass roof space and is surrounded by a moat to receive rainwater from the roof.

The concept of a tropical hothouse within a shopping park was the idea of Swansea City Council, and is thought to be the first of its kind.

Structural steelwork was chosen as the supporting medium of the hothouse because of the need to create a light structural framework. The function of the structure was to support the glazing system, withstand wind and snow pressures, and carry the sophisticated mechanical and electrical services. A steelwork structure provided an aesthetically pleasing and cost effective solution. To this end, a solution based on tubular multiple battened columns was evolved. 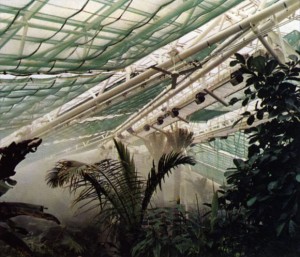 The basic truncated pyramid shape of the building is inherently stable. Overall stability was provided by a series of tripods along the walls which also gave support to the lattice girders.

Detailing of the lattice shapes and connections was very important and therefore carefully considered with the fabricators. It was essential that the structure of the building enhanced the planting layout and not detract from it. This aspect of the design benefitted greatly from the use of rectangular and circular hollow sections.

The high temperatures and high humidity levels of a tropical environment required a substantial level of corrosion protection. The chosen protection scheme was to galvanise the steel and overcoat with a three coat paint system including a micaceous iron oxide barrier and two finishing coats of silicone alkyd enamel, all applied at the fabrication workshops.

Maintenance generally was a difficult problem, but was solved using catwalks and a mobile platform that travels along the walkways. Painting maintenance will be carefully planned by Swansea City Horticulturalists to coincide with general plant maintenance.

One of the features of the hothouse design – Plantasia, was the close liaison between all members of the design team, including landscape architect TACP, and Swansea District Council, which was necessary to evolve the design. Considerable research was required into the work carried out at Kew Gardens, and the lessons learned were utilised at Swansea.

The final design and its construction satisfied the client, the builder and the designers.

This striking steel framed and glazed pyramidal building stands in stark contrast to the rather dull surrounding built environment and demonstrates how steel can be configured imaginatively and economically to provide a unique environment, in this case for a state of the art tropical hothouse, giving the local community an exciting and much appreciated amenity.