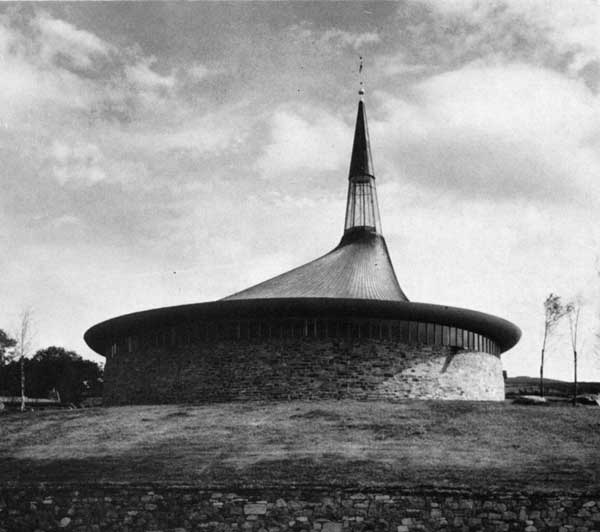 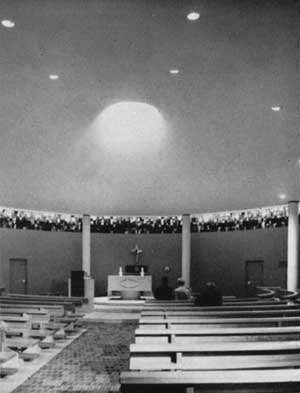 A striking landmark in an historical setting is St Aengus’s church on the shore of Lough Swilly some six miles from Londonderry. Set austerely in a mountainous countryside, the church serves three neighbouring village communities.

Near at hand, on a hilltop overlooking the church stands the circular Grianan Fort built of stone and dating back to pre-Christian times. The new church is circular in plan and seats 550 worshippers. The design incorporates an inner ring of steel columns which supports a steel and timber roof. Copper covers the roof and spire. All fittings and materials display imaginative choice. Illustrations show the startling beauty of both outside and inside of this unusual church. 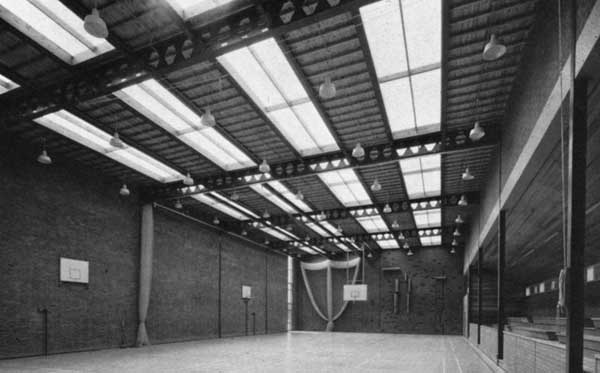 A three-year building extension programme for this college costing £375,000 was concluded a month before time earlier in the year.

Included in the project were six buildings or extensions to existing buildings, extensive car parks, external works and landscaping.

One of the new buildings is a two-storey administration block with a large single storey sports hall with squash court, together with administrative offices. 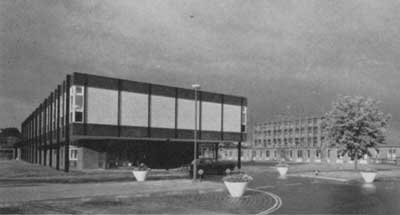 A highlight of the sports hall is a climbing wall, (see illustration) believed to be only the second of its kind in the country.

The sports hall also includes a volleyball court and facilities for basketball badminton and tennis.

Total floor area of the extensions is 65,532 sq. ft. Construction is generally traditional with the engineering workshop and domestic science blocks having structural steelwork frames; in addition the administration block and extensions to the boiler house and kitchens have part structural steelwork frames. The domestic science block is seen in the second illustration.

The whole design project was under the direction of F. B. Pooley CBE, FRIBA, FRICS, AMPTI, County Architect of Buckinghamshire. 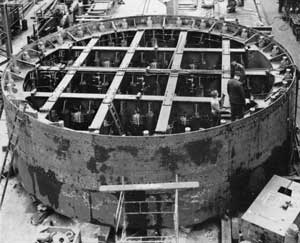 An immense tunnelling shield – the largest of its kind yet to be made in the UK – has been in operation on the cargo tunnel at Heathrow.

The main body of this shield is made up of welded segments of mild steel plate bolted together with high strength friction grip bolts. Outside dia is 39 ft, length 9 ft 11½ in and it was designed to operate in clay 22 ft below ground level. To form the twenty working cells the inside is divided by three vertical and four horizontal girders of heavy welded construction. There are sliding platforms in each of the sixteen upper cells.

The structure weights 202 tons: it was trial assembled in the fabricator’s works (see illustration) and fitted with all hydraulic equipment, sliding platforms etc. After being thoroughly tested it was dismantled and finally reassembled on site.

Consulting engineers for the British Airports Authority for the whole project are Sir William Halcrow and Partners.