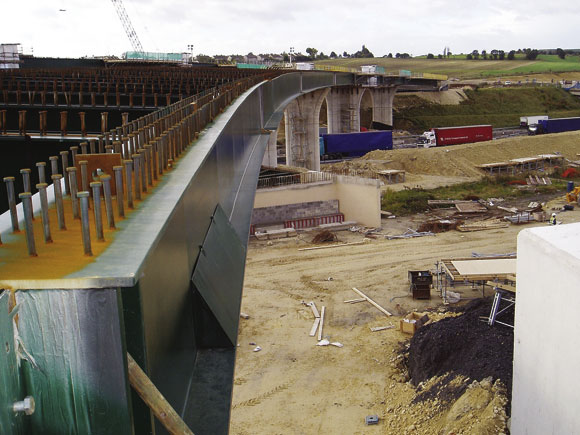 Steel overbridges are increasingly appearing on major new highways where once concrete dominated. Nick Barrett analyses the factors behind changing trends in the key part of the bridge market in the UK.

Steel has been the economic solution for medium and long span bridges since the mid 1980s, but for short span bridges on greenfield sites in particular steel has struggled – until now. Steel was typically used on only a limited number of locations, for example where its advantages of speed and ease of installation came into their own. New procurement routes like Design & Build, Private Finance Initiative and Early Contractor Involvement are giving contractors a greater say in the choice of structural material, and with greater freedom to select steel, many are taking that option.

Price is partly the reason. Steel has become more competitive. Main contractors have a detailed knowledge of the relative economics of steel versus concrete and a good understanding of project costs, which are lower for steel. Also, the Highways Agency has started taking speed of construction into account in assessing tenders, which also brings steel to the fore.

Traditional views that steel bridges involved greater whole life costs are being revised. Thanks to a relaxation of Highways Agency standard minimum headroom requirements for weathering steel road overbridges, low maintenance weathering steel is being selected for an increasing number of locations. Another reason for the improving whole life cost profile of steel bridges is that there have been significant advances in coating technology: the latest coating systems are expected to have a working life in excess of 40 years.

Steelwork contractors say steel is increasingly appreciated for ease of maintenance – and concrete is no longer regarded as quite the maintenance free material it once was. The condition of steelwork can be easily viewed, giving bridge owners the reassurance that all is well. Any problems are readily apparent, and can swiftly be addressed by repainting. The first sign of problems with concrete bridges is often spalling due to the expansive forces created by corroding reinforcement bars. 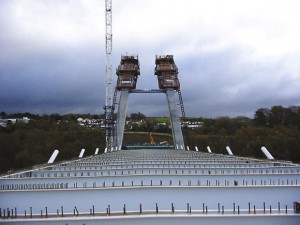 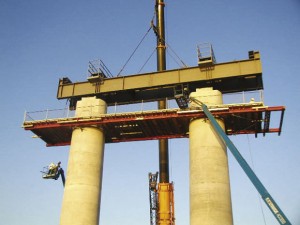 The new Swale crossing in Kent

The privately financed Birmingham Northern Relief Road, now the M6 Toll, was a major success for steel, where concrete might have been expected to capture most of the work in the past. All the 46 overbridges here are in steel – 10 years ago steelwork contractors would have expected to get hardly any business on a new motorway. The M6 Toll is significant primarily because steel composite bridges were chosen even though it was a “greenfield” site, which traditionally favoured concrete bridges.

“There were no overbridges on the M6 Toll in concrete at all, other than an extension to an existing bridge which was built in concrete some years ago,” says steelwork contractor Fairfield Mabey’s Managing Director Dr Peter Lloyd. “We have always thought that bridges with spans of over 25m should be in steel for economy if nothing else, but on the M6 Toll we saw bridges with spans as short as 20m. We are seeing this trend throughout the country and not only on PFI projects.”

Dr Lloyd says choice of steel is being increasingly justified by a range of factors, including price, whole life cost, ease of installation and because of recent technical breakthroughs in coating technology and steel fabrication. Price is still quoted by designers and contractors as a deciding factor, despite recent steel price rises. “There is a lot of steel even in a concrete deck,” says Dr Lloyd. “A typical steel bridge might contain 326t of steel while a reinforced concrete one still has some 226t. Rebar prices have risen over the past year, with the percentage rise far exceeding that for the steel plates that are normally used for bridge fabrication, and the concrete industry has issued further price warnings recently due to rising energy and raw material costs. Consequently, the competitive situation remains largely unchanged.”

It is difficult to compare prices due to the difficulty of comparing like with like. “Until very recently, there have been no reliable figures for the market share of steel versus concrete bridges, and no long term evidence of price trends specifically for bridges has been collated,” says Chris Dolling of Corus. “But we can use structural steel versus in situ concrete figures as reasonable proxies. Although these relate to buildings rather than bridges, they come from a neutral source, the Department of Trade and Industry.

“These figures show that concrete construction prices have risen by 20% more in real terms than steel over the past ten years or so, despite the recent steel price rises. Today’s structural steelwork prices are the same in real terms as they were in 1995.”

A market survey produced for Corus by Construction Markets shows that in 2003, in terms of deck area, steel accounted for 88,900m² out of a total of 165,000m², with 23,000m² precast and 53,300m² in situ concrete. Dolling said: “We do not have comparable figures for earlier years but the figures confirmed to us that steel has made a major breakthrough into the market for road bridges.”

Technical breakthroughs have also enhanced the prospects of steel. For example, says Dr Lloyd, being able to curve steelwork in plan without cranked joints is a major development in bridge fabrication of the past five years. “This gives two major advantages, firstly by significantly improving the aesthetic appearance of a structure as all of the main structural members can form smooth curves throughout its the entire length; and secondly, the construction of a typical concrete composite deck is much simpler, allowing a standard size of precast “Omnia” planks and a standard edge cantilever formwork system to be used throughout. There may be some additional costs associated with the steelwork fabrication and erection, but these are far outweighed by the savings in the deck construction.” 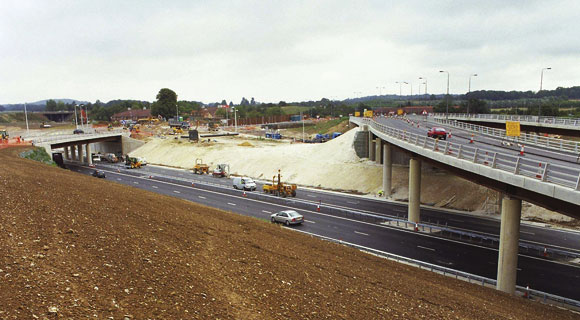 Steel was chosen for the recently completed £38.5M Chieveley A34/M4 junction 13 improvement contract, awarded to design and build contractor Costain with designer Mott MacDonald. It is believed to be the first contract where the Highways Agency assigned a monetary value to speed of construction in assessing tenders. It is also one of the first projects to benefit from the Highways Agency’s reduction in the minimum headroom for weathering steel girders over roads from 7.5m to the standard 5.3m.

The contract includes five steel overbridges carrying A34 slip roads and a local road which crosses the A34, all of steel composite construction using weathering steel, despite having been shown as concrete in the illustrative design on which tenders were based. David Place, Project Engineer in Mott MacDonald’s bridges department, says: “We had to come up with the lowest capital cost, the lowest whole life cost and a solution that would be quickest to build. Without a doubt, for a bridge over a motorway or dual carriageway, for a two, three or four span structure 40m to 100m in overall length, we regard steel composite as the market leader.” 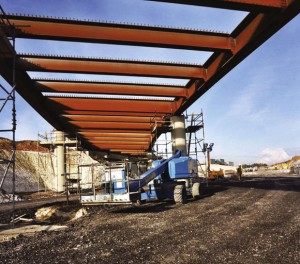 A key reason for the growing popularity of steel is that steel decks can be quickly lifted into place during limited carriageway possessions, whereas concrete needs a lot of scaffolding which effectively closes carriageways for extended periods. Even on greenfield sites where lane closures are not a factor, steel appeals because it allows haul roads to be kept open during bridge construction. The main steel for each bridge was erected in under a week.

Dr Lloyd says: “Steel bridges can also be strengthened to meet changing needs easier than concrete bridges. In the event of a bridge-bashing incident steel girders will deflect and can be put back on line using a process of heat straightening. But in a concrete bridge the edge beam may need to be completely replaced if a tendon is broken.”