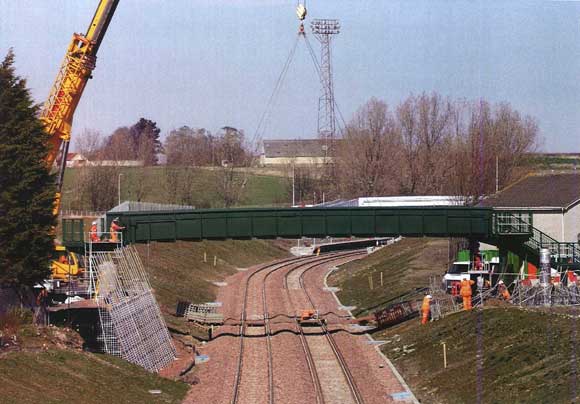 A central span is lifted into position in one piece

The UK’s newest railway is gearing up for service as steel bridges play their part in this groundbreaking project.

The route was originally opened in 1849 as the Waverley Line and once linked Edinburgh and Carlisle via Midlothian and the Scottish Borders. However as with many branch lines and cross-country routes the line was closed down in 1969.

Pressure from commuter groups finally persuaded the Scottish Parliament to endorse the partial reopening of the line in 2006, with construction work finally kicking off in April 2013.

Although the construction project initially only involves reinstating the 30 miles of line from the Scottish capital to Tweedbank, it has been mooted that if the railway is successful then the remaining 70 mile stretch to Carlisle could also be rebuilt. 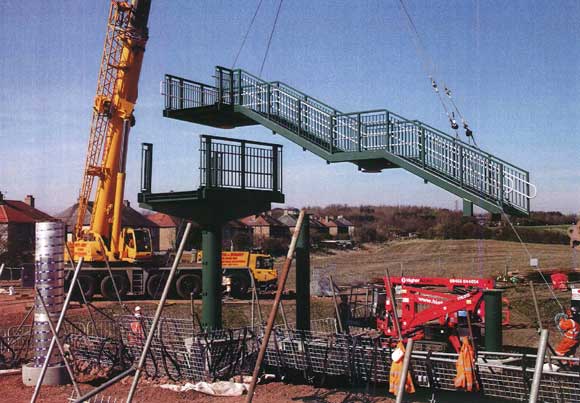 According to Transport Scotland, the £294M project will deliver major economic and social development opportunities by providing a fast and efficient rail link.

It will significantly increase the accessibility of jobs for the people of Midlothian and the Borders, and as a result of creating an attractive public transport alternative to the car, approximately 60,000 peak car trips per year will be cut from the region’s roads.

The Borders Railway has 10 stops, seven of which are newly constructed stations. A total of 95 bridges have been refurbished for the project and 42 new bridges constructed by main contractor BAM Nuttall.

Four of these bridges were new steel footbridge structures fabricated, supplied and erected by Cairnhill Structures.

All four footbridges are located in the north section of the railway project – near Dalkeith, which is just south of Edinburgh. 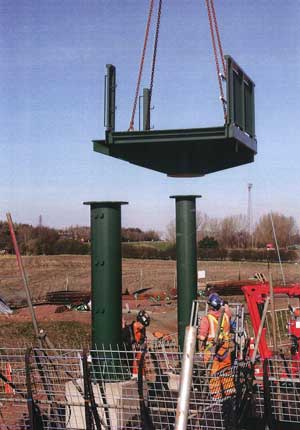 A prefabricated unit is lifted into place

Two of the bridges serve newly constructed railway stations at Shawfair and Eskbank, while the other structures form public crossings across the railway at Station Road and Old Craighall, both near Shawfair.

All of the bridge’s spans vary in length with the longest at Old Craighall measuring 24m long and the shortest at Eskbank measuring 10m long.

In order to maximise steelwork’s speed of construction and minimise onsite work, all of the bridge decks arrived for installation as complete units with their balustrades already in place.

Using a variety of mobile cranes, with the biggest having a 350t-capacity, Cairnhill’s installation programme for each bridge was completed in a single day.

“We had to install supporting columns and then lift and bolt the various bridge and ramps sections into place,” adds Mr Sanderson.

Cairnhill completed its work earlier this year in readiness for the Borders Railway grand opening in September.

The new Shawfair station will support a large community in the area, including the nearby villages of Danderhall, Newton, Millerhill and Harelaw. The station will also serve 4,000 new homes as part of a £200M development plan recently unveiled by Shawfair LLP.

The new development will see the construction of two primary schools and a secondary school along with an estimated 92,000m² of commercial and retail space available for businesses.

Shawfair station will have bus links and easy access to Midlothian’s extensive path and cycle network. It will have two platforms with sheltered areas for passengers, car parking for up to 59 vehicles and cycle storage for up to 10 bikes.

Celebrating its 35th anniversary this year, Cairnhill  Structures has recently been awarded National Highways Sector Scheme 20 (the execution of steelwork in transportation infrastructure assets) to its list of accreditations.

The award is apt as the company has for most of its lifetime been involved with bridge projects, such as strengthening work, refurbishment, repairs and overhauls.

Other steel bridges on the Borders Railway 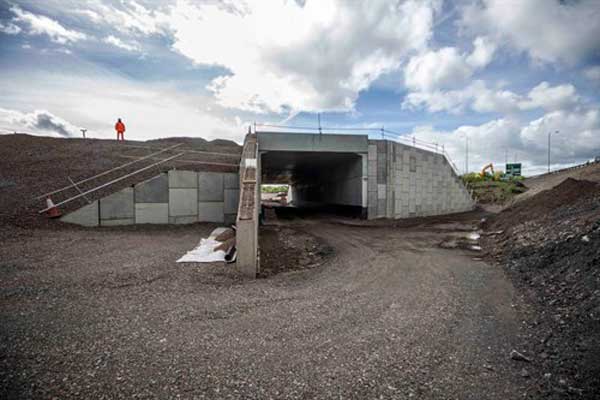 One of the many steel bridges erected in south Edinburgh