Posted on July 1, 2005 by NSC2 in Publications, Technical 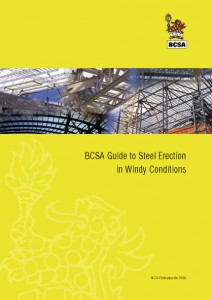 The BCSA has prepared a further guide in its series of publications that deal with steel erection. Last year two new codes of practice were launched that dealt with the Erection of Low Rise Buildings and Metal Decking and Stud Welding. The new guide focuses on the specific issues associated with windy conditions.

The preparation of the guide was commenced in 2004, shortly after a court case in which a steelwork contractor had pleaded guilty to failing to provide information concerning the maximum wind speed in which columns could be safely erected free standing. Commenting on this aspect of the case, the judge wondered why industry standard guidance had not been published on such a potentially hazardous issue.

Responding to this judicial criticism, the BCSA prepared draft guidance for review and has consulted widely with other parties over the intervening period. The completed guide is wider in coverage than the specific issue of the maximum wind speed in which columns should safely be erected free standing. It covers the role of management and supervision in controlling work as wind freshens, as well as giving comparative information concerning weather forecasts that might be used to plan steel erection. Advice is also provided for designers concerning aspects raised by the effect of wind on steelwork during erection, and this invokes the latest European Standards.