Filling up with steel 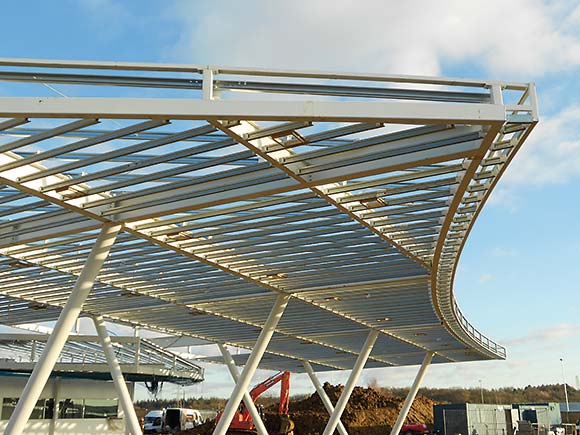 Located on a site once known as Soothills and associated with the town’s once thriving steel industry, a new 7,432m2 Tesco store and petrol filling station has opened in Corby, Northamptonshire.

The store is one of the largest in Corby and boasts plenty of environmental features, but it is the adjacent petrol station that immediately captures the eye.

Structurally both are independent steel structures, with the larger canopy slightly oversailing the smaller canopy and so providing the facility with a standout feature. 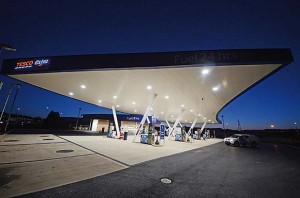 The canopies consist of two overlapping but independent structures

As the Tesco store and petrol station are positioned on a busy main road, the local council’s planning department wanted a striking entrance feature to the development. This would highlight the project and act as a monument to the site’s regeneration.

Initially two locally based architectural and engineering firms developed the petrol station scheme along with the store. However, once Barr Construction was awarded the contract it decided to employ its own teams to redesign and deliver the job.

“We decided we needed to deliver a safe and buildable structure based on the original design and steel was the only option that could create the required shape,” Robert Mackay, Barr Construction Engineering Design Manager.

The canopies are curved in plan and wedge shaped in section, therefore every purlin cleat and soffit cleat is a different size and had to be fabricated at individual angles to suit the design.

“This was one of our most challenging projects, technically and erection wise, as all of the steelwork is bespoke and individual,” says Ian Elliott, Border Steelwork Structures Senior Project Engineer.

The smaller canopy is supported by a series of vertical square hollow section columns, but the large canopy has four pairs of distinctive 8m raking CHS columns.

The raking columns have fixed base connections for stability of the structure, resulting in larger foundations than would normally be required.

The roof is wedge shaped, with a flat soffit so the heads of each of the CHS columns had to be at the same level. Keeping the steelwork level but aligning the purlins to provide the required profile achieved the shape of the roof.

The steelwork for the canopy roofs includes a series of cantilevered beams. They are designed as continuous, where possible, to reduce the moment at the column connection by balancing the forces.

“Trying to coordinate the design and illustrate on plans the simplest way to build the canopies was the biggest challenge,” says Mr Mackay. “This is why we kept the canopy roof steel flat across the column pairs, which gave us level setting out points along the grids.”

However, the roof wedge shape was made difficult by the fact that the curved sides are different radii with differing centre points; therefore, there was no simple solution to the purlin layout but to ‘fan’ them about one of the radii. This meant almost every purlin cleat was a different height.

Border Steelwork Structures erected the small canopy first and then the larger structure, with the latter requiring temporary propping due to the large cantilevering steelwork.

“The larger canopy had to be erected in a certain sequence to allow the columns to act against each other in balance,” says Stuart Airey Border Steelwork Structures Senior Contracts Manager. “Once the canopy was fully erected the frame became stable and temporary works were removed.”

For aesthetic reasons both structures feature deep gutters formed within the steelwork along the edges of each canopy. This means the gutter is mostly hidden with only the edge facia visible.

Drainage connections have also been coordinated to go through the steel edge beams and routed within the canopy to column positions. The only evidence of any drainage are the exposed downpipes positioned adjacent to the columns.

The Tesco store and petrol filling station has been open since May and according to the local council the canopy’s design has achieved the desired landmark effect.