Steel gets heads up for hub development 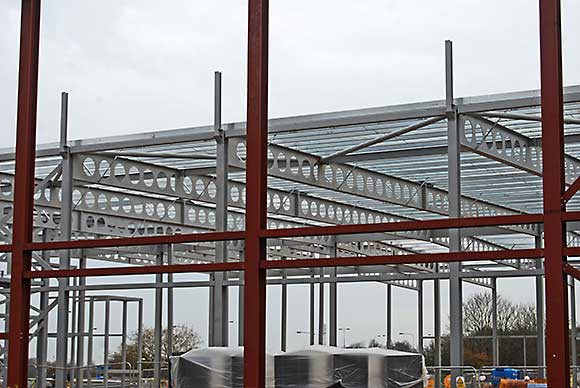 The Waitrose store steelwork seen through the leisure centre’s frame

A supermarket and leisure centre will form part of a new gateway hub to the Buckinghamshire town of High Wycombe. NSC reports.

The project’s first phase will consist of a new sports and leisure centre, a Waitrose supermarket, a multi-storey car park and a coachway park and ride facility. Further phases to this multi-million pound scheme will include a hotel and office blocks.

Main contractor for the development’s first phase is Willmott Dixon and currently it is constructing the sports and leisure centre along with the adjacent Waitrose store.

The company has been on site since April and preliminary works included a large earthmoving programme that involved excavating areas for the scheme’s swimming pools.

“No overburden has left the site as it’s all been used to raise the ground level in readiness for the two building’s steel frames to be erected,” explains Willmott Dixon Construction Manager, Stuart Rooney.

Steel erection began late last year (2014) with the leisure centre contract kicking off a couple of weeks ahead of Mifflin Construction’s package to erect the store.

Using steel for both of these structure’s was always on the cards according to Curtins Project Engineer, David Sandbrook.

“Since project concept these two buildings were designed to be built with steelwork, mainly for its versatility and the need for long clear spans.”

The Waitrose store is a 65m wide x 80m long rectangular shaped building, designed with a braced frame, chosen instead of a portal frame for its efficiency.

“With a braced frame we have used smaller sized columns than we would have with a portal frame, and that was important as larger columns would have eaten into the store’s valuable sales floorspace,” says Mr Sandbrook.

In order to make the internal spans manageable the store is divided in half by one row of internal columns spaced at 12m centres, creating two roughly equal clear column zones of over 30m. This has meant minimal intrusion into the sales area and allowed Waitrose to maximize the options for the store layout.

Flexibility has also played a key role in the store’s design as provision has been made for a mezzanine floor to be retrofitted if required in the future.

The Waitrose store is expected to open by the end of the year. 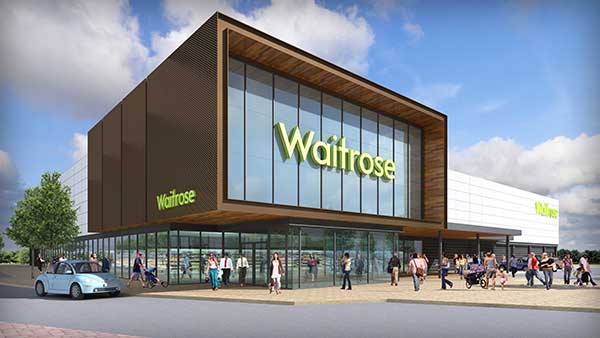 Marked A on the mapWith more than 2,300m² of trading space, the new store will sell a full range of Waitrose and branded products. It is anticipated that it will create around 160 new jobs in High Wycombe.

Waitrose Director of Development, Nigel Keen, says: “This is an exciting opportunity to provide High Wycombe with the full offer from the John Lewis Partnership.

“Waitrose will complement the existing department store, delivering our very latest range of goods and services, more choice and creating a significant number of jobs for local people.”

Cllr Tony Green, Cabinet Member for Economic Development and Regeneration at Wycombe District Council adds: “This is a real boost for High Wycombe’s retail offer given the new employment Waitrose will bring and the increased consumer choice that the branch will provide. These are exciting times for the district and the Handy Cross Hub development is set to play a positive role in its future.

Marked B on the mapThe steelwork for the Sports and Leisure Centre is being fabricated, supplied and erected under a separate contract from the Waitrose store.

The Sports and Leisure Centre will eventually replace the site’s existing sports centre when it opens in 2016. Designed by AFLS+P architects, the 10,750m² rectangular centre will be clad in copper and aluminium panels that have four different finishes.

The steel framed structure will have a host of facilities including an eight lane 50m-long pool with moveable floor and sub-aqua dive pit; a 20m-long learner pool; a toddlers pool; a 150 station gym, a dance studio, 12 court sports hall, a bowls centre, two squash courts, and a café.

Most of these facilities require long clear spans and this was the main reason why the project team chose steel as the framing material.

A series of 31m-long trusses span the main pool hall, a distance that covers not only the width of the pool, but also walking areas and an area of spectator seating.

Trusses were chosen for the pool for aesthetic reasons, as they will be left exposed within the completed building. This was not such an important consideration for the other large open plan areas and so spliced 35m long cellular beams form the sports hall, and 24m-long cellular beams span the bowls centre.