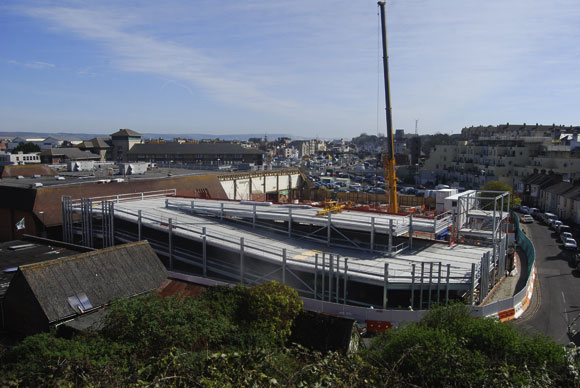 A large supermarket in Weymouth is expanding its operations and a cost effective steel framed twin decked car park is central to its plans.

Main Client: ASDA
Architect: HGP Architects
Main contractor: ISG
Structural engineer: Bourne Engineering
Steelwork contractor: Bourne Parking
Steel tonnage:340t
The retail construction sector has had a bumpy ride of late, but there are signs that new projects are in the offing and those much talked about green shoots of recovery may now actually be visible.

On the south coast for instance, ASDA is expanding its operations in the town of Weymouth. Its large town centre supermarket is being enlarged and a crucial element of the store’s plans revolve around the construction of a new customer car park.

A new twin deck steel framed car park, with more than 300 parking spaces, is under construction adjacent to the existing store and although it is structurally independent, it will be linked into the ASDA supermarket via a first floor footbridge.

The car park measures approximately 60m wide by 80m, and will feature three levels, ground, first and an open second floor level. The main steel frame is based around a 16m x 2.4m grid pattern, with each bay equal to one parking slot.

Bourne Parking is erecting the car park using its modular Montex system, which it says offers customers modern, cost effective and low maintenance structures. According to the company the main advantages of the system are the reduced time required for construction, minimal disruption during the construction phase, while its lightweight frame minimises foundation costs.

Montex car parks are erected sequentially, in a phased method to full height. For this project everything is being delivered to site on a  ‘just in time basis’ which eliminates on site storage of materials and allows the contractor to quicken the construction programme. 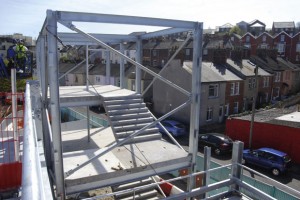 The system consists of precast slabs which act compositely with a supporting steel frame of columns and beams. All columns used on this project are 12m-long members, reaching the full height of the structure. Meanwhile, all of the 16m-long steel beams are precambered and the deck structure is laid to incorporate a 1:60 slope, either side of a central column line to allow for rainwater run-off.

All beams arrive on site with attached shear studs and once they have been erected a precast slab is positioned between these studs. The joint between adjacent slabs is then filled on-site with a high strength grout completing the composite joint. “The composite beam and slab system allows for a slimmer beam to be used, which is a significant cost saving to the customer, while also allowing for long clear and uninterrupted parking areas,” explains Dave Pope, Bourne Parking Operations Director. “The 110mm thick slabs, which are made to our own bespoke design, require no further topping, and arrive on site pre-finished, greatly increasing efficiency.”

Structural stability for the car park is provided in the form of chevron bracing bays located around the car park’s perimeter.

“The stability of the structure is achieved by the diaphragm action of the composite deck transferring applied horizontal loads to bracing systems located symmetrically throughout the structure,” says Mr Pope.

Extra stability is needed during the erection programme when the newly erected steelwork has not been braced. Bourne Parking are inserting temporary knee braces using Lindapter ‘clamp’ type connections. These have the advantage of easier installation and removal, while also not requiring any holes to be drilled into the new steelwork.