From Building with Steel, May 1961

Castella beams are used to considerable advantage in the roof construction of a very large Design Office which forms part of the new offices of Messrs Hawker Aircraft Ltd (Now incorporated in the Hawker Siddley Group) at Richmond Road, Kingston-upon-Thames.

The site for the new offices was created by the demolition of several bays, formerly used as stores, of the existing factory. The area provided was approximately 120ft deep by 500ft wide and the new multi-storied offices occupy the whole site in the shape of a hollow U, in the arms of which is contained a new stores for the factory and ground floor with the design office at first floor level above the stores.

The planning of the design office was severely restricted. In addition to the central area above the stores the design office floor extends lengthwise into the main block, forming an area of approximately 80ft x 500ft with as little encumbrance from columns as possible.

Only the short end walls to the Design Office provide natural lighting, one long wall being common with the factory, and the other with the administrative offices. Uniform high-intensity natural lighting is of prime importance. Heating, artificial ventilation and acoustical isolation from factory and external noises also made demands on the structural solution. 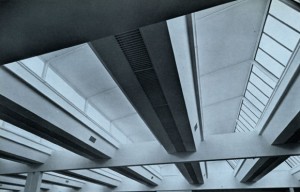 The roof of the Design Office at the offices of the Hawker Aircraft Co Ltd.

A detailed investigation of various structural systems to provide adequate natural top light was carried out. As it had been decided that a minimum clear height of 15ft was desirable in such a large office, the overall construction depth of the roof had to be limited to around 6 ft to avoid obstruction to the second floor windows of the main office block.

For this main reason, and other considerations, many of the more conventional North-light steel or concrete shell types of structures were abandoned.

The monitor type of roof, steel framed as was the main office block, offered many advantages in time, money and performance. By adopting shallow monitors every 15ft a very even distribution of natural lighting with a satisfactory depth of construction was achieved.

One development of this system was the use of trusses of inverted triangular cross section spanning 80ft with the monitor framing bridging the gaps between the trusses. As the problems of artificial lighting and the ventilation system were pursued, however, the development was superseded by the scheme as constructed using Castella beams.

This was made possible by the introduction of a central spine beams with columns at 50ft centres. The central beam, a welded plate girder, carries pairs of Castella beams between each line of monitors, of 40ft span. The introduction of one interior column for every 400 sq foot of floor space has placed little or no restriction on the maximum efficiency of floor usage.

The standard of finish required was very high and so determined efforts were made to design the roof as a complete unit rather than, as is seen too often in similar buildings, a non-cohesive compromise of structure, cladding and services. The architectural and engineering design team were able, as indeed they should, to achieve a very satisfactory solution.

The monitors run from east to west and to prevent a build up of summer heat, and to prevent direct sunlight from upsetting the very uniform level of daylighting, the vertical southern faces of the monitors were glazed with ‘Plyglass’ panels in metal window frames. These provide a diffused light with some heat insulation. On the northern faces of the monitors, standard patented glazing is used but no opening lights are provided in the monitors, which are made dust proof. A heating coil is provided to compensate for thermal losses.

The monitors are framed by 4 in × 11¾ in joists, welded to shape, with longitudinal angle rails at their top corners. They are roofed with patented aluminium decking finished with bituminous felt on insulation board. A fibre board soffit is provided to the decking to increase the reflective value in natural light and to reduce reverberation.

The pairs of Castella beams forming the main structural carriers are covered by a concrete deck, screeded to falls and weatherproofed with asphalt. As designed it was intended that precast concrete units should be used, but with an in situ concrete deck the advantages of composite construction in which the deck forms the table to a Tee beam of which the Castella beam is the stalk would undoubtedly provide an even more economical solution. 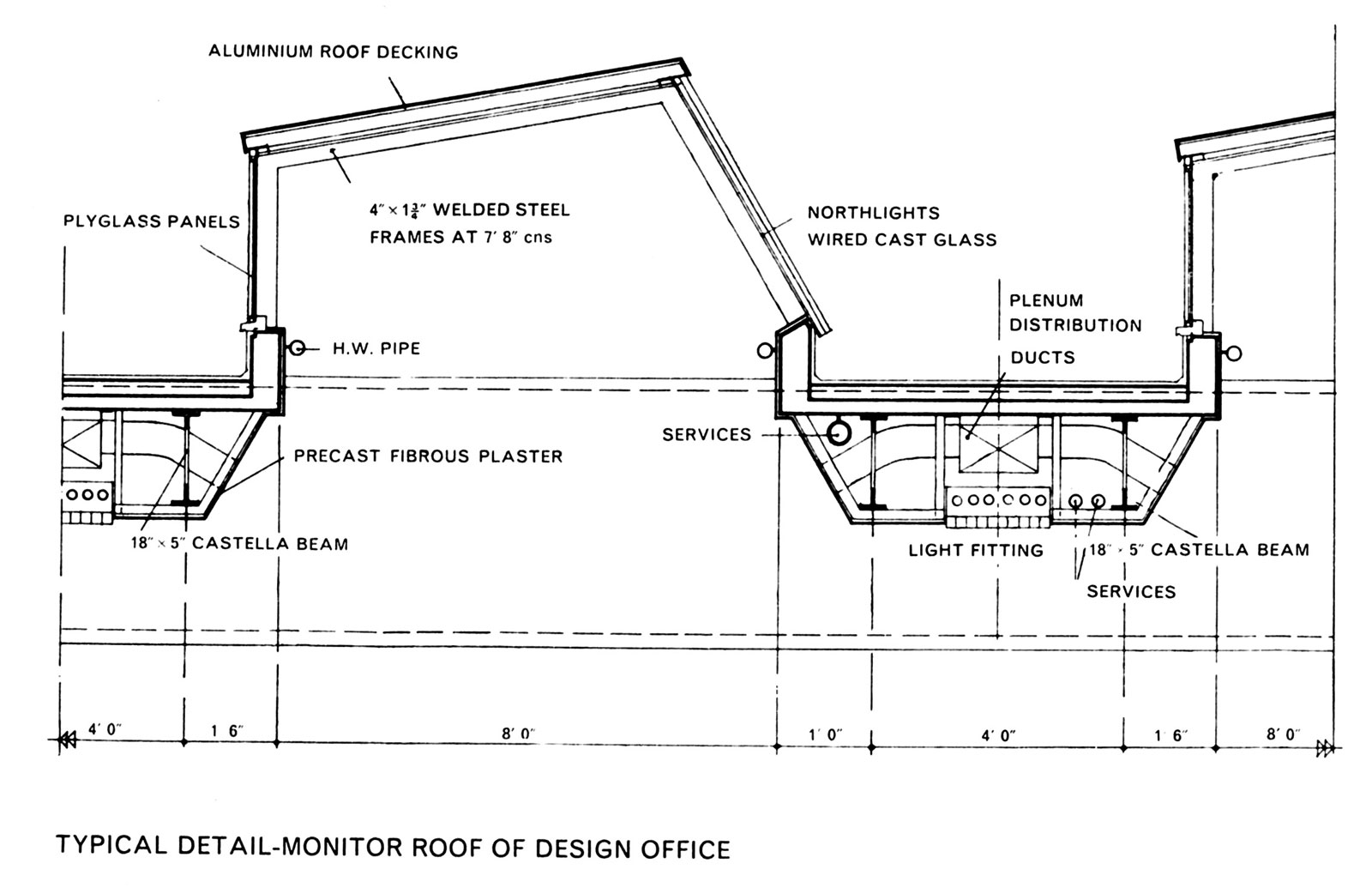