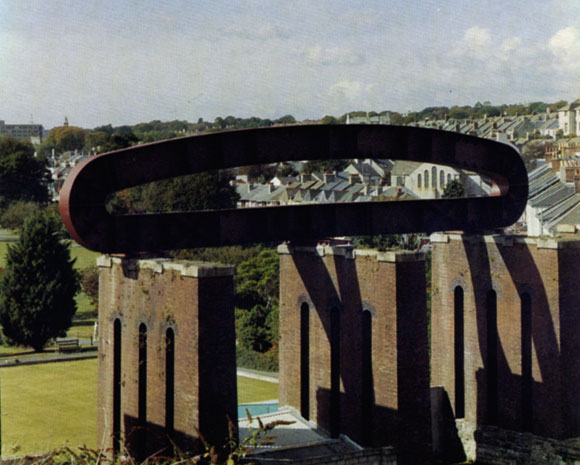 This series of red brick columns standing close to the existing Penzance line are all that remain of a viaduct which once carried the boat train to Millbay Docks. Here travellers would have boarded one of the great cruise liners ploughing its trans-atlantic route. Richard Deacon’s large steel sculpture sits aside three of these columns as if they were plinths for sculptures in a vast open air gallery. The artist has provided a new function for these otherwise obsolete piers.

The organic shape of the sculpture, which is nearly 100ft long, recalls the shape and construction of the coastal railway running from Exeter to Plymouth, it also echoes the extraordinary architecture of Brunel’s great bridge across the River Tamar a few miles down the line. Though abstracted, the sculpture derives both from Richard Deacon’s childhood memories of Plymouth, where he grew up, and his fascination with the great engineering achievements of the 19th century.

Richard Deacon often makes sculptures which refer to real objects. In this case, the references could be to the industrial fabrication of a temporary bridge of the sectional construction of an aircraft fuselage. The changing form only becomes aparrent on exploring the sculpture from all sides.

Richard Deacon is acknowledged as one of Britain’s leading contemporary sculptors. His interest in making large sculptures for both rural and urban landscapes continues a rich tradition in British sculpture, exemplified by the outdoor works of Barbara Hepworth and Henry Moore. The sculpture was comissioned by TSWA in partnership with British Railways Board Corporate Community Fund. With thanks to Royal Mail, Blight and White Ltd, (Dr Roger Pope, Bob Hyrdziuszko), Kenchington Little plc, Nick Hanika, The British Constructional Steelwork Association Ltd and Lisson Gallery (Nicholas Logsdail).