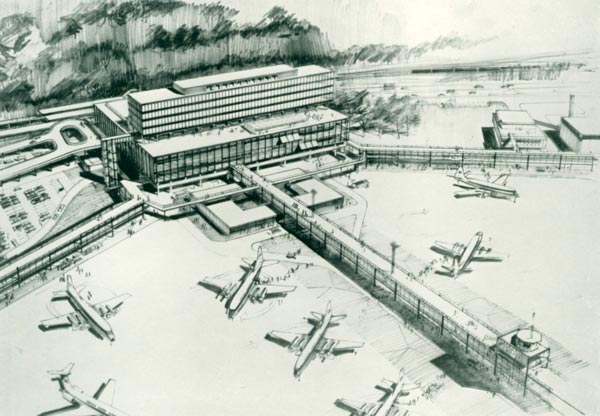 From Building with Steel November 1963

Construction work which will more than double the size of the terminal building at London (Gatwick) Airport has started under a £2.5 million contract. Ancillary work includes the construction of a third pier and extensions to the operations block.

The airport was the first in Europe to use the pier system of passenger handling and the first in the world to combine air, road and rail transport in one unit.

Initially the airport’s business was provided by services to the Channel islands, with high traffic peaks at summer week-ends, but the growth of inclusive tour activities has provided important and valuable increases in traffic. 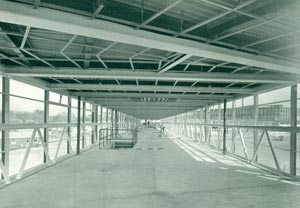 Gatwick’s passenger throughput in 1961 was over 800,000 and rose in 1962 to over a million. It is anticipated that by 1965 the figure will have risen to 1.6 million and to nearly 2.5 million by 1970. Thereafter the total is expected to continue to rise substantially. It is estimated that London’s 1962 level of passenger traffic, approximately eight million, will more than double by 1970.

The work now started is due to be completed by the summer 1965. It is hoped also to start on an extension of the runway this year to enable Gatwick to handle the larger aircraft likely to come into use on short and medium-haul services as well as the largest jet aircraft on diversion from Heathrow. It is not intended, however, to make the Gatwick runway as long as the main runways at Heathrow.

In the phase of construction about to begin the terminal building will be increased in size on plan from 350 ft by 130 ft to 350 ft by 290 ft. To preserve continuity throughout the project the new section will employ the construction used in the existing building, a reinforced concrete frame with external glass cladding which will be supported by exposed steel joist mullions. 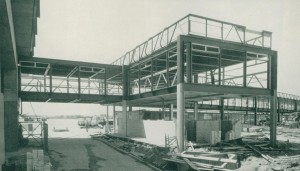 The new section will have mezzanine, concourse and restaurant floors, the main concourse being at first floor level.

The spaces between these beams and the upper and lower concrete slabs will be utilised for the baggage conveyors and as ducts for the many services required in a building of this type.

Over the double concourse area, steel trusses will be used to support the roof which will be of galvanized steel decking covered with insulation board and roofing felt. White chippings will provide the final service. 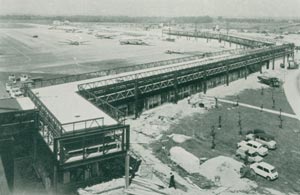 he southern pier will follow the type of construction used for the centre and northern piers and will have a main structure of exposed welded steelwork which will be painted black. It will be approximately 1,000 ft long. Portal frames at 40 ft centres will carry trusses and first floor and roof levels, in the form of tubular steel lattice girders, the top members of which will also form the handrails for the respective floors. The portal frames will be constructed of Universal beams pinned at the base.

The existing operation block contains briefing rooms, flight information tele-communications and meteorological services and similar facilities of direct interest to air crews and airline operators and is situated beneath the central pier to the west of the terminal building. The frame consists of welded steel box-section stanchions supporting lattice girders fabricated from square-section mild steel tubes spanning 36 ft. Cladding for the building is prefabricated and is composition board in aluminium frames.

The roof is galvanized steel decking with three layers of roofing felt on insulation board with a top surface of asbestos tiles.

The extensions to this building will increase its size by approximately 30 per cent.

Although the existing passenger handling building is being modified it will remain in use until the extensions are virtually complete and able to handle passengers until the modifications are carried out. It is hoped to keep inconvenience to a minimum.

Three piers will be in use when the scheme is completed in 1965, and this will lead to the introduction of a new system of passenger flow. The northern and central piers will be used exclusively by international passengers while the southern pier will be partitioned to cope with domestic as well as international flights.

Among new amenities for passengers are two additional buffets and a call-order restaurant. Additional accommodation has been provided for the airport management, Customs, Health and Immigration authorities and for the airline operators. Accommodation for the reception of V.I.P.s is being provided in the North Pier.

The present central pier serves nine aircraft stands, augmented by parking areas away from the pier. The provision of the North and South Piers will bring the total number of pier-served stands to 26. These will be augmented by a small amount of parking area.

The architects were Yorke, Rosenberg and Mardall. Consulting engineers for the whole airport: Frederick S. Snow and Partners.