A beacon for the arts 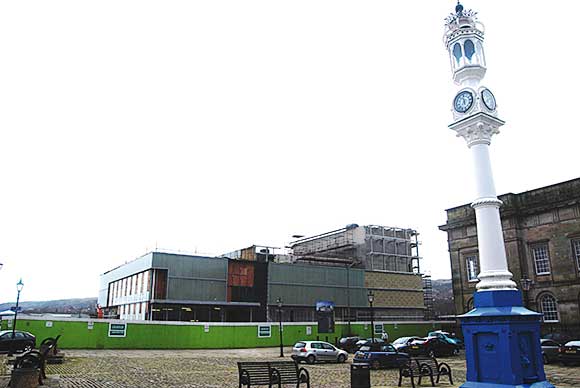 Installing a vast array of time-consuming acoustic pads was the key to a successfully completed steelwork programme on a new arts venue. Martin Cooper reports.

Part of a larger redevelopment of the waterfront at Greenock, a new multi-million pound arts centre is set to give the former shipbuilding town a much needed boost.

Located on the site of the old Lamont dry dock, adjacent to the town’s historic Georgian Customhouse, the centre’s design has taken full advantage of unobstructed views across the River Clyde while an illuminated façade will highlight its nautical heritage by acting as a beacon to the arts.

Aptly known as the Beacon Arts Centre, the venue will replace an older venue in Greenock which has been home to the local arts guild for over 60 years. The new building will house a 500 seat main auditorium, a smaller studio theatre, dressing rooms, rehearsal rooms and other back-of-house facilities. Overlooking the river there are meeting rooms set above the main entrance foyer and a cafe. 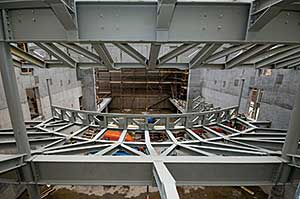 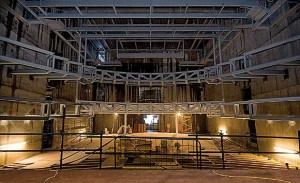 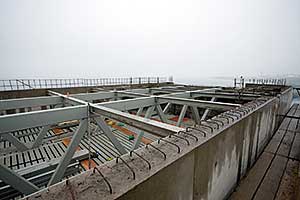 The structure has a compact design arranged in a rectangular plan, although the mass of the theatre with its fly tower gives the structure an irregular form. A hybrid construction methodology has been employed, with concrete walls enclosing both the auditorium and studio theatre, and steelwork then tying the structure together by forming the front elevation, the entire roof as well as the innards of the venue.

“We’ve used concrete for its acoustic properties needed for enclosing the theatre spaces,” explains Neil Dely, Buro Happold Project Director. “While steelwork provided the best solution for the required long spans, as well as offering a lighter and economic solution for other areas.”

As the frame of the building involved two materials going up simultaneously, teamwork and coordination played key roles on this project. Before steelwork erection started, a concrete basement and a ground floor slab had been completed. This allowed the theatre walls to be cast with steelwork erection following on closely behind in this area.

“In other areas steelwork was erected first, such as the northern elevation containing the entrance and meeting rooms,” says Graham Construction Project Manager Stephen Bradley.

Using two materials for this bespoke design threw up the main design challenge associated with this project – how to acoustically isolate steel from concrete.

Each steel to concrete connection – there are a lot of them requiring approximately 2,500 bolts – needed a specially designed connection. Cast-in plates with pre-drilled holes to accept the steelwork were installed as the concrete was formed, this allowed steelwork to be fitted directly to the plates without the need for welding.

However, once it came to installing steelwork externally to the auditoria concrete walls, each steel member’s connection had to include acoustic pads.

“Because of the acoustic isolation process the steelwork erection process took much longer than a tonnage of this size would normally take,” says Trevor Irvine, General Manager Structural Division for Walter Watson. “All of the connections, including those on the outside of the theatre’s concrete box, had to be individually set-out before the steelwork could be installed.” 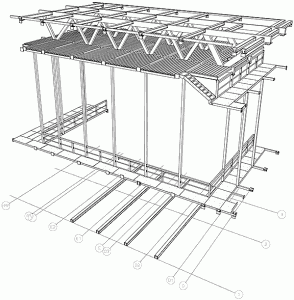 Diagram showing the trusses which support the roof above the stage, the technical gallery within their depth, and catwalks below

Forming the interior and top of the concrete box of the main auditorium is an array of steelwork. Two 20m-long box section trusses were installed at roof level above the auditorium, and craned into preformed sockets in the concrete walls.

A 170t capacity crane lifted each 10t proscenium truss into place, and once they were in place they were bolted up and the connection concreted up.

Each truss is multipurpose, supporting the steel roof beams above, accommodating a technical gallery within its 1.9m depth, and finally below, catwalks that circle the auditorium are suspended from them.

The auditorium’s stage is formed by a raised steel frame platform of columns and beams, while the two upper seating levels are also steel. A topmost seating gallery is cantilevered from a steel frame at the back of the auditorium. Below this, a complex steel framed balcony level is suspended from just two CHS columns.

The architectural balcony design was formed with a series of semi circular box trusses bolted together on site. To get the balcony’s shape, faceted sections were later added on site and bolted to the completed trusses.

Within the studio theatre there is more steelwork as a series of 14m-long steel beams form the roof, a structure that also supports a steel framed control box, which gains additional stability by being connected to a concrete wall.

Facing the riverfront the entire northern segment of the arts centre is entirely steel framed. This two-storey area contains at ground floor level the main entrance, a lobby and cafe, ticket office and the general theatre administrative rooms. A steel feature staircase leads upstairs to a first floor circulation area and access points for the upper seating. Adjacent to this, and overlooking the water, there are three meeting rooms.

With the aid of moveable partitions, all of the meeting rooms can be converted into larger spaces, or even one big meeting room. Walter Watson fabricated a series of bespoke roof beams for this area, with openings to accommodate services and to keep the structural void to a minimum.

Graham Construction started on site during November 2010 and work is scheduled to be completed this coming August.
Commenting on the work, Elliott McKelvie, Chairman of Greenock Arts Guild, said: “When it is finished, the community of Inverclyde will have one of the finest mid-sized arts venues anywhere in the UK. The building will also play an important role as part of the wider regeneration of the area.”