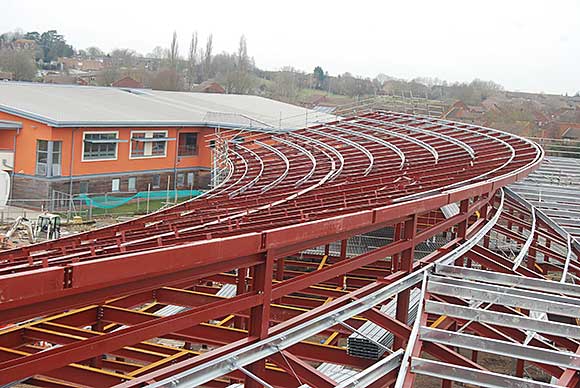 A large sloping curved roof fits into the site’s topography

Medical facilities in the town of Frome are being centralised with the construction of a new eye catching steel framed healthcare facility.

Work to build a new centrally located healthcare facility in Frome, Somerset is progressing on schedule and relying on steel construction to achieve its aspirations.

More than £7M is being spent on a new building located adjacent to the town’s hospital on land formerly occupied by a showground. The structure has been designed with a view of serving 35,000 local patients and the facility is due to open early next year.

The building will rehouse Frome’s existing health centre as well as local general practices currently operating from separate premises. It will also accommodate an operating theatre, opticians, a healthy eating cafe and an education centre.

Local doctors are the client for this project and their brief to the architect was for a structure which would encompass all future needs for a medical centre. Consequently, plenty of space has been designed into the new structure, which consists of two floors and an upper plant level, all housed in a long curved main building that has three attached wings protruding from its back elevation. 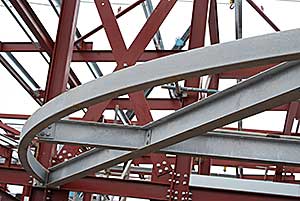 Curved members adorn the rear of each finger block 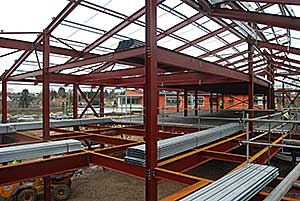 The main curved block has two floors and a plant level

Measuring approximately 100m in length, the main structure’s most prominent feature is its sloping roof, which follows the building’s gentle curvature while tilting gently towards the front.

According to the architect Bundred & Goode, the design also takes its inspiration from the previously sloping site. The curved block and its roof are not just pleasing to the eye, they were also designed to fit into the local environment. The shape of the new health centre complements the adjacent hospital as well as the landscaped plot in which it sits.

More than 15,000m³ of overburden was excavated by main contractor Interserve to create a level footprint for the structure. Cutting into the previously sloping site, the company created a level plot with a curved retaining wall towards the rear of the site, whose shape is mirrored by the structure.

“The curved form of the main building decreases the impact of the main entrance elevation. Also the curved geometry splays the rear medical pods. This increases the opportunity for landscaping between these wings and thus softens and reduces the visual impact of the building from the rear,” explains Bundred & Goode Project Architect Phil Goode.

As the structure has such an architectural shape steelwork was deemed the most appropriate material to frame the building.

“Creating the curve of the building and roof has been largely achieved with the setting out,” explains Jeff Naish, Project Manager of William Haley Engineering. “All of the beams are straight and so each column is off-set by 1mm, with each connection positioned 90 degrees to the rafters.”

The faceted roof, like the entire steel frame, was modelled in Revit and according to Neil Marks, Project Engineer for Clarke Bond, the shape would have been very tricky to design without a 3D model. The modelling of the project also had a collaborative element, with all team members transfering and sharing information.

“We took a BIM (Building Information Management) approach for the design of this project and this saved us a lot of time as everyone from the architect to the M&E contractor and the steelwork contractor all shared the same model and information,” he adds.

The majority of the steelwork – all fabricated and erected by William Haley – is based around a fairly regular grid pattern, incorporating the main building’s curvature, which in turn means all column lines within this sector of the project follow the same off-set pattern. The longest spans are 9m, and these are located in waiting room areas in both the main block and the wings.

Cross bracing, located in lift shafts and in some elevations, provides the structure with its stability. “The structure was always going to be a steel frame, but originally it included concrete lift shafts. These were later omitted for a complete steel frame as this was considered to be more economical,” says Mr Marks.

Working closely with Interserve, all of the steelwork was completed in a six week programme, which also included William Haley landing (positioning) the precast stairs and metal decking.

Prior to steel erection starting on site all of the setting out bases had been positioned and aligned to form the main building’s curve. Once this was complete, the steelwork contractor had most of the structure’s footprint to itself, which allowed work to progress unhindered and quickly.

All of the steel was erected using a combination of cherrypickers and mobile crane. During the early stages of the steel programme, two mobile cranes were utilised, but as the frame neared completion, only one unit was necessary.

When the Frome Medical Practice opens next year the town is guaranteed to have a steel framed structure to be proud of.