50 Years Ago: Steel’s contribution to the Oil and Petro-Chemical Industries

FROM BUILDING WITH STEEL, FEBRUARY 1961

British Petroleum Company’s Grangemouth Oil Refinery in Scotland, as seen at night from the north bank of the Firth of Forth

Steel, in one form or another, is used more extensively than any other metal in practically every branch of the oil and related industries. In fact the phenomenal growth of the oil industry in this century is closely bound up with the use of mild steel in place of cast and wrought iron at the turn of the century. Since then the partnership of steel and oil has never been broken. At every stage of oil recovery, refining and distribution, steel is the metal which predominates. Steel is used in drilling rigs for boring, pumping units for getting crude oil to the surface of the earth, pipelines, land and sea tankers, storage tanks, pressure vessels, refinery units and so on throughout all the scientific ramifications of the industry. In general, wherever the operating conditions do not specifically demand the use of non-ferrous metals, steel is the automatic choice for equipment construction.

Steel is certainly the most spectacular construction material used in the oil industry. In any great refinery hundreds of acres are covered with massive cylindrical steel tanks, all scintillating in the sunlight and creating a powerful impression of strength. Visually and mentally the impact is of a tremendous beauty and significance: these tanks hold many thousands of tons of oil to supply the ravenous power demands of the modern world.

If the tank farms impress the lay observer with their size and acreage, there are many other structures on a refinery which can do the same by their shape or sometimes their sheer complexity. There are distillation units, catalytic crackers, platformers and all the mysterious and fascinating plants which look so formidable and stand up so aggressively. They are all of steel plate and they all use structural steel. From one end of a refinery to the other, steel is the structural medium. The oil industry is one of the largest users of structural steel in the country.

The fluid catalytic hydroformer at Esso refinery, Fawley. This plant was erected at a cost of £4 million to produce high grade quality petrol out of low-octane raw naptha 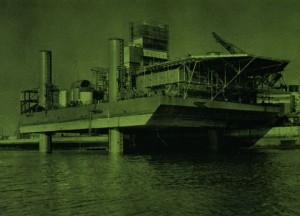 The ‘Orient Explorer’, first British-built mobile drilling platform, now operating off the coast of Borneo. It has living accommodation for 56 men 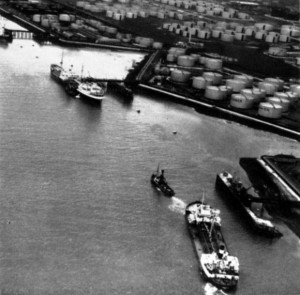 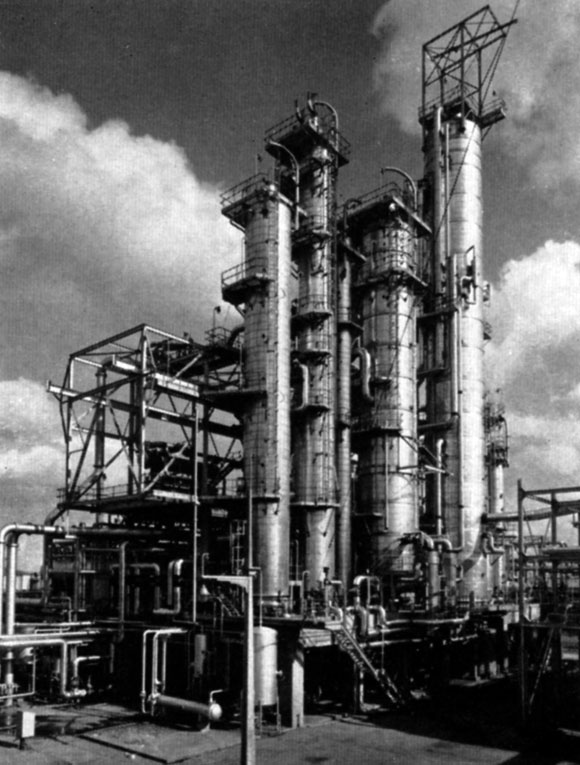 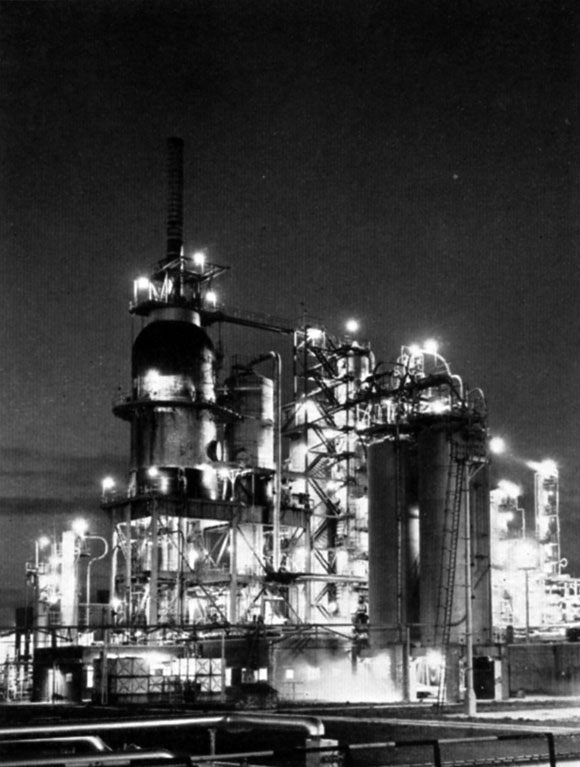 It must be remembered that oil refining and the manufacture of petro-chemicals in Britain are predominantly post-war industries. Indeed, they represent some of the most outstanding technical developments in this country since the war ended. Their growth has been phenomenal. Their importance to our economy is incalculable.

It is gratifying to members of the British Constructional Steelwork industry that they have been able to make a substantial contribution to this great enterprise.

THE ‘MASTER PLAN’ FOR REFINERIES

Before the last war it was the custom for Western European countries to import refined products and although a certain amount of refining was carried out, it was negligible compared to modern operations.

Nor was there any great urge to build up the refining capacity of Western Europe because the general tendency was to refine in the countries of origin. The Anglo-Persian Oil Company, for example, used Abadan in Persia for the bulk of their refining operations – and incidentally, at its operational zenith Abadan was the world’s largest refinery. Venezuelan crude oil was refined at Caracas and of course the USA – which was then by far the largest single producer of crude oil in the world – was well equipped with a network of refineries.

The USA was also a considerable exporter of refined products. Today the position has completely changed and the USA is a net importer of crude oil. The centre of gravity for the oil industry has swung to the Middle East where the great reserves of oil are held: Iraq, Iran, Kuwait, Saudi Arabia and more recently Libya and the Sahara.

DILEMMA OF THE ‘HAVE-NOTS’

A country which lacks natural oil within its own boundaries must either import crude oil ore refined products and is thus placed in a very vulnerable position – particularly since oil is vitally required for a wide and constantly changing range of uses. In war time the situation could be disastrous.

The decision whether to refine in the country of origin or at home cannot have been easy. War-time experience must have been the deciding factor and in 1945 the British oil companies began an enormous plan of domestic refinery expansion which is still continuing. The most recent refinery in Britain to ‘go on stream’ is the Esso Refinery at Milford Haven, opened by the Duke of Edinburgh on November 3rd 1960.

Synthetic rubber was one of the first petro-chemical products. Since its introduction there has been an almost ceaseless flow of new synthetic products and materials based on oil. Petroleum is the source of a vast range of valuable chemicals produced at the rate of several million tons a year.

Plastics, synthetic detergents, solvents, paints and synthetic fibres are some of the more important petro-chemical products. The describe their manufacture here would be impossible and indeed irrelevant. The point to be made is that plants are being erected in this country not only by the oil companies but by the industries interested in the manufacture and use of these products.

The oil companies are extremely active in this field. The Shell company took over Petrochemicals Ltd in 1955. British Hydrocarbon Chemicals Ltd is operated jointly by British Petroleum Co Ltd and the Distillers Co Ltd. Similar companies have come into existence and it is clear that the most important developments in the oil industry will emerge from petro-chemicals.

Looking back is always easier than looking forward and it is interesting to recall the situation which confronted the oil companies when they began their ambitious programme in 1945.

It must be remembered that the USA is the natural home of the oil industry. Oil is indigenous to the country and since the days when Colonel Drake bored his successful well practically every notable development has come from the American oil industry. Oil companies all over the world had therefore always automatically turned to the USA for the equipment they required to find oil or to treat and refine it.

In 1945, however, there were no dollars in Britain to buy that equipment. The oil industry had therefore to turn to the skills of the British engineering industry for help.

It was not a promising situation. The war had not only exhausted the men who had fought in it but also the factories and their plant which had been ceaselessly turning out war material. Both men and machines were run down.

Yet, by one means and another, the work was undertaken and carried out. Companies who knew nothing about equipment for the oil industry – whose standards are extremely high – combined with the few companies with pre-war experience to form the basis of an industry which in its way has grown as large and powerful as the oil industry itself.

Their native skills permitted British companies to manufacture successfully under licence specialised American oil equipment. This is a practice which has grown and today no only can practically all oil equipment be made in this country but the oil companies buy British made equipment as a first choice.

This structural steel industry played its vital part in all this great activity and will continue to do so as long as the oil industry operates. 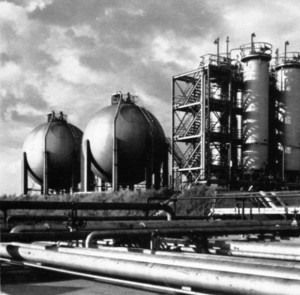 In parenthesis and to illustrate the vastness of the international oil industry – of all the ships sailing the oceans of the world at any time, 11% are oil tankers.