An umbrella for Oxford Circus 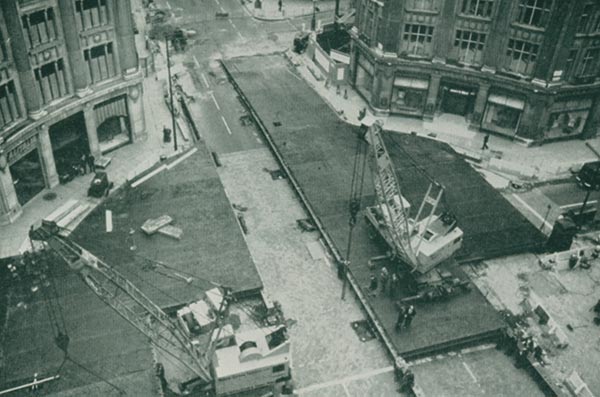 August 4th, 6.50 am; ‘Blue’ and ‘yellow’ gangs work independently on the north and south sides of the site

From Building with Steel November 1963

At 1.30 pm on Saturday August 3rd 1963, Oxford Circus and the surrounding streets were closed to all road traffic and non-residents. They were not opened again until 6.30 am on August 6th. During this brief respite from holiday traffic, 65 hours in all, London Transport Engineers and contractors built an ‘umbrella’ bridge, weighing 850 tons and covering an area of 2,300 square yards. To disrupt West End traffic as little as possible, work had gone on round the clock to a minute-by-minute schedule. The bridge will carry traffic four ways over the Circus while a new upper concourse for Oxford Circus station, part of an extensive programme for the new Victoria Line, is being built beneath it.

The plan for the new Oxford Circus tube station has a large sub-surface ticket hall with a pavement stairwell entrance at the four quadrant. It was decided, therefore to build a steel ‘umbrella’ over the whole of the Circus while work was being carried out and it is expected that this will be a feature of the London scene for the next three years. 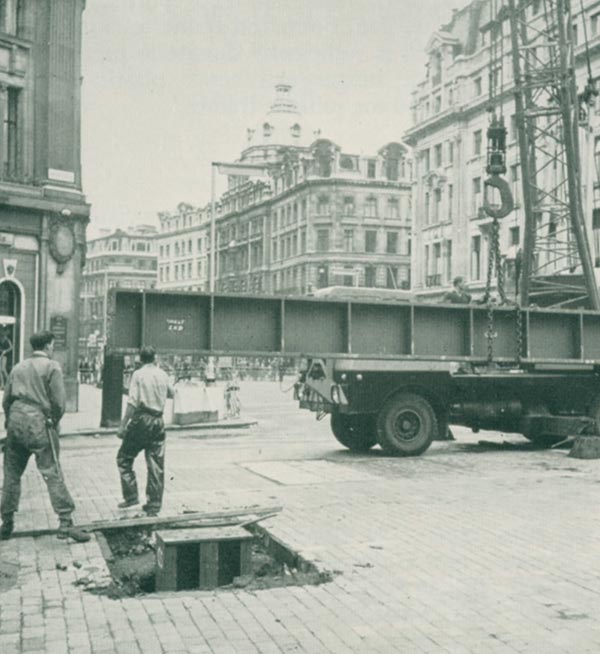 August 3rd, 2.13 pm; Steel stools have been installed on the cylindrical bored pile foundations for installation of the first beams 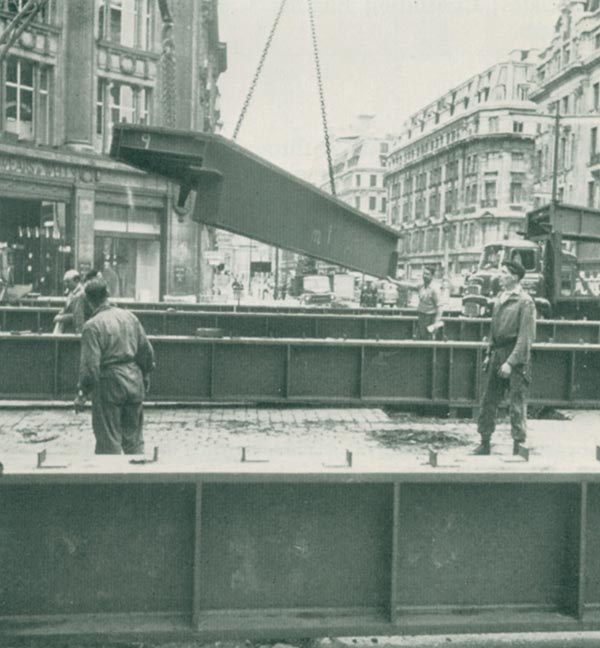 August 3rd, 6.50 pm; Steel deck panels being lowered into place on the main spine beams. Panels were prepared with surfacing before installation 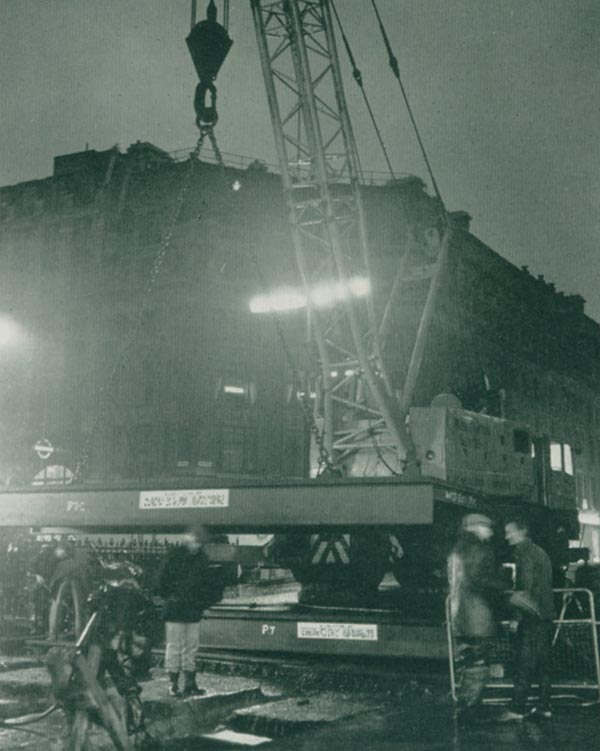 On September 20th, 1962, the first step to implement the decision to build the umbrella was taken and the digging of exploratory pits and headings started a night to discover the exact whereabouts of the pipes and cables carrying the various services beneath the crossroads. This enable accurate positioning of the 24 concrete cylinder foundations auger-bored at 3 ft diameter to carry the bridge. The headings were driven at night after heavy traffic had ceased and the pits were covered in time for the busy morning traffic. Eventually the sewers, main pipes and cables were all surveyed so that the foundations could be sunk to a depth of 54 ft.

The steelwork for the bridge is designed to MOT standard loading, type HA, with some modifications. It consists of 27 main welded girders up to 35 ft in length and 24 tapering lattice truss girders to take the bridge from its full height down to the ramp end panels, bringing the bridge back to normal road level. There are also 197 structural steel panels of battle-deck construction, generally 25 ft by 6 ft and weighing up to 5 tons each. These panels are laid with 1½ in of skid resistant material with half-inch chippings at 1 ton per 100 square yards to form the roadway itself.

In all there were 245 pieces of prefabricated steelwork to be fitted into place and these were bought to London and stacked at the south end of Cavendish Square. During the week-end the sections were brought on site by a shuttle service of low-loader lorries. The timing of the operation was such that the pieces were set in position at the rate of five an hour.

The various sections were coded either yellow or blue and numbered so that they could be handled in the correct order. The work was split into six 12-hour shifts, each shift having about 70 men. The shifts were divided into a north gang and a south gang and to ensure that each gang had a particular responsibility – the north gang handled only yellow sections and the south gang only blue sections.

In readiness for the week-ends work, the cylinder foundations were capped and fitted with holding down bolts and base plates. Foundations were prepared for the ramp truss girders and for the ramp end panels. Hoardings were erected and identity documents prepared to ensure that the police would allow only engineers and workmen into the closed area.

On the night of Friday, August 2nd, part of the hoarding in Cavendish Square was taken down in readiness for the moving of the steelwork. By 1.30pm on Saturday all the diversion notices had been posted and the Circus was deserted except for the workmen. The granite kerbs were removed from the Circus and stacked in Regent Street, and the prepared foundations cleaned out. Steel stools were erected on top of the cylinder foundations and the two erector gangs, north and south, began to erect the steelwork in the prearranged colour and number order. Beams, trusses, panels and ramp units followed one another to the site and were lifted by road mobile cranes and lowered into place.

The bridge was due for completion by noon on Monday, August 5th and was actually completed by 12.15pm. By the late afternoon, traffic lights were being fixed on the ‘umbrella’ deck, traffic stop lines were being marked and the granite kerbs previously removed were being replaced, this time on the ‘umbrella’ deck. By 6.30pm on Tuesday the timber pavement decking on the south end of the hoarding at Regent Street (north) was completed, barriers had been moved and the police allowed the early morning traffic to move into Office Circus and over the bridge.

The bridge gives a full width road from Regent Street (south) and from Oxford Street (east to west). The ramp from the north of Regent Street is to the west only, the east side being closed. This will be used as the working site for the new station.

The bridge was designed under the direction of London Transport with Sir William Halcrow and Partners as consulting engineers. 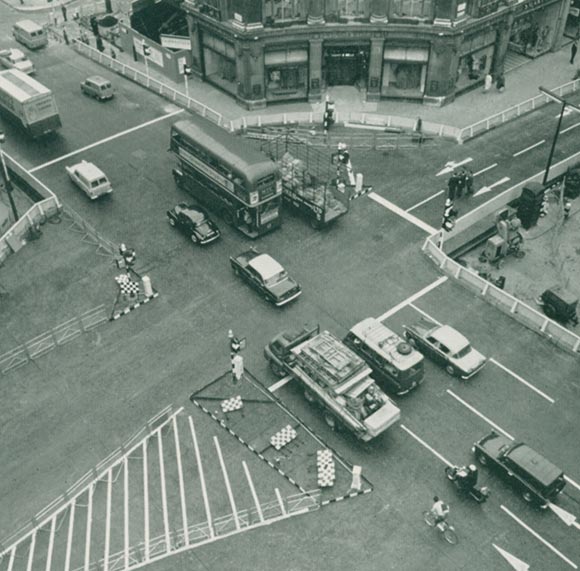 Traffic was allowed to move over the ‘umbrella’ early on Tuesday morning, only
65 hours after the whole operation started