A centre for technological excellence 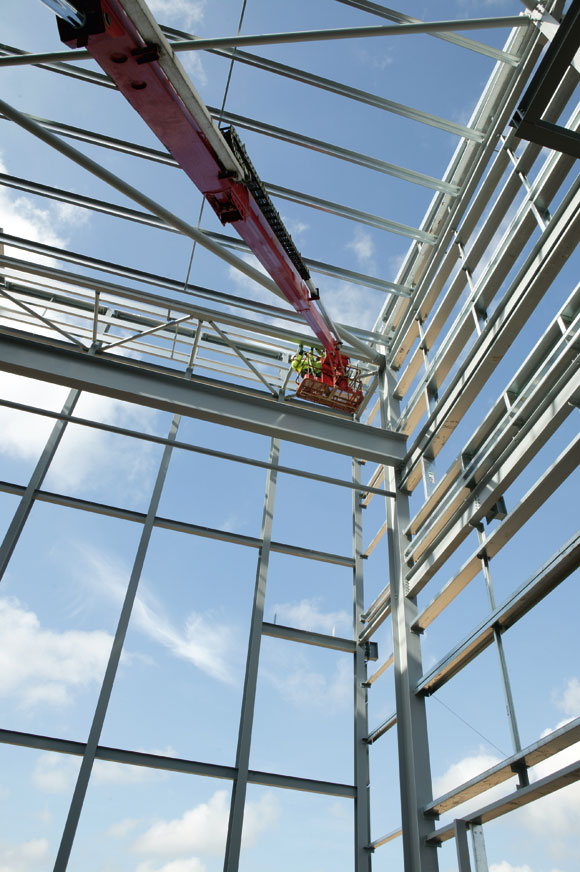 Steelwork is playing a key role in the construction of the UK’s first manufacturing technology centre which is taking shape on the outskirts of Coventry. Martin Cooper reports.

With backing from some of the UK’s leading manufacturers as well as top research and academic institutions, the Manufacturing Technology Centre (MTC) will be a unique facility helping to ensure innovation stays at the forefront of British industry.

Located at Ansty Park near Coventry, the MTC will support UK manufacturing businesses and their supply chains, to bring about major improvements in their manufacturing competitiveness. The Centre will also offer, for the first time, a bridge between academic research and commercial production, delivering tried and tested production ready solutions direct to industry.

Research will primarily focus on assembly, fabrication and joining technologies including high integrity fabrication, advanced tooling and fixturing, as well as intelligent automation. All of this work will be backed up by research into modelling and simulation.

Jerry Finch, Morgan Sindall Project Manager says: “In order to carry out this full scale research and development, a suitable structure was needed, one in which production lines and even aircraft wings could be produced in their entirety.”

To this end the MTC building features three large open plan halls positioned side by side. The two outer halls have spans of 27.5m, 22.5m, while the central hall is a double span frame with a 41m span. These large portal frames will house the production areas and the steelwork for each hall also has to support a large overhead crane. Crane beams, running along the top elevation of each hall, have plates welded to the top flange to assist buckling resistance. 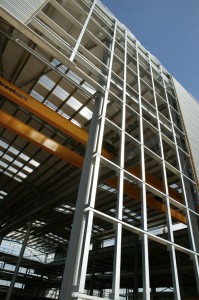 The supporting columns for the portal framed halls are spaced at 12m centres, and this large spacing coupled with the fact that the supported overhead cranes have capacities of up to 15t, led to larger than normal steel sections being used.

Separating the production halls are internal two-storey office structures. However, these areas actually begin at first floor level, allowing the entire MTC to have an open plan ground floor running right through the structure.

These two storey structures also had a bearing on why large 610 × 305 column sections were used. “The portal columns are not restrained along the internal elevations until the underside of the two-storey structure,” explains Caunton Engineering Structural Engineer, Gavin Christie. “This was another reason why we needed large section sizes – to resist buckling of the columns.”

The two-storey elements within the MTC are roughly horseshoe-shaped, running along the two inside elevations of the central hall, and then along a third elevation which is within a ‘Street’ sector which link the halls together, and also contains the main entrance hall and exhibition space.

As well as offices the two-storey elements will also contain technical areas such as an electronic fabrication shop along with viewing galleries overlooking the production areas. These will allow students and members of the public to see into the MTC production areas and observe the ground-breaking research development as it happens.

Connecting to the two-storey elements are a couple of mezzanine areas for plant, one of which cantilevers out by approximately 2.5m along the elevation which separates the MTC halls from the ‘Street’.

Size-wise the MTC is very spacious, each of the three halls covers an area of at least one football pitch. However, flexibility played a key role in the early design of the structure and the possibility of enlarging the MTC was an important criteria.

“A number of material options were considered during the early design stages,” explains Phil Spiers, Waterman Project Engineer. “A steel frame was chosen not just for its ease of construction, but also because of the ease with which services could be moved, to meet the client brief for flexibility of space, as well as the anticipated changing needs of the landlord and manufacturing tenants. This would also permit a substantial future extension to be added.”

The steel frame, which was designed by Caunton Engineering under a design and build contract, has been consequently constructed to accept an extension to its eastern elevation, a structural extension which could be large enough to increase the overall footprint of the MTC by up to 25%.

With the need for large open plan areas and no cores with which to tie-into, where and how to stabilise the structure was an important issue. To this end, the MTC uses a combination of vertical bracing and portal action – mostly in staircases – to get its overall stability.

As of the end of October, Caunton had erected the majority of the steelwork with the exception of the ‘Street’ area. Using mobile cranes for all erection duties, the most challenging aspect as far as the company’s on site team are concerned was the size of the purlins. With such large portal frames, each 12m bay required one 12m long purlin, weighing nearly one tonne. These large sections added to the steel programme, as each purlin required an individual crane lift.

The steel programme has been scheduled around other trades and the ‘Street’ could not be completed until internal cladding along the front elevation had been finished. 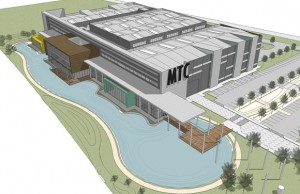 The front of the completed MTC will feature an ornamental lake

The ‘Street’ essentially ties the front elevation to the rest of the building. Bolted onto the front of the structure, the 9m-high frame is constructed from oval Celsius columns and a conventional steelwork canopy roof. The entire frontage will be glazed, adding an architectural finish to the building’s front elevation. Either side of a two-storey sector located in the middle of the ‘Street’ (one part of the horseshoe structure that separates the three halls), this zone contains the main entrance and reception along with a number of exhibition areas, which will show some of the work that has been undertaken.

The reasons behind the choice of eye-catching oval sections was twofold, one for their aesthetic appeal and secondly for their aeronautical connections (the shape is supposed to conjure up images of aeroplanes) in honour of some of the MTC members.

The oval 500 × 250 sections are restrained by bracing hidden under the soffit, which allows the columns to keep their aesthetic appeal. Similarly the ovals are connected to the base and rafters by an exposed feature pin connection. Adding to the overall aesthetic look, the glazing will be positioned inside the column line, again not to interfere with the exposed oval columns. The canopy’s purlins are also larger than normal, coming in at 2.5m thick, as exhibits will be hung from them.

The MTC is scheduled to open during the summer of 2011 and according to Peter Flinn, Interim Director of the MTC, research has already started with 15 to 20 programmes already lined up to occupy space at the Centre. 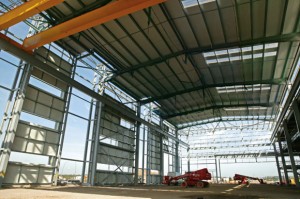 Founder members of MTC Ltd are: