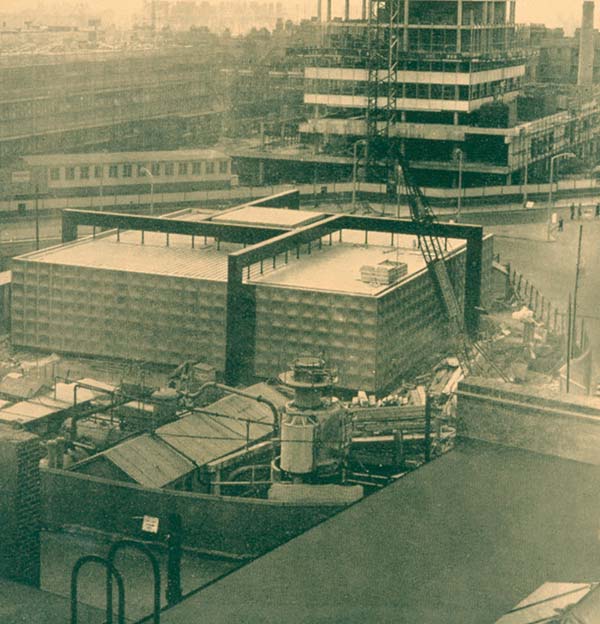 The comprehensive redevelopment of the Elephant and Castle is a part of the London County Council’s plan for the County. Very broadly, the redevelopment consists of the reorganisation of the traffic at the junctions at six major roads and the development of seven sites – the whole area totalling about 31 acres.

The new road layout is in essence conceived as a major roundabout and a minor roundabout connected by a link road on the line of Newington Butts. The major roundabout is at the junctions of the five roads and is in the form of a pentagon. The new L.T.E. Sub-Station is on this roundabout and it replaces the existing sub-station which is being demolished to facilitate the redevelopment of the area.

It has been proposed that the new sub-station should be a memorial to Michael Faraday, who was born just up the road at Newington in Southwark in 1791. Faraday was one of the outstanding physicists and innovators of the nineteenth century, responsible for many ideas, including the theory of electro-magnetic induction, a theory which has a direct bearing on the function of this building.

This imaginative proposal was matched by a highly original architectural conception. This conception, of a composite glass and steel prismatic vertical enclosing and supporting structure with a steel space frame roof in the form of an inverted pyramid, unfortunately had to be abandoned. The architect’s final design, which is now being constructed, features an all-welded  structural steel framework wholly outside the building. The geometry of the main frames, from which are suspended the secondary steel frames supporting the roof, is perhaps unusual in that the horizontal members form a partially truncated orthogrid. These members are mutually self supporting internally and externally they are continuous with the four main stanchions. The overall span of the main frame is 87 ft. 3 in and it is approximately 25 ft. high. 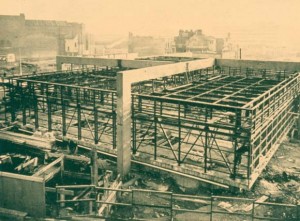 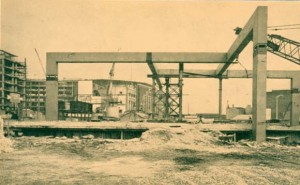 Because of the spatial arrangement of the structure and the eccentric nature of the supporting system there is a tendency for it to rotate in a horizontal plane about its centroid. The rotation gives rise to torsion in the main members which therefore must be given an appropriate and suitable shape. This leads to the use of the box section which not only has high torsional rigidity but also fits in with the architectural scheme.

The box sections for the main frames were all welded from mild steel plates which varied from ½ in to 1 in as the stress conditions demanded with constant overall dimensions of 36 in deep by 21 in wide. The maximum weight of unit fabricated in the shops was 8.0 tons. The main erection was carried out with a mobile crane with a capacity of 10 tons at 30 ft radius.

All site joints were welded and they were examined during the process of construction by means of either gamma ray or ultrasonic testing techniques.

A close watch by means of spot check radiography was also kept during fabrication.

The external cladding of the building consists of 2 ft. square dished stainless steel panels. There is also an internal cladding skin of expanded polystyrene panels faced with aluminium sheeting and plywood.