AD 292: The Use of Discontinuous Columns and Shallow Deck Composite Slabs on Floor Beams

Posted on October 1, 2005 by NSC2 in Advisory Desk, Technical 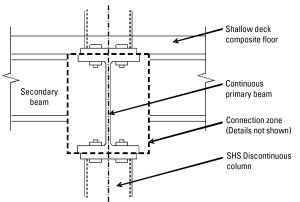 Since the publication of the AD series on discontinuous columns and continuous beams in simple construction (AD281, AD283, AD285 and AD288) with Slimflor or Slimdek construction, our attention has been drawn to their possible use with a shallow composite floor slab on the top flange of the beams. We considered this possibility when writing the above series and rejected it at that time because of the difficulties associated with designing the connection zone which is illustrated in Figure 1. Our advice in AD 285 explicitly limits the use of the system to where the floor plate is contained within the depth of an ASB beam and this advice remains current.  The following comments explain some of the problems and the reasons for our advice.

With shallow composite floor construction, modern steelwork practice often uses large openings in the webs of composite beams to achieve service integration and make the overall depth of floor construction shallower. Making the primary beam continuous over (or through) the column would reduce the overall depth of construction further (because shallower beams can be used) and also allows the use of SHS discontinuous columns with simple end plate details. This would make the overall structural package very attractive for larger residential and commercial developments. However, as the discontinuous column form of construction is a recent development it was not considered in the design of whole buildings by the BS 5950 code committee. BS 5950-1 only makes reference to the design of cap plates (where the cap plate on the column supports a beam end). There is insufficient material in BS 5950-1: 2000 to cover all of the complexities that arise with this type of design concept when a shallow deck composite slab is placed on the top flange of the continuous beams, particularly on deep beam sections. 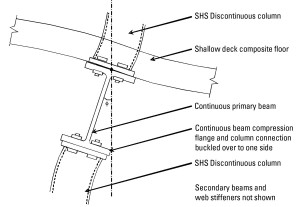 A major concern when discontinuous columns are used with downstand beams is that the beam-column connection to the bottom flange of the primary beam (which is in compression in the hogging moment region) is not restrained laterally (unlike with Slimfor and Slimdek construction) and will buckle, as shown in Figure 2. The compression in the flange is a de-stabilizing effect in addition to that arising from the discontinuity of the column. BS 5950-1: 2000 has provision for the column effects alone; clause 4.5.3.3 requires that ‘If the load or reaction is applied to the flange by a compression member, then unless effective lateral restraint is provided at that point, the stiffener(s) should be designed as part of the compression member applying the load, and the connection should be checked for the effects of strut action, see C.3.’ In addition, clause 6.1.8.2 requires that the ‘intended’ member stiffness about each axis be maintained at the connection. However, the Code does not contain provisions for dealing with the combined effects due to the column discontinuity and the compression in the beam flange. Furthermore, the column will be required to sustain biaxial bending.

It is the SCI’s advice at this time that shallow deck composite floor slabs placed on the top flange of the beams should not be combined with discontinuous columns and continuous beams, unless there is a detailed calculation of the instability problems arising.

When the floor plate is placed within the depth of an ASB beam, it prevents out of plane buckling of the discontinuous column ends and avoids the need for a distortional buckling check of the primary beam in the hogging moment region. Moreover, the thick flanges of the ASB beams make the beam-column connection design, including the structural integrity checks on the column, easier to achieve.