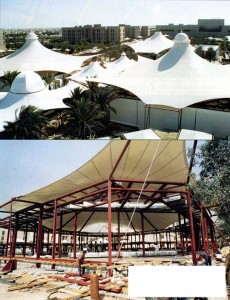 Cover images from Steel Construction, February 1992, of (top) the finished conference centre, and (above) the centre under construction

On the 16th December 1991, under the lavish splendour of five steel framed structures, designed in the bedouin style by Architect John Rowe Parr, and fabricated by Robinson Construction of Derby, the Heads of State of six Arab nations gathered at Bayan Palace, Kuwait, to discuss the rebuilding of the war-torn city, under the mantle of the Gulf Co-operation Council.

The conference centre, believed to be the first structural steel contract to be awarded since the end of the Gulf war, comprised of a main entrance dome, conference theatre, main and central lobbies and a banqueting suite. The banqueting structure, seating 250 people, is reported to be the largest single span tented structure without a central support.

Due to the sensitive nature of such a gathering, complete secrecy surrounded the conference from conception through to its closure.

On the 3rd September 1991 John Robinson, Managing Director of Robinson Construction returned to Derby with an order from management contractors, Stirling Management, to draught, fabricate and erect over 147 tonnes of complex tubular structural steel.

Mobilisation was swift and precise, a plan of campaign established and management designated to their respective tasks. Over the following weeks John spent the majority of his time commuting between London Consultants ‘atelier one’ and the Derby fabrication plant, extracting the information necessary to perform such a herculean task. Draughting commenced almost immediately, by the 25th September, a convoy of Robinson Construction fully laden trailers left Wincanton Close – destination Heathrow Airport. Twelve hours later an Air France 747 Cargo Freighter, its contents over 140 tonnes of fabricated steel, took off for Kuwait. 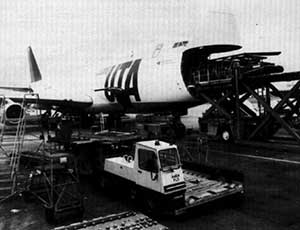 The following day at Kuwait Airport, Eddie Major, site engineer for Robinson Construction, along with three other erectors supervised the off-loading and transportation to site. The task which lay ahead for Eddie and his crew could not have been more physical.

Relentlessly the team worked solidly for four weeks, erecting the structures under extreme and arduous conditions, which included basic shortages such and water and food supplies, communications and support plant, all this compounded with the continuous cloud of smog produced from the still raging oil fields.

By 26th October when John Robinson arrived on site for the completion of the final phase, over 160 tonnes had already been erected. When, on 5th November 1991 hand over was completed for the project with three days to spare, Robinson Construction were satisfied in the knowledge that the magnificent structures had been manufactured and erected with 100% accuracy. 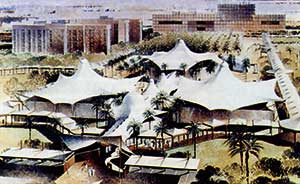 Impression of the finished conference centre