50 Years Ago: Building a new factory over an existing one 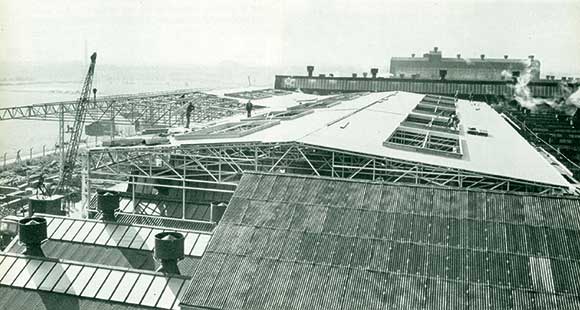 From Building With Steel, February 1962

A new factory storehouse, intended to replace a smaller building, was partially erected over the existing building while it was still in use.

This unusual example of the flexible design possibilities of structural steelwork came about when Pirelli Limited decided to build a new tyre store at their Burton-on-Trent factory to replace the existing store, which was inadequate in area and lacking in headroom.

When Pirelli approached their consultants for advice on the structural planning of their new store, they pointed out various problems, e.g. the new store had to be in roughly the same position as the existing building and it could not encroach upon a nearby playing field.

It soon became apparent that the only solution was the build the new store wholly or partly over the existing building while the latter was in use and to demolish the smaller store afterwards. The proposition was perfectly practicable because the level of the new tie line was to be 24 ft., well clear of the existing ridge so that fork lifts could be used for handling tyres.

The final scheme comprised an area of 246 ft. × 164 ft. The 164-ft. length was divided into two spans of 82 ft., one of which (i.e. exactly half the job) was erected over the existing store while the other span formed an addition to the total covered area of the factory, built out over the existing access road.

This scheme required a row of columns to be erected within the existing premises, 82 ft. from the gable wall, projecting through the old roof. The column centres in line were 41 ft. apart. A temporary platform was built on top of the old roof, and 41-ft. span lattice girders were taken, piece-small, along the platform to the inner column line and assembled and erected there. After the corresponding line of lattice girders along the old gable had been erected, a mobile crane put up the secondary lattice girders spanning the 82 ft. over the existing building.

The remainder of the steel erection presented no unusual difficulties and was completed in the normal way.

The weight of steelwork was 149 tons, i.e. approximately 8 lb. per sq. ft. of area covered. The roof covering was a metal decking and the sides were clad in coloured protected metal sheeting.

The project as a whole, including clearing away the old fabric underneath, took seven months to complete. The new store, of lattice girder construction, covers 40,000 sq. ft. Fifty per cent of this was erected over the top of an existing North light building before the latter could be dispensed with and demolished. This could only have been done rapidly and economically  with structural steelwork of this type.