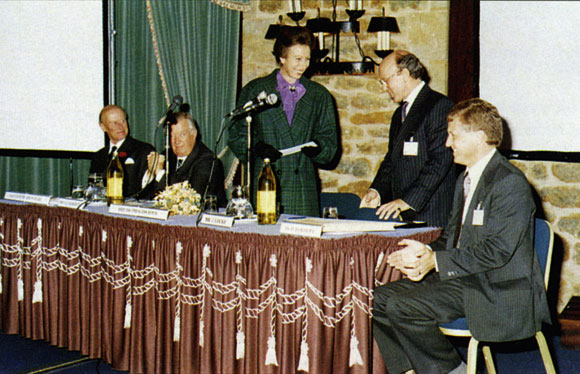 On Monday 18 September 1989 Her Royal Highness The Princess Royal opened the week-long Congress of the European Convention for Constructional Steelwork at Stratford-upon-Avon. During the week, 500 delegates from 25 countries took part in the International Symposium, Committee Meetings and ECCS Annual Meetings.

In her opening address, Her Royal Highness stated:

“This year sees the centenary of the construction of the Eiffel Tower and 1989 has been appropriately designated the ‘European Year of Steel Construction’.

The past century has seen many exciting steel structures built throughout the world both for the convenience of mankind, in the form of hospitals, schools, power stations, factories, offices, bridges etc, and the enjoyment of mankind in the form of shops, theatres and leisure centres.

The quality, speed, flexibility and reliability of steel framed structures has put steel in the position of the leading construction medium in the United Kingdom; this congress and the future research of the ECCS Technical Committee will be a step towards establishing steel in that position world-wide.”