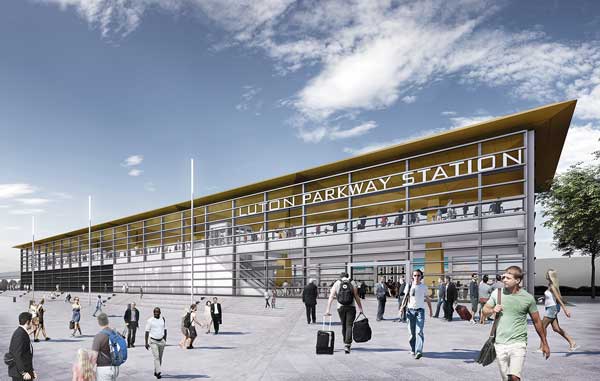 Steelwork erection has commenced for a new viaduct that forms an integral part of the £225M Luton fast transit system, which will link London Luton Airport with Luton Parkway railway station.

The fully automated and driverless transit system will be approximately 2.1km in length and will provide a journey time between the station and airport terminal of less than 5 minutes.

From a new dedicated station adjacent to Luton Parkway, the system will be elevated on the viaduct until it reaches the A1081 where it will cross via a new bridge.

Beyond the bridge, the route will be at ground level or in a shallow cutting, before finally entering a tunnel under the airport taxiway.

Working on behalf of main contractor VolkerFitzpatrick-Kier joint venture, Severfield is fabricating, supplying and erecting 830t of steelwork for the eight-span viaduct.

In cross section the structure is three plate girders wide at the station end, but it then tapers down, between piers two and three, to only two girders wide. Overall it consists of 25 main longitudinal plate girders, which have a maximum length of 42m and weigh up to 36t each.

As well as the viaduct, which is expected to be fully erected by November, Severfield is also supplying the steelwork for the system’s two stations.