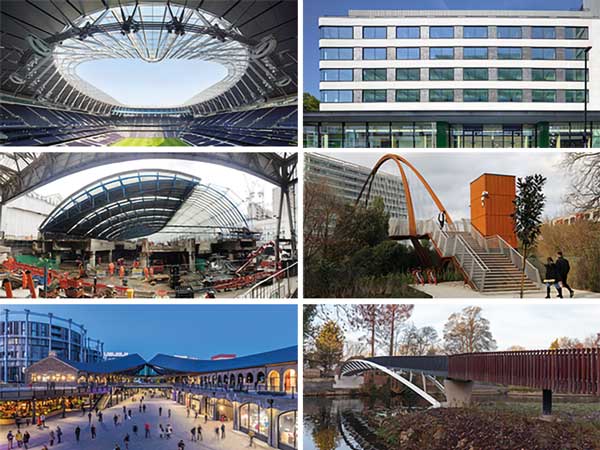 Featuring projects from around the world, the Awards are divided into 12 categories and the winners will be announced at a London evening event on 15 November.

The new Tottenham Hotspur Stadium (top left) is one of four projects on the Long Span Structures category, awarded for structural engineering excellence in buildings or stadia [not bridges] incorporating long spans.

Working on behalf of main contractor Mace, Severfield erected the steelwork for Spurs’ new home, which opened earlier this year.

Linking a west London business park to a local underground station, Severfield was the steelwork contractor for the three-span Chiswick bridge, while S H Structures provided the steel for the latest Thames crossing at Taplow.

Bourne Steel was the steelwork contractor for both the redevelopment of 160 Old Street in London, which saw a 1970s structure converted into a modern commercial premises, and the Waterloo Station job, where the company’s work included a new roof spanning between the Victorian Station and former Eurostar building.

Severfield were the steelwork contractor for Coal Drops Yard, the company’s third shortlisted project. This scheme includes a bespoke curving steel roof that spans between two restored buildings to provide a new retail centre with its crowning glory.