All change at Waterloo 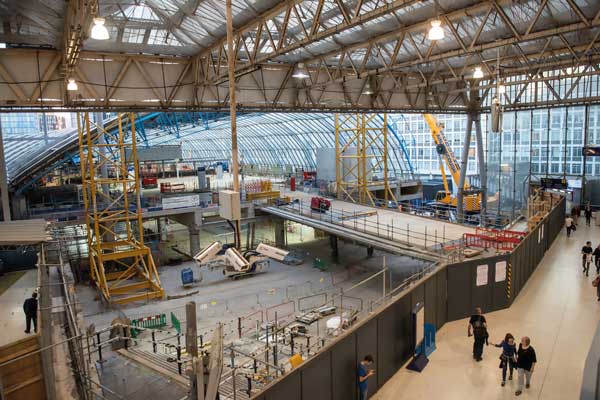 Work gets under way on the new roof structure

Part of the project to revamp the former Eurostar terminal at Waterloo station, a roof structure, requiring a high degree of complex design work, will bridge the gap between two existing structures to form a new covered concourse.

Disused since London’s Eurostar terminus was moved to St Pancras International in 2007, the structure is in the midst of a major refurbishment, which includes preparing the five platforms to increase the number of train services into Waterloo.

A two-storey shopping and leisure complex will be situated in the former Eurostar arrivals and departure lounges, beneath the platforms.

Improving access around the Waterloo station concourse is also ongoing and this work includes the construction of a steel roof that will infill a gap between the original Victorian-built Waterloo station canopy and the adjacent curved and glazed roof of the WIT structure.

“Previously there was no need for this infill roof as passengers would have entered the Eurostar terminal at a lower level and a now dismantled canopy sheltered them,” explains Wessex Capacity Alliance Engineering Manager, Chris Kitching. 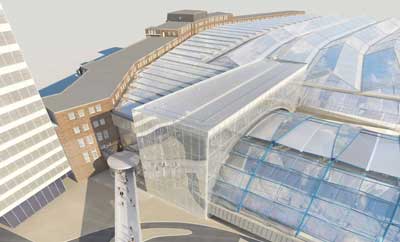 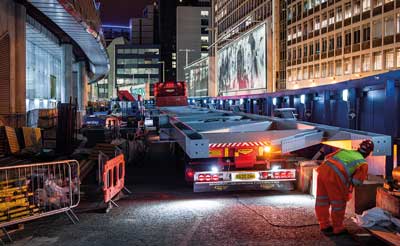 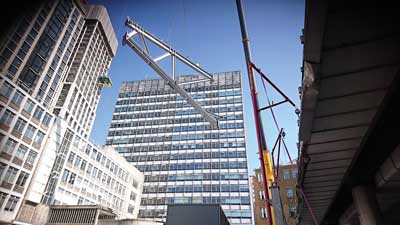 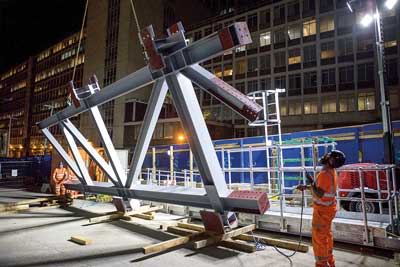 A truss is made ready for erection 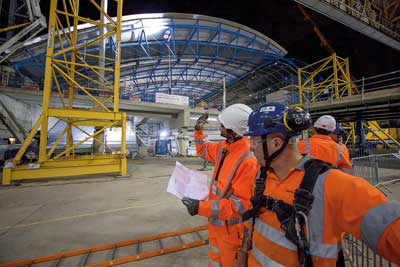 A temporary support tower is installed

“We have now installed a new composite steel bridge, which will allow passengers to access the revamped terminal at platform level and so a new high-level infill roof is needed.”

Bourne Steel Divisional Manager Andy Davies adds: “In simple terms, the infill roof is a rectangular steel-framed box, tapered along one side to accommodate the shape of the WIT structure and over-sailing the two station roofs.”

The eastern gable is supported on Waterloo’s 1840s-built masonry walls, but apart from this, the new structure is completely self-supporting. It sits within millimetres of both the WIT roof and the adjacent 19th Century-built Waterloo roof, but never touches either.

A steel-framed solution was the only viable design for the project as a lightweight structure was needed because no foundations could be installed to support it. Piling the site was impossible as a number of tunnels as well as Waterloo station’s underground ticket hall sit beneath the site.

“The entire roof structure including glazing is only 400t,” says Mr Kitching. “But however light this may be, we still needed to work out where the loads could be transferred to and if we could free-up any capacity from the existing structures.”

The solution involved some nifty juggling of loads and required the buffer stops in the WIT structure to be moved 50m down line. This was feasible as domestic trains are not as long as Eurostar trains. So, by moving any potential train impact away from the new roof, nearly enough load capacity was found for the new structure.

Nearly being the operative word, as the roof still needs two 508mm-diameter circular hollow section (CHS) columns to support it in the middle.

The vistas which Network Rail is keen to preserve are the views of the Grimshaw-designed WIT arches seen when entering the former Eurostar terminal, and the listed Waterloo station Victory Arch and Stairs viewed when leaving the same platforms.

As well as providing additional support to the roof, the CHS columns allow the structure to have a central area with a 26m clear span. However, as no foundations can be installed, the CHS members are founded directly on top of the WIT platform slab.

Because of the WIT’s propped cantilever design the slab is subject to movement of up to 100mm +/-, and so the columns are placed on bearings to allow for any potential shift, which would otherwise crack the new roof’s glazing.

Forming the main span of the roof is a 52m-long spine truss, which is 4.2m-deep and weighs 27t. It was brought to site in three sections, with the longest element, which spans between the CHS columns, weighing 13.5t.

The central spine truss supports a series of eight pairs of gullwing trusses that sit perpendicular to the main structure and form overhangs on either side. Each wing measures approximately 8.3m-long x 4.0m-deep.

Steelwork for the project has all been erected by a 300t-capacity mobile crane positioned towards the northern end of the site. The working area for the project is extremely tight, squeezed in between a ‘live’ functioning railway station and office buildings. Finding a suitable location for the crane was not only determined by space constraints, but also by what is underneath the site.

It had to be positioned to one side of the new structure, away from any subterranean facilities. This position meant a larger capacity unit with a longer reach was required; one much bigger than would ordinarily be needed.

Keeping the frame stable during erection was one of the main challenges for steelwork contractor Bourne Steel. Due to the confined nature of the site, the structure was erected on substantial temporary works comprising two towers over 20m in height, a ‘planar’ trestle and a temporary lattice girder spanning approximately 25m between the towers.

The temporary works enabled sequential erection from east to west and the installation of the gullwing trusses and roof steelwork without the spine truss being fully complete. The temporary towers and truss also allowed the wing trusses to be set at the correct level before de-propping, when the building load is then transferred to the feature columns.

This was exacting work as Mr Davies explains: “Each gullwing truss had to be in an exact pre-set position before the frame was de-propped and the glazing was installed, so they needed to be individually surveyed, checked and then released by our designers before the erection sequence could continue.”

The new roof is due to complete by early 2019, while the ongoing works on the former Eurostar terminal will continue into 2019.