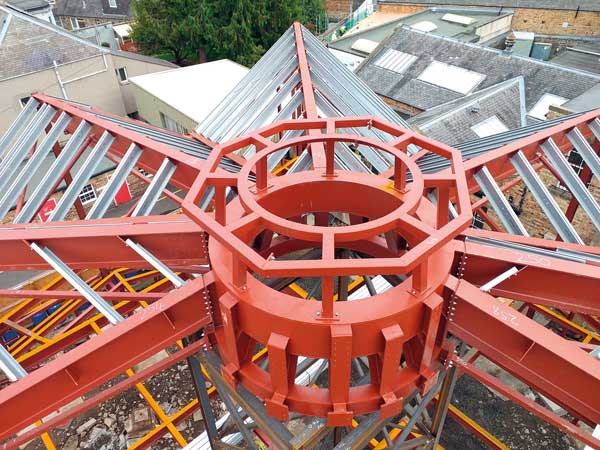 The origami-style roof radiates out from a central ring beam

An irregular-shaped building with a folding origami-style roof is being built to house the Great Tapestry of Scotland. Martin Cooper reports on a project which will bring socio and economic benefits to Galashiels.

The Great Tapestry of Scotland is a 143m-long linear pictorial history, depicting keys events north of the border going back 12,000 years.

Carefully embroidered by the hands of over 1,000 stitchers, the tapestry is not a continuous item, but separated into numerous panels, which will allow it to be exhibited in a radial arrangement within the new building.

Explaining how this work of art forms part of Galashiels’ regeneration masterplan, Alistair Moffat of the Tapestry Trustees says: “The Great Tapestry of Scotland is an object not only of great beauty and power, it will also act as an engine for renewal.

“As large-scale retail moves to the periphery of towns and cities, it is magnetic cultural attractions like the Tapestry that will bring back life to town centres.

“The huge success of the V&A in Dundee, attracting 500,000 visitors in six months, doubling estimates, is only the latest example of how well this strategy works.” 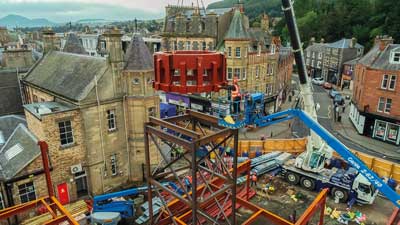 The new building sits on vacant plot in the town centre next to the old post office, which recently closed down and moved further up the main street. The two-storey post office building is being renovated as part of the project, as it will be linked to the new structure and will house an education room on the ground floor with offices, meeting rooms and a staff canteen on the upper level.

Behind the old post office building, there is still a functioning sorting office, to which main contractor Ogilvie Construction is adding an extension as another part of its overall programme.

Renovations and extensions apart, the main part of the scheme is the construction of the home for the tapestry. This is a two-storey steel braced frame, which is roughly a square-shaped building measuring 40m x 40m. Two elevations face on to streets, and these have slight folds and bends, breaking up the solid mass of the walls and adding some architectural interest.

The design needed to create enough wall space, within a relatively restricted town centre site, to display this extraordinarily long artwork. To do this, the design incorporates walls that bend and fold and thereby provide as much surface area as possible.

Because of this, the columns for the structure are spaced irregularly around the perimeter, while internally, the layout has been designed to have as few interior columns as possible.

The ground floor will house the main entrance foyer and a café/wine bar, while the upper floor will be dedicated to exhibiting the tapestry.

The decision to use steelwork for the building was taken quite early in the design process and the material was primarily chosen for its spanning qualities.

Page\Park Architects’ Suzy O’Leary says: “The tapestry gallery is a single space, approximately 635m², and occupies the whole of the first floor. We did not want any columns intruding into the space, so a steel structure allowed us to create the clear span.”

The building is topped with a complex origami-style curving and folding roof, which is a key feature in the overall architectural design.

“The steel structure made this complicated design achievable. It gave us the flexibility to design the roof exactly the way we wanted it, without limitations on the overall form,” adds Ms O’Leary.

The steel erection programme required the central element of the roof to be one of the initial parts to be installed. A large 3.7m-diameter ring beam, weighing 5.2t, was lifted into place and held up by a temporary support.

Once this fully welded ring beam had been surveyed and adjudged to be in it is correct position, all of the roof rafters, which radiate out from this central element, were incrementally installed with bolted connections, along with their supporting columns. To create the folding style of the roof, each of the rafters, which are up to 17.5m-long, are positioned at varying pitches.

Only after the entire steel frame was completed and the structure was deemed to be stable, could steelwork contractor Hescott Engineering remove the ring beam’s temporary support.

The design for the Tapestry Gallery and in particular the roof, was inspired by Galashiels. The town sits within a valley framed by the Eildon Hills. If driving, you approach the town from above and your first view is out over the rooftops.

The town centre is a conservation area with a largely Victorian building stock. The roofscape of this historic centre can be characterised by pitched roofs, dormers, gables and turrets occasionally pierced by the tall spire of a church. The architects looked to design a folded roof to sit within the context of the historic folding roofscape.

“We feel, by acknowledging and interpreting the historic context, our distinctly contemporary design can sit comfortably within the conservation area,” adds Ms O’Leary.

The resultant shape of the building and its roof creates pockets of external space. According to the design team, this generosity with space within the public realm will encourage people to stop and linger a bit longer and enjoy all the town has to offer. Thereby, bringing some extra vibrancy back into the town centre.

The Great Tapestry of Scotland is due to be open to the public by Summer 2020.