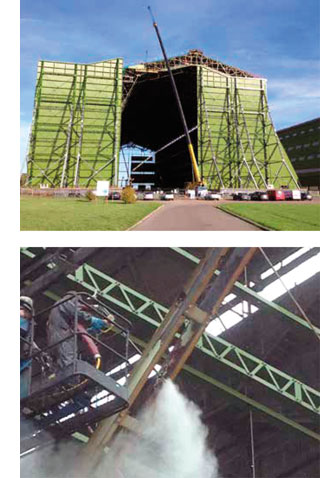 Paint supplied by Hempel has been used for the restoration of a historic hangar once used to house airships at RAF Cardington in Bedfordshire.

The structure is one of only three hangars in the UK to have survived from the period up to 1918. It was originally built in 1907 by AJ Mann and Company of Glasgow for the Admiralty.

Since the days of airships the hangar has subsequently had many uses and it is now a National Heritage listed building.

Having been identified as being in need of restoration a major project on the iron and steel-framed structure has been carried out. Many of the original steel members had to be replaced and the entire structure was repainted using Hempel’s products.

The specification for both the external and internal steelwork called for oil and grease to be removed by emulsion cleaning, followed by high-pressure fresh  water washing.

For the exposed external supporting members, two  coats of Hempel’s Hempadur 45143, a self-priming, two pack, polyamide cured-epoxy were applied at 75 micron each, followed by a 50 micron glossy topcoat of Hempathane 55210.