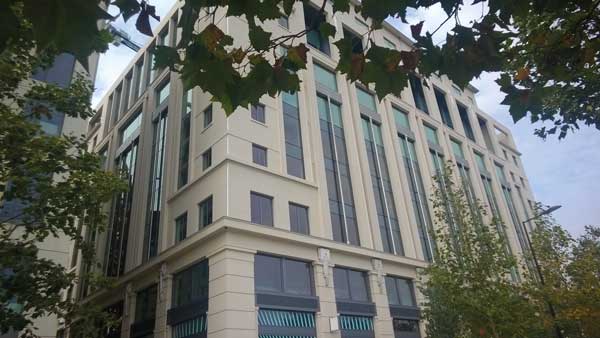 The penultimate building on the prestigious Pancras Square scheme, which forms an integral part of the Kings Cross development in north London, has been completed.

One of four buildings around the scheme to feature steelwork elements, Three Pancras Square is an 11-storey 15,230m² building offering office floorplates of 1,700m² over the 10 upper levels, while the ground floor houses a double-height reception area.

Sitting atop a two-level reinforced concrete basement that connects into a shared podium, the building measures approximately 58m × 36m and 46m high to fit into the overall height scheme of the Square.

Fabsec cellular beams have been used throughout the project and span up to 13.5m, creating a near column-free internal space on every office floor.

Working on behalf of main contractor BAM Construction, Severfield fabricated, supplied and erected 1,900t of structural steelwork for the project.

Next door, the same construction team members are currently building Four Pancras Square which features a steel exoskeleton. It will be the final building on Pancras Square and is due to be completed early next year.

Described as a new piece of London and boasting a brand new postcode – London N1C – the development will eventually include 50 new buildings, 2,000 new homes, 20 new streets and 10 new public squares spread over 67 acres.