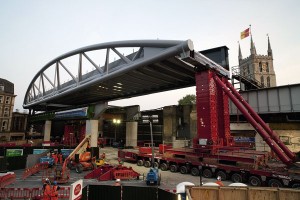 Work to increase train capacity in and around the busy London Bridge Station continues apace as a new steel bridge was launched into position during the recent Bank Holiday.

Fabricated and installed by Watson Steel Structures, the bridge is 72m long, 6m high and weighs 1,200t. Moving the assembled steel bridge started at 2am on Saturday morning and the adjacent road was then re-opened to traffic by 5am the following Tuesday.

The complicated engineering operation saw the bridge travel an average of 7mm per second using specialist jacking machinery, provided by Mammoet, before being lowered into place, creating a new landmark.

Martin Jurkowski, Network Rail Project Director said: “The new bridge will double the number of tracks coming out of the western end of London Bridge station, unlocking a major bottleneck and allowing us to provide two dedicated tracks for Thameslink services.”

The bridge is part of the 507m-long Borough Viaduct which runs above the highly built up Borough Market area of south London.