September 1, 2006 by NSC2 in Projects and Features 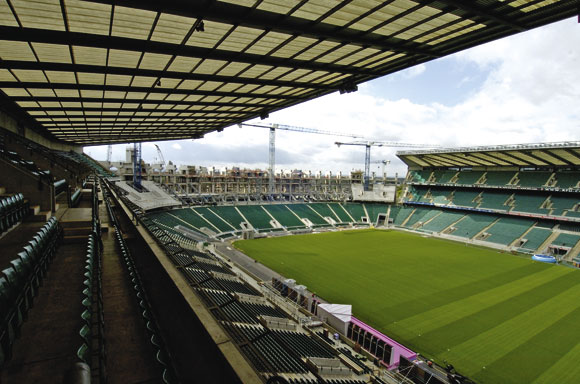 Once complete, Twickenham will be a wrap-around arena

The new South Stand at England’s home of Rugby Union will increase the ground’s capacity and incorporate a hotel, conference and banqueting facilities, and a performing arts centre. Martin Cooper reports on how steel competed in the line-out.

England’s Rugby Union team will kick off its Autumn international fixture list on 4 November, against New Zealand, in front of the largest-ever Twickenham crowd.

The match against the All Blacks will be the first time the new South Stand will be fully open with its three tiers raising the historic stadium’s capacity to 82,000. The stand’s lower tier has already been used during this year’s Six Nations tournament.

However, the November date won’t herald the end of the project’s construction. As David Goward, Carillion Project Manager explains, there will still be a considerable amount of work to complete once the Autumn matches are over.

“During December the roof structure will begin to be craned into position, while final full fit-out of the hotel and conference centre – which is a contract that hasn’t been awarded yet – won’t be complete until Summer 2007,” Mr Goward says.

Once all of this work is finished, the Rugby Football Union (RFU) will not only have one of the world’s foremost sporting arenas, but also the largest dedicated Rugby stadium in the world.

The South Stand will make the arena a complete wrap-round bowl. The obvious difference being the commercial development behind the stand which will include a 200 bedroom four star hotel, a health and fitness centre, conference and banqueting facilities and offices.

Interestingly Carillion inherited an historic involvement with the project since its acquisition of Mowlem earlier this year. Mowlem built Twickenham’s North, East and West stands during the 1990s and it seemed fitting that it should be awarded the contract, in 2005, for the final piece in the redevelopment scheme. 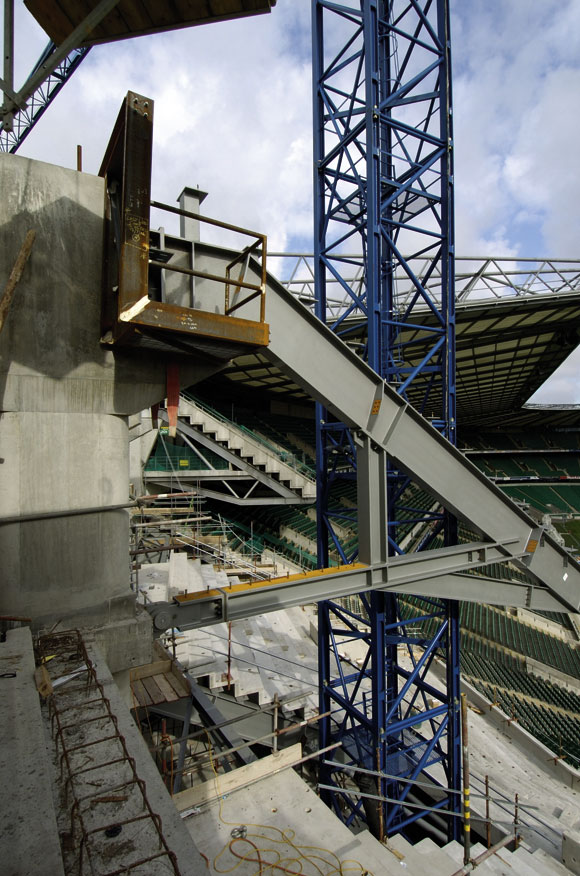 The new stand will complete the Twickenham redevelopment 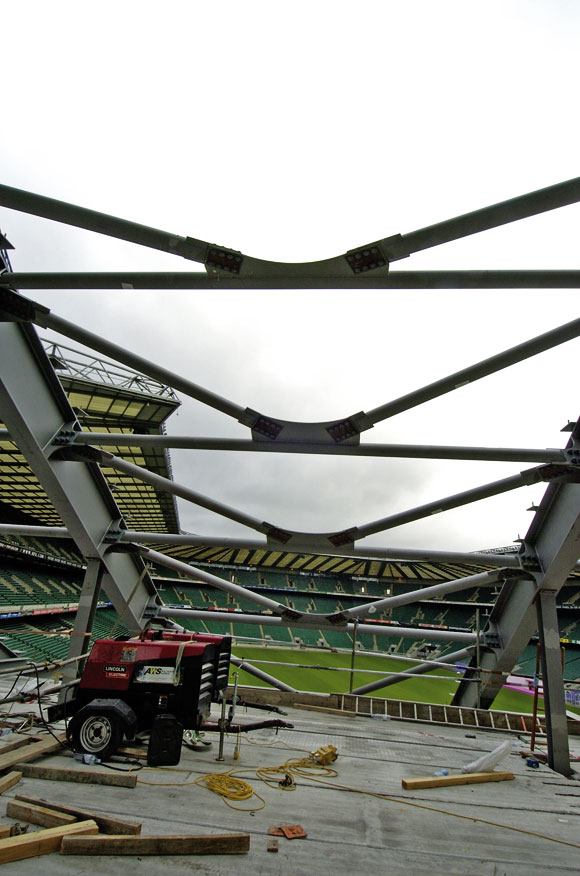 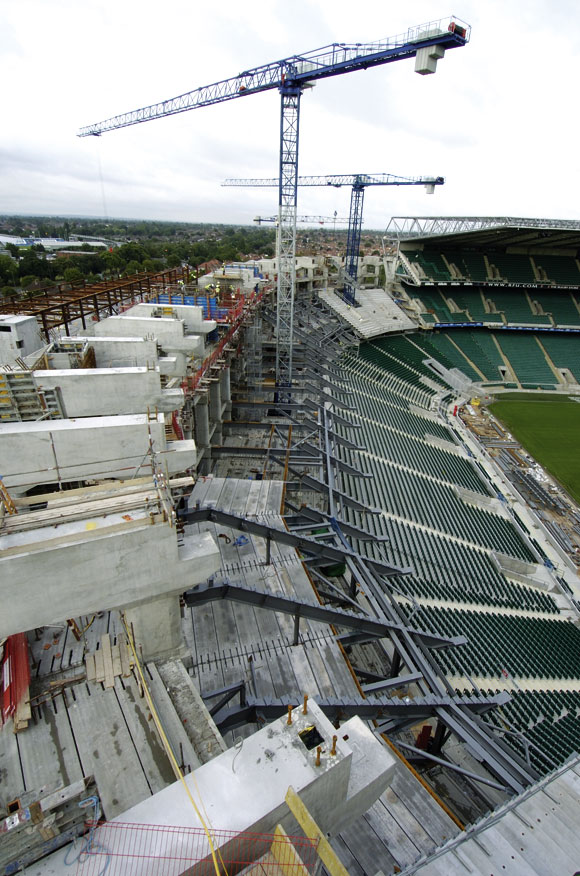 The roof will be erected in December 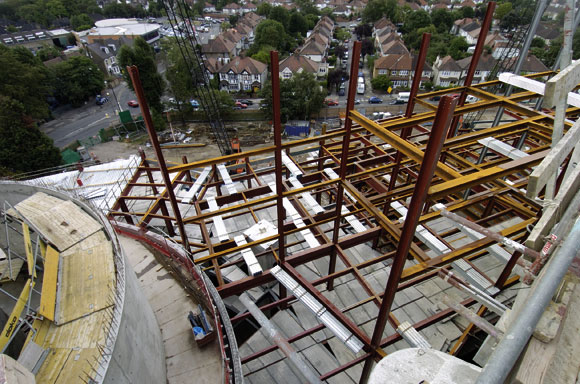 The company arrived on site on 18 July 2005, eight days after Controlled Demolition, who had already been appointed by the client, had blown down the existing two tier South Stand.

While the area was being cleared and new piles installed, a large amount of the concrete and steelwork was already being fabricated off-site. “Our contract has eight ‘access dates’ written into it, where the new stand has to be made available to the RFU,” Mr Goward says.

Consequently, time was of the essence, as the first date which the RFU would require the stand was for the opening Six Nations match with Wales in February 2006. For this game, the 7,600 seat capacity lower tier had to complete.

“Arup decided on pre-cast concrete units for the lower tier as it would speed up on site construction,” Mr Goward explains.

Paul Simmonite, Project Manager for Arup agrees and says the available time windows for construction also meant much of the steelwork was pre-ordered and fabricated off-site at an early stage by Cleveland Bridge.

Although much of the lower grandstand tier and the structure’s spine has been constructed with pre-cast concrete the attached middle and upper tiers are steel framed with concrete sections for the terracing. Meanwhile the commercial centre which wraps around the rear of the stand and the entire cantilevered roof are also steel structures.

Andy Hall, Operations Manager for Cleveland Bridge says the company is supplying and erecting an array of UB and tubes for the stand with the largest weighing 6.5t. “We’ve also erected 27 rakers for the mid and upper tiers, one for each grid line, with a maximum lift of 6.5t,” he adds.

The upper tier cantilevers out from the rest of the structure by 12m. This, says Mr Simmonite caused a fair amount of head-scratching during the design stage as the stand had to be constructed to allow for the enthusiastic rugby crowds celebrating at the tip of the tier. “Nothing out of the ordinary but the cantilever just needed a little more designing,” he says.

As far as Mr Simmonite is concerned one of the biggest challenges in the design of the upper tier was creating enough clear space in the concourse to allow all of the spectators to escape down the access ramps. This meant this tier couldn’t be braced in the same way as the existing stands, and consequently the steel connections are designed to take significant moments and shears to generate frame action.

“The upper tier raker is deeper than existing stands,” Mr Simmonite points out. “The raker is anchored to the concrete frame using six high tensile macalloy bars cast with the RC works.”

The middle tier is quite unconventional, says Mr Simmonite. “The stadium is designed to allow vehicles under the stand in the 14m wide open concourse. The middle tier sits above the lower concourse and it wasn’t possible to support it on conventional columns,” He explains. “Instead, steel raking columns are used to support the concourse steelwork which also props the steel rakers.”

Topping the stand is a steel-framed roof which will be erected from 27 trusses and in-filled with purlings and a translucent cladding. The roof has a 41m cantilever from the base column.

Architects for the project, Ward McHugh says the roof’s structural form provides unimpeded views of the whole playing area by means of the cantilever tubular steel roof, which allows the flexibility to wrap around the corners as well as providing sufficient weather protection.

“The plan is to erect the steel roof after the Autumn internationals are finished in December,” Mr Hall says. The roof trusses are assembled on site and then lifted into position in pairs of 16m, 14m and 11m lengths with a maximum weight of 13t.

Meanwhile, Mr Simmonite comments that steel was primarily used in the commercial building because of the need for large open plan areas for the conference and banqueting rooms, as well as a large span over the building’s indoor swimming pool.

Adjoining the 40m-high stand, the commercial and hotel complex is a stepped structure rising to six floors at the centre with a maximum height of 25m. As the lower two levels of the building house the open-plan areas, this means the structure’s grid lines alter significantly from the third level upwards.

According to Mr Simmonite a total of 48 transfer beams have been used to give the lower levels their relatively column free layout.

The largest of these beams are two 26t 26m-long plate girders used to span the banqueting area and the complex’s swimming pool.

Mr Hall adds the company is supplying and erecting steelwork for two separate packages; 3,000t for the commercial and hotel complex and a further 1,500t for the grandstand.

“The commercial zone is the biggest package and we are basically supplying and erecting beams and columns,” Mr Hall says. “The largest beams have been 5t 12m-long sections.”

Cleveland Bridge is fabricating all steelwork at its Darlington yard and assembling all sections on site. “No steelwork element for the commercial zone has been that big, so everything has easily been craned into position,” Mr Hall adds.

As well as three tower cranes being used to erect the grandstand, the commercial zone is being built with the aid of two 70t capacity mobile cranes.

The steelwork for the commercial zone is scheduled to be complete by October, beating the stand by a couple of weeks. Once the final the fit-out is finished in May 2007, there is little doubt that Twickenham’s redevelopment will have provided English rugby with the world-class stadium it deserves.