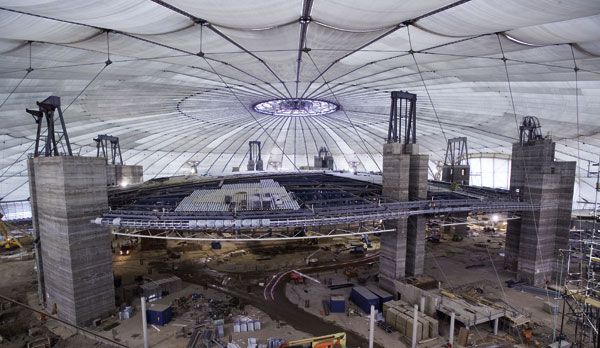 Situated inside the original Millennium Dome, the 02 Arena has been designed to be the most technically and acoustically advanced concert arena in Europe.

Constructing a building within an existing structure presented many challenges for the project team. The success of the unique design of the O2 Arena, and its innovative construction method, are testament to the team’s positive approach, and the strong support network.

Successful construction was partly due to the engineering design that considered buildability from the outset, including the constraint of being positioned within the existing structure.

Approximately 5,000t of structural steelwork was used for the O2 arena’s bowl structure and outlying buildings. However, the main challenge was the 2,500t steel roof (4,000t when fully clad) for the arena, which has only 4m clearance below the dome’s fabric roof.

Using tower cranes within the dome to erect the roof was out of the question, says Ken Jones, Associate Director at Buro Happold. “There just isn’t the room.”

So the roof was initially assembled on trestles on the dome’s floor and then jacked into position. The roof of the arena also means the project is ‘future proofed’ and could stand-alone if the enclosing dome structure was ever dismantled.

Mr Jones says the design and construction of the arena’s roof drove the early stages of the project.

Watson Steel Structures fabricated the roof’s steelwork at its Bolton facility and transported sections to the site in pieces no larger than 3.5m wide or 22m long.

The roof is made up of two primary trusses, each of tubular construction and 130m long, which were brought to site in sections and welded together on the ground. Spanning the void between the primary trusses are 16 central trusses with spans ranging from 30m to 60m. 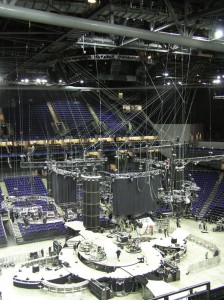 Each of these members has a depth of more than 5m. Radiating from the primary trusses are four secondary trusses which are 5m deep and nearly 40m long.

As Mr Jones explains, this is no ordinary roof, as the spherically-shaped structure is 11m deep at its apex and very deep trusses were required because of its 150m maximum span. This roof space is needed for a vast array of equipment weighing up to 50t.

The scale of the roof, and the building movements and deflections for this type of span, made steel the best option for creating a simple, independent building enclosure. Steel was also the optimum choice given the interfaces with key components such as acoustics, cladding, sports lighting and a giant scoreboard. It also provided the most lightweight structure possible, enabling an economic and buildable final solution.

Safe erection of the roof was done with strand jacking and most of the work was undertaken at a relatively low level, using small cranes. Combined teamwork was adopted for the design of the temporary works required to lift the roof.

The positioning of the 4,000t roof in a single lift involved the use of multiple capacity strand jacks that were monitored by both position and load. A bespoke computerised surveying technique was also used, which allowed designated positions to be observed in real time.