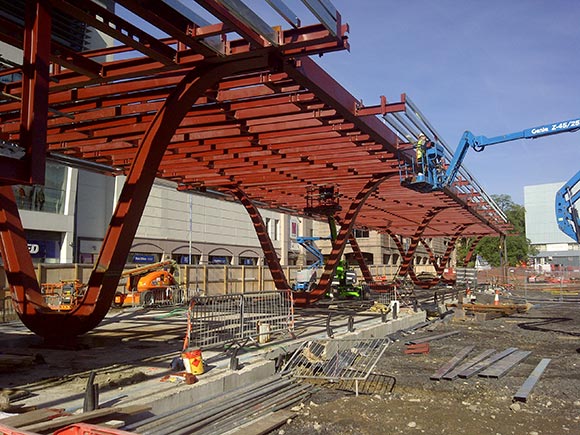 An exacting erection process was necessary for the installation of six feature columns that form Blackburn’s new iconic bus station.

Situated in the middle of the town’s main shopping district, the facility will replace the existing bus station that has been described as increasingly inadequate.

Kate Hollern, Labour Leader of the local council says the bus station was a key part of the town’s regeneration. “It will bring major improvements for bus passengers as well as better transport links.”

John Threlfall, Business Director at Lancashire United (the local bus operator) says: “We are delighted as it will be an improvement for passengers to have a warm covered bus station rather than the existing wet and windswept facility.” 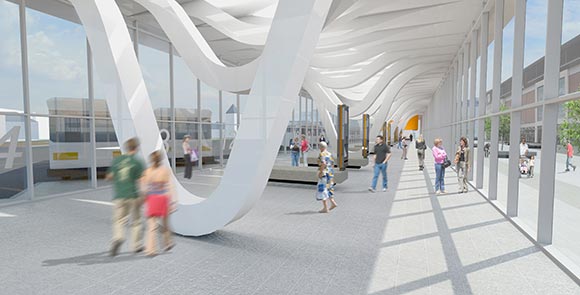 How the new bus station will look

The structure is approximately 80m-long with an office hub positioned at one end. Conceived as a giant canopy, it has a 5m-high perimeter glazing system that will create a fully enclosed, but light-filled, concourse. Overhead, the bus station will be topped with a partially glazed pitched roof, which will let even more natural light into the building.

Supporting the roof and the glazing system are the most visual and architectural elements of the new facility; six centrally positioned double looped supporting columns. Said by some to resemble cow horns, the columns are 5m high with a maximum distance of 12m between the tips.

Even though the steel columns are located in the middle of the station they still manage to create the architectural vision of an open plan space. Centrally positioned holding down bolts help give the impression of the columns hanging from the roof as opposed to holding the structure up.

Adding to the architectural vision, a series of smaller GRP formed loops, positioned between the steel looped columns, will create a cascading effect to the roof.

“The columns are structurally important as well as being a major aspect of the design as they are moment frames giving the overall structure much of its stability,” explains Brendan Cassidy, Capita Design Engineer. 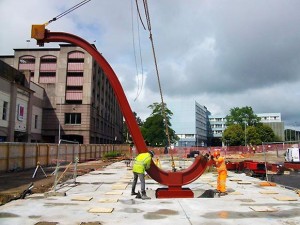 “There were a number of challenges associated with the looped columns,” says Andrew Roberts, EvadX Project Manager. “Not just how to fabricate and erect them, but also how we could transport them to site.”

The answer was for EvadX to subcontract steel specialist Jamestown Profiling to fabricate the six columns in a specially designed jig (see box).

Once the loops reached site the erection procedure involved first installing the longest part of each column, which included the base plate. Once this was in position, along with a supporting temporary prop, the other piece of the loop column was bolted into place.

“Once we had both pieces bolted and propped and we were sure the second piece was in the correct position the splices were then site welded,” adds Mr Roberts.

Each erected column also included a temporary tie positioned along the top for added positional accuracy.

“The base plates have 16 post-tensioned Macalloy rods set into concrete bases,” explains Mr Roberts. “These were tightened after the columns were installed as the final adjustment to make sure the steelwork was rigid.”

This then allowed the temporary props to be removed and the rest of the steelwork for the roof to be erected.

The roof steelwork consists of a series of 13m-long horizontal members that link the six columns together on each side, acting as eaves ties.

A further series of smaller box sections, spaced at 800mm centres, then span across the top of the columns, to form the roof structure.

The looped columns are all spaced at 13.5m, except for two at one end where the spacing is a much longer 25m. This wider zone accommodates a steel framed two-storey office hub.

“As it is connected to the canopy roof steelwork the hub columns provide the structure with some added stability,” says Mr Cassidy.

Stability for such an unusual building is crucial and the exterior glazing system that is attached to the roof steelwork via brackets provides further stability. “

Lateral load will be transferred from the glazing through the roof steelwork and then down the looped columns,” adds Mr Cassidy.

Blackburn’s new modern bus station will be fully covered, have 14 stands and feature the latest technology to allow passengers to plan their journeys by bus. It will also be fully manned improving security and providing the travelling public with customer information and ticket purchase facilities. There will also be refreshment and toilet facilities.

Summing up, Andy Smith, Thomas Barnes Contracts Manager says: “This innovative cutting edge design will become a benchmark of quality construction within the town that will help transform the current area into a vibrant modern looking facility.

The site has brought up challenges with unknown subways and obstructions being found and removed, and service diversions hindering progress. We look forward to a successful completion.

Blackburn bus station is scheduled to be completed early in the New Year. 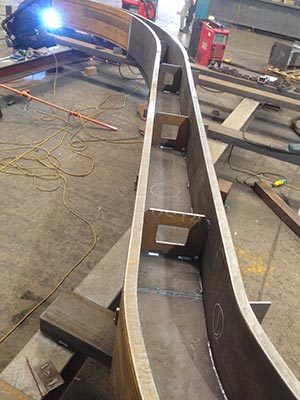 Each column consists of five sections welded together, all of which had been previously bent into the desired shape by a specialist bending company.

“The columns are all very similar, so once we had made a reusable jig we were then able to fabricate each member in fairly rapid succession,” says Niall Fortune, Jamestown Profiling Production Manager.

Each fully fabricated column weighs 7.8t, but prior to being delivered to site each member was cut into two pieces to aid transportation. The longest piece was fitted with an internal spigot to aid onsite assembly and both pieces were sent to site with welded plates attached for the final bolted connection.