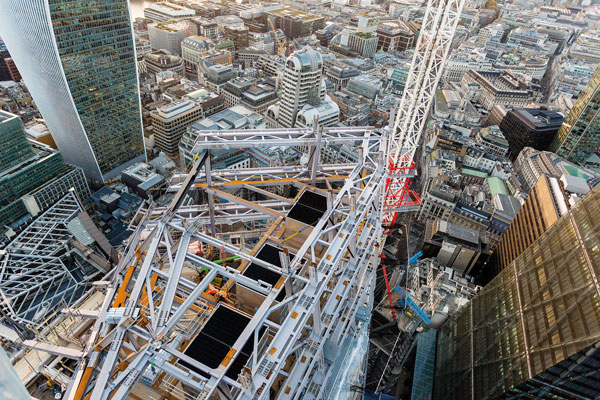 Known as the Scalpel, 52 Lime Street is a dramatic, sleek and geometrical addition to the high-rise City of London landscape.

Setting it apart from its neighbours in the City of London’s cluster of high-rise buildings, the Scalpel features an inclined northern façade, which has a diagonal fold line running from top to bottom.

This façade is formed by a series of cranked plate girder columns, spaced at 6m centres. For the double-height ground floor these columns are vertical, but from the first floor they are cranked and slope inwards all the way to the building’s pointed top.

Overall the structure has 42-storeys, including 36,966m² of internal office space spread over 35 floors. It is said to be a tall, yet sympathetic addition to the City, designed with particular regard to distant and local views.

The tower leans in such a way that it is invisible behind the dome of St Paul’s Cathedral when approached from the west along Fleet Street, while the roofline falls away sharply to the south in recognition of the overall composition of the City cluster. 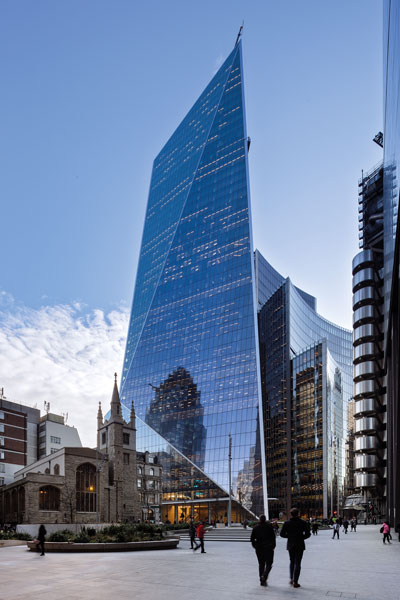 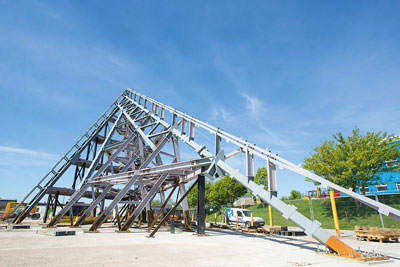 The structural frame consists of a composite design with steelwork supporting metal decking and a concrete slab. All of the floor beams are 670mm-deep fabricated plate girders with service holes to allow service integration within the structural void.

Commenting on the decision to use a steel framing solution Skanska Project Director Ian Perry says: “Using steelwork is the most efficient option for this type of construction project as buildability and speed of construction are vital on a city centre job.”

The use of steelwork allowed the scheme to achieve a greater floor space, which was one of the client’s specifications.

Unlike many commercial buildings, the Scalpel’s main core is offset and positioned along the south elevation, which allows the structure to maximise its internal floor space with spans of up to 20m.

Having an offset core, coupled with an inclined north elevation, means that the loads on the building are eccentric from the main stability-giving core. To counteract this, the north elevation, as well as the east and west façades, were designed as large perimeter moment frames to add stiffness to the building. The frames also allowed the steel erection to continue with a minimal temporary works needed, which significantly reduced cost during construction.

Cost also plays an important role in any construction project and the use of a BIM model on this scheme helped the team ensure the steel frame was as efficient as possible.

“We made a considerable weight saving as all of the beams have varying flanges and webs depending on the relevant loadings,” explains Arup Project Engineer Steve McKechnie. “All of this was worked out automatically via the BIM model.”

Steelwork contractor William Hare undertook and completed a complex construction sequence to complete the project. One of the main challenges was one of the final elements – the iconic triangular attic.

Positioned at the peak of the structure, the 10-storey triangular attic houses the plant and maintenance walkways. In order to make the erection of the attic structure as smooth as possible this portion of the building was trial erected in the fabrication yard, so the extremely complex fabrication and tight tolerances could be fully tested and proven.

Following the trial assembly, the structure was dismantled and transported to London in the largest possible pieces, in order to reduce the piece count and allow for erection on-site by tower cranes.

William Hare says the use of a complex pre-set strategy ensured the final position of the structure was within design tolerances. The attic was designed to be erected floor level by floor level, with each immediately stable upon erection.

Designing the attic in this way was vital as there is no core at the top of the building to give stability and no internal floors to provide diaphragm action.

The triangular shape of The Scalpel and the prevailing south-westerly winds that regularly hit the structure’s narrowest point, meant that a total of seven viscous dampers had to be installed within the north elevation of the steelwork.

Viscous dampers are hydraulic devices that dissipate the kinetic energy of the building and stop the build-up of uncomfortable side-to-side accelerations in a wind storm, improving the user experience and the durability of the building. It is said that by designing the viscous dampers into the stability system of the building they provide damping at a fraction of the cost and use less space than traditional ‘Tuned Mass Dampers’.

In summary, the judges say taking its place within the cluster of prestigious tall buildings in London’s financial centre, the distinct inclined outlines of ‘The Scalpel’ complement the surrounding profiles.

Ground-breaking savings in both costs and embodied carbon have been achieved by innovative solutions including integral damping and advanced digital design. Advanced use of BIM, along with full-scale trials enabled compact integration, maximising letting areas.